“How about... we try it?”Bookmark here

“I’ll do it. If you do. If you want.”Bookmark here

“Me too. Just to see what it’s like.”Bookmark here

That was one week ago. And that unease Claudia had felt then was still definitely there inside of her. But it also came with an even mix of what she could only describe as... giddiness. Her heart going pitter-patter every time she thought about it. Her face going so red you could hardly tell where her hairline ended and her head began.Bookmark here

Despite all of that dramatic love confessioning, that stand-off in the middle of the computer lab as the artificial sun dimmed out in the window... Claudia still felt just as anxious and nerve-wracked as she did before. She thought this was supposed to resolve when she let all her feelings out, right? The fact nothing had changed inside of her surely meant that she was emotionally broken; that or crushes didn’t just go away after you resolved them.Bookmark here

Her mind replayed the scene over and over; it looped like a corrupted video file, trying to get past a certain moment and glitching every time. It was stuck on placing her mind on those specific moments, those tiny details that had stuck firm in her mind like a jar of jam thrown against a wall.Bookmark here

Nono’s wrinkled skirt and her hands straightening it out. The desk in front of her turned slightly askew. A loose paper on the lectern, left behind by a teacher. The screensaver on the computer showing a bouncing colorful logo for BlythCorp. Amira’s focused gaze and her amber eyes shimmering against the dimming sun. A bead of sweat dripping from Claudia’s armpit to the bottom of her shirt.Bookmark here

It all played in a flurry, all of the tension and heart-pounding returning every time her mind decided to drudge it back to the forefront of her memories.Bookmark here

Only a hundred and forty-four people had died this year on the Horus One. In all its twenty-five years travelling to New Memphis, only three thousand had passed away of any cause, a near-miracle even for colony ships. And now all Claudia could think about was the possibility that she was going to be the next one to add to that count, all from heartache.Bookmark here

Today was a bad day to go to Friday classes.Bookmark here

Claudia could hardly concentrate on the lesson, and no matter how much she liked her Earth Literature class, no discussion of Mizukami was going to help get her mind off her new relationship status.Bookmark here

“...published Hourou Sekai,” the teacher said. “And that’s why our ship takes some of the precautions with AI that it does, some have argued. Can literature be that powerful? Ms. Bakhoum? Do you care to add in?”Bookmark here

Claudia was already blushing, but it looked like she was going to do it even more. “I... um...”Bookmark here

The teacher shook her head. “It seems like this morning wasn’t good for getting into such a heavy subject after all. Judging by these glazed-over eyes I keep seeing, I think we’re going to call this one early.”Bookmark here

The class did not meet this decision with very much disappointment. Students all around the classroom shot up from their desks and began filing out of the room. The fact that Friday morning classes were fully optional meant that typically everyone in the class was fully-engaged, especially now that the ship was so close to landing and practical education was starting to actually matter. But it seemed like today was not a good one for keeping attention after all. She had a semi-legitimate excuse, but she had no idea why everyone else might be feeling the same way.Bookmark here

Claudia, for her part, at least put all her books and folders neatly into her bag and used the reflection off the window to make sure her hair and face looked fine. It only took a minute of time, but even then she was already one of the last ones in the classroom left to leave. It was just the teacher jotting down some lesson notes, and then Petra, who seemed to be waiting for her for some reason.Bookmark here

“Hey, Claudia,” Petra said. “Just wanted to know if you were still on for this afternoon.”Bookmark here

Crap. She had completely forgotten. The two of them had made plans to go out to the Desert Wheel and do some sightseeing. That was like, two months ago though... Agh, so much was different now.Bookmark here

“Actually, can we, uh, reschedule that?” Claudia asked.Bookmark here

Petra smiled, but it was clearly in disappointment. “Nah, it’s okay. I understand if you’re busier lately. I’ll have to trade the passes at the market, but...”Bookmark here

“Go have fun with your new friends. It’s fine.” And with that, Petra power-walked out of the classroom and away from Claudia.Bookmark here

She sighed. Why did she have to say that she made other plans like that...Bookmark here

Really, all of this love stuff had shifted everything since the start of the new year. It was less like a shift and more like a complete revolution in every way. This new arrangement was just an extension of the fact that she was spending a whole lot more time with new people and probably isolating herself from people like Petra who she’d been friends with since she was a kid. That was the cost of romance sometimes.Bookmark here

But she didn’t really regret it. For all the anxious heart-melting inside of her, turning her into a blob of mixed emotions, she couldn’t say she regretted any of it. She honestly... enjoyed it.Bookmark here

And that flash of joy was exactly what she felt when she saw them standing outside the doorway. Two pairs of eyes, two sets of smiles. Both were wearing their school uniforms this morning despite the fact they didn’t go to school on Fridays.Bookmark here

Claudia blushed yet again; she really couldn’t help it at this point. “Hey, guys.”Bookmark here

“How come you guys are getting out so early?” Nono asked, her yellow bangs bouncing as she tilted her head to the side in curiosity. Despite being just over a year younger than her, she still couldn’t help looking on her like an adorable junior. She stood a whole head shorter than the other two, and the way her smile radiated... darn she was cute.Bookmark here

“Everybody was too distracted, so the teacher gave up,” said Claudia.Bookmark here

“Aww, so you don’t get your extra study time?” Amira asked, smirking. With a sharp nose and sharper wit, she had essentially sliced her way into Claudia’s life these past few months starting from the day they got sorted into the same class. Their relationship had moved faster than a wheel around a ship but she wouldn’t have it any other way.Bookmark here

“Actually... I’m more glad to be with you two a bit longer,” she said. “Not to sound cheesy or anything.”Bookmark here

Now it was Amira’s turn to blush. She ran her finger through her dark-blue hair and pushed a few strands behind her ear. “W-well, let’s head on over to my house. My mom’s got lunch cooking. It’s fried noodles!”Bookmark here

“Alright, alright, just let me get my clothes out of my locker,” she said.Bookmark here

“No, your uniform is fine, let’s go,” the other two said in unison. They took both of Claudia’s arms and started dragging her towards the exit.Bookmark here

When she was actually with Nono and Amira, that feeling of her heart back to explode subsided. It always did. She wished that it wasn’t there at any point, but when she was around the two of them, the only thing she felt was warm... and that was fine with Claudia.Bookmark here 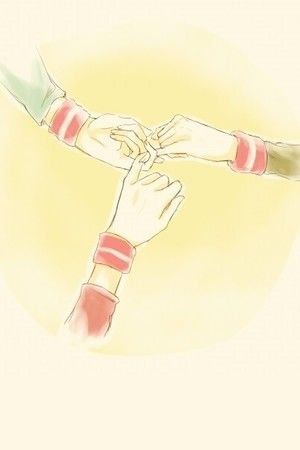