My Dad is an Otaku, My Mom is a Fujoshi, and I Wish I Was Dead

I’m sure most of you know this story.

There’s this guy. He loves anime and manga and video games and everything like that, just the same as you do. He’s completely ordinary. There is nothing special about him. He has no talents and no skills. He has no friends except, maybe, for people who are even lower than he is. The only thing he has is his passionate love for his favorite media, which ends up looking embarrassing to anyone with half an understanding of social situations. In every sense of the word, he is a loser.

Yet no matter what obstacles life and society throw his way, he continues to persevere without ever losing his love for his passions. He is subjected to ridicule, ostracism, and sometimes even violence from the bullies of this world, but he soldiers on, and because of that, you start to root for him.

In time, he falls in love with a girl, or maybe she falls in love with him. Or maybe there’s more than one girl. He fights tooth-and-nail to win her love, against jerk ex-boyfriends, social stigmas, and the cruel whims of fate. In the end, he succeeds. She reveals that she also loves the same things that he loves, and after years of wacky comedy and serious drama, they become a couple.

What happens after that? Well, no one knows. The story always ends there. It’s designed to make the person who buys it in the bookstore happy and nothing else.

He’s an otaku just like me, and if he can get a girlfriend, surely I can too.

That’s all there is to it.

But, I repeat, has anyone ever wondered what happens after the story ends? What happens when the dogged otaku protagonist gets the girl of his dreams and they confess their love to each other? Do they stay together until the end of time, watching magical girl anime together until they turn old and gray? Do they have forty grandkids who all grow up to be otaku, too? Do they break up six months later?

What really happens after the story ends? 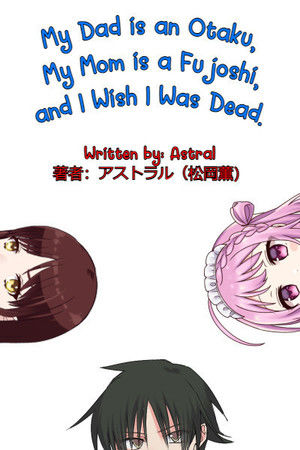 My Dad is an Otaku, My Mom is a Fujoshi, and I Wish I Was Dead