Warden of Success - A Soft LitRPG

Music. Near the front of the bus, a young man strums a lute, reciting Shakespearian poetry. Troubadour. That's his ‘profession’. People who cling to the arts, travelling to and fro, singing the praise of the olde days.

"I would totally bang an android." Says another man to my right, loud enough that everyone nearby can hear. "Like, think about it; all I'm saying is that synthetic shit is so close to real that you won't be able to tell the difference."

"What's it to you?" Another replies. "Not like you'd be able to tell the difference."

"Man, what are you saying?"

"I'm saying you have nothing to compare it to, dumbass, so how would you be able to tell if that 'synthetic shit' feels real or not?"

Churls, the lot of them. No better than vermin. Discuss all the shit you want, but do it in the privacy of seclusion, dammit. Their words continue to annoy me. So much so that it leads me to wonder if I should follow them out later, get them sufficiently angry, and use that as an excuse to maul them. Can I win? I think so. Almost definitely. Yes.

I'm better now. Stronger than before. I have no concrete proof but a promise and a blue box, and yet I'm almost certain even so.

A swerve of a bus, and I almost fall forward (the phone in my left hand barely clutched).

I grab the nearby pole just in time.

Then, a flare of anger. I want to do something. My mind considers what it might be, rationalises it, moulds it into a concept and a word. But that's unnecessary. I already know deep down.

I want to hurt something.

"Sorry, everyone, a minor bump on the road."

The speakers blare with an apology. Suddenly, I'm much calmer.

"Ah, that be the long and the short of it!" the troubadour exclaims, looking to satiate his narcissistic self-indulgence.

Distasteful. A fraction of my anger returns. I want to critique the line he just sputtered. The problem is that his character is inconsistent.

First of all, it's 'That is the long and the short of it', so he didn't even nail the easiest part. And second of all, it's a damned Shakespeare quote, and he's dressed up as a 12th-century Troubadour, so there's literally no thematic consistency whatsoever.

I suppress my angst with a breath. As it happens, the bus stops, prompting half the people to exit.

Not many people enter at this point. Even less so during these trying times.

Fear gets around quickly, after all, you’d never imagine it, but there’s a killer around these parts.

Death as you would have it, strikes even the remotest backwater places in the world, claiming victims both young and old. I look over at my hands, the fingers vibrating to the minuscule extent where I have to wonder if I’m imagining it.

Saliva catches in my throat. I choke at the disturbing thought.

Must be my lucky day.

Over the next minute, I stare into empty space, pleased. Eventually, my eyes drift to a nearby wall, watching a peeled poster that happens to read, 'Do you think you have the skill? If so, apply for the King's Militia today.'

Did they have to make King Arthur this handsome? I know he's our royal liege and all, but he looks so young on that poster. Like, maybe twenty or so.

And they did have to draw him in such an art style?

Is our royal King really a mythological pretty boy?

Hah. That's a dumb question. Why am I contemplating things I know the answer to? In truth, I'm just envious that a single person can amass so much power.

My reverie breaks. I look to the source of that incessant sound.

A man. No, a boy, judging from the tone of his voice. Too young to be anything above nineteen, I reckon.

He walks to my front, standing too close for comfort, hanging tightly onto a metal pole.

I pretend to look at my phone. Out of the corner of my eye, though, I study him, analysing his appearance. He's wearing a green hoodie, wool even, a rich material and a pair of black trousers to match. These days, it's either that or tunics, gowns and chainmail.

After I examine his clothing, my interest takes me back to my phone.

Something catches my eye.

There's a mark on his left hand. Black. Abstractly shaped like a man's head. Gladius held in the centre, a vaguely green wreath running through it.

Symbol of resistance. Self-proclaimed rival of the King himself.

I continue to look, entranced, watching the hand near to the point that it's right in front of my phone.

Onto the wet asphalt pavement, I step.

Under the fluorescent scowl of yellow street lamps, I observe his figure, seeing it grow bigger with each upcoming second.

His body is so enticing—a lump of destructible flesh and blood ready for me to test.

We soon pass into a right corner. It looks like it's about time. Here, no one will see us. We’re in a narrow passageway, far too obscure to be noticed. There's even a ten-metre-long walk before he can exit the place, and even then, there's no one there.

"Thought you were real smart, huh?"

A stumble. He considers this a signal to run. My adrenaline-fueled heart refuses to let him go, prompting me into a sprint.

I cross three metres under a half-second.

Running in front of him, I slam my enemy into the wall.

A momentary relapse. I take in the situation, scrutinising his frightened expression, savouring the moment as a predator does to their prey.

"Think you're hot stuff, don't you?" I whisper. "This ain't your first rodeo, I can tell, but you picked the wrong person to hack, I'm afraid."

I cut him off mid-way, slamming him into the wall.

Then I pull back. Putting a arm’s length of distance between us.

"I believe I'll be reporting you to the police." I threaten, my feelings at an all-time high. "Here in Kingsville, I heard they don't take too kindly to your lot."

I feign stupidity, scratching at my chin and looking off-handedly to the distance.

It's already working. Unable to control himself, my opponent sends an awkward right hook my way.

Come to think of it, how long has it been since I actually fought?

On instinct, my right foot extends forward, and my body, using that momentum, takes both my arms and wraps it around my enemy, sending him back into the wall.

It was a near-instantaneous response. Cultivated by years of martial arts training. Enhanced further by my 'ability'. He lets out a moan of anguish.

I crane my neck and wait for my enemy to get up.

My surroundings are empty of movement.

Nothing. Only the subtle inhale and exhale of breath.

Maybe I overdid it.

Even in the dim light, I can tell my opponent’s faded into unconsciousness, eyes shut, no doubt in concussion.

The overwhelming heat in my chest reduces to a simmer.

Such as it is: the battle is over. Shame. I was looking forward to testing out my abilities, but I guess that’ll have to wait. The smile on my face lessens into a smirk.

Somewhat satisfied, I begin my long trek home. Knowing that although there’s still much to think about, that there’s no point in considering it so, and that whatever reservations I have will be both mine and someone else's burden.

I made my choice.

—too late for any regret whatsoever.

Whether I live or not.

—i know it's my own responsibility. 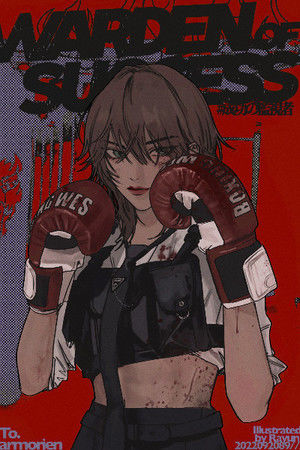 Warden of Success - A Soft LitRPG