Chapter 1: God likes to Fuck with You

A Guide on How To Not Survive a BL RPG World

God had his favorites. Sadly, you weren't one of them. Yes, he decided to give you, Rune Luft, the worst luck imaginable. So of course God decides that you would die in the most ridiculous way possible, death by escalator. That sounds stupid, right? How could anyone die that way?

You, apparently, whilst on your way to buy cold medicine for yourself. God decided it would be funny to kill you by a dysfunctional escalator. You remember vividly the pain of your bones crunching when you fell through the floor and you scrunch your nose up in disgust.

So then... How were you still alive? You woke up to find yourself in an alleyway, it was surprisingly well lit, looking up you could see the night sky, clouded with light pollution. The alleyway had metal pipes overhead with warm steam seeping out occasionally.

As any sensible person would do after they had supposedly died, you chose to wallow in despair. Thankfully you couldn't smell blood on your beloved jacket, your jeans were still intact.

Oh shit! You thought as your hands immediately went to your pockets.

Your phone was crushed into pieces in your pocket. Your wallet was still there but it was almost in pieces. In conclusion, you were stranded in some random city with nothing but the clothes on your back. The thought made you grimace, if you truly were dead, then was this supposed to be the afterlife?

Well… You wouldn’t really know until you decide to leave this god-forsaken alleyway, right?

Well god said fuck you once again when you’re suddenly whacked in the back of the head. Fuck! That hurt. But it wasn’t enough to knock you out sadly, you honestly would have preferred that to whatever nightmare you had to face outside the alleyway.

Sadly God chose to continue your suffering and you can vaguely hear the sound of an old man nagging at you. Looking down, you see a dumpy old man with a shiny bald head and thick silver beard, waving his cane around at you.

When you finally tuned in to what he was saying, the old geezer was ushering you to follow him inside. Inside where you ask? Well lo, and behold! A door appeared on the wall to your left with the old man holding the door open for you.

Suddenly you remembered the rules that your mother beat into your head… Don’t follow random strangers, she said… Don’t trust anyone when you’re someplace unknown… Pity your mother wasn’t here to scold you now as you followed the old man through the suspicious door.

You half expected to be led into some dingy dungeon and used as ransom for your poor family. But to your surprise, you were in some dusty workshop. There were all sorts of science-y type of equipment strewn across the shelves on the wall of the cramped room. A large table was in the middle of the room filled with an assortment of ingredients, from dried herbs to even containers with questionable animal parts inside them. There was just enough space for you to walk around the table and reach the counter at the end of the room.

The old man disappeared into another room behind the counter, leaving you to just awkwardly stand around. It was quite obvious this place was a shop, it definitely looked like something straight out of a fantasy. Taking a deep breath to calm your nerves, you noticed the faint scent of frankincense in the air. The old man gave you a nondescript vial of red liquid. You shook the bottle a bit questioningly, the cork on top kept the contents from spilling.

“Vell don’t just shtare at it. Yer shpposed to drink it” the shrewd old man said, he seemed rather annoyed that you were taking too long. His thick bushy brows were furrowed and his eyes narrowed at the vial in your hands. You look back at the vial as you cautiously remove the cork. A soft satisfying pop sounded and the scent of caramel apples wafted its way into your nostrils. Well, the questionable drink certainly seemed enticing now as you shut your eyes and tilted your head upwards to drink. The liquid was fizzy and warm as it went down your throat, you suddenly felt more energized and the throbbing at the back of your head had died down. You lick your lips for the rest of the droplets and look at the old man questioningly.

The old fellow shook his head and glared at you. Ah, was he expecting payment? You didn’t get the chance to tell him the bad news when he cut you off with his gruff voice “Yer veaker than I zhought you vere,” He said. Ok. Ouch. That certainly hurts your right in your nonexistent pride. But it wasn’t really your fault that you were weak and lanky. Three years of quarantine can do things to an introvert that already barely gets outside as it is.

But that was beside the point, the old man’s pale green eyes scanned your form. “Vhere are you from?” he asked. You bit your lip and stupidly stuttered out the city you were from. The old man didn’t seem to be convinced with your answer and you felt like you wanted to melt into a puddle from the sheer heat of his gaze. “And vhere exaktly is zhis city that you are from?” he asked, this time it was more demanding as if trying to coax something out of you. You told him the country you were from and that seemed to anger the old man even more.

“Look here you, Racker,” he said. What the hell was a Racker?! Was that an insult? Judging from his accent, was it German? Were you in Germany? The old man didn’t give you time to indulge yourself in your thoughts as he continued, “If ya ran away from yer folks ya should have just said that right away. Look at you, you’re pale as a ball of vool.”. The old man sighed and he handed you a thick book from the counter. You almost fell to the floor from its sheer weight. The title of the book had symbols of what looked like a mix of Nordic Runes and maybe Chinese. Though you couldn’t read it, you could understand it. Somehow. And that baffled you, it was like an RPG game where you can understand some unknown language. The old man sent you a displeased sigh and opened the door behind the counter.

“Oi, if you plan to stay ‘ere you better start learnin’. For an apprentice, you’ll do” the rugged old man said as he turned towards the door. “W-Wait!” You called out as you put the thick book back onto the counter and resting your hands onto the thick cover. You huffed and looked back at the old man, leaning towards him. “Where am I?!” You exclaimed at him. The old man looked back at you with a frown.

“Yer at the best Alchemist Schop in Eisenstadt, the one and only Mystiker, now ‘urry up and bring zhat book vit ya upshtairs.” were the old man’s final words before he disappeared from sight. Hah… You wanted to faint right then and there. Mystiker? Eisenstadt? You knew those names all too well. You covered your eyes with your hand as if to shield yourself from your own nightmare. “Shit…” You muttered. God truly was cruel to you. Of all things… You were isekai'd into the deadliest game you’d played as of recent. What. fucking. luck. 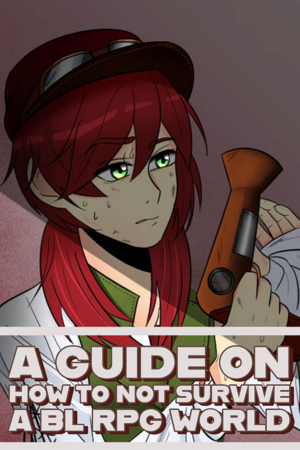 A Guide on How To Not Survive a BL RPG World