I had a dream last night. A wonderful dream. A dream like you only have once.

I thought I was sitting at the breakfast's table along with my parents. They talked to each other about adult cases while I was finishing to make disappear from my plate the toasts my mother prepared me. As soon as completed, I drank my hot chocolate. I feasted on that unique flavour: that sugary taste spreading in my mouth and this warmth filling up my veins gave me day after day the necessary energy to my busy days.

When I finished everything, I gazed at my mother. Her face shined, her mane made out of strands of gold floated around her and the rays of the sun, puncturing the living room's window, illuminated her entirely with a reassuring glow. My father talked to her, a limitless love drowned into her gaze.

Then my mother looked down at me and, taking consciousness that I was waiting for them, stated:

''Go ahead, my little man! Take your backpack and your father will drive you to school.''

Hence I stood up, without a word, displaying a resigned smile, and took my heavy backpack on my shoulders. My father hurried me a bit while my mother embraced me for a long time on my forehead giving me the feeling that she would never release me.

At the end I managed to get out and I joined my father who had moved forward, enclosing the beach. As we lived on a motu* my father had to drive me every day by boat to the main island where I began to walk until my school.

Hence I climbed on board while my father started the engine, after what the boat scurried tousling the waves. It picked up speed and I enjoyed it to fill my lungs with long bursts of lagoon's vivifying air.

Half an hour later, I entered my school. Until the bell, I used my time taking a walk before sitting under one of the three massive trees present in this place and where I loved to sit and dream.

At my first hour, after Mrs Ladder had done the roll call, she gave us back the corrected copies of our last week's History test.

It had been a rather difficult test, about the cold war. I was unable to remember the year when Staline died what, alas, braked my note. I obtained fourteen out of twenty. I was all the same satisfied, my grades in this assignment remained steady. Before putting it in my bag, I took a look on the name on my copy: "Tetuatini NUI, 3C". I don't know why but each time I saw my name and my class inscribed on a written medium, it made me smile...

My day happened like lightning as during class time I was absorbed by what were saying my professors and during the breaks I did nothing but laughing with my friends. The jokes we made were that stupid we couldn't help but guffaw each time...

At four o'clock, when the bell rang, the chairs squeaked, our math teacher winced in front of so much noise and it was a race to the exit of the class.

Then, the pupils scattered and, on my way to the dock where my father would come and take me home, I took a detour into the little shop located on the roadside where I wandered among the shelves of the store until finding what I was looking for: a scrumptious firi-firi*! While leaving the shop after I went to the checkout, I stepped up the pace so I don't keep my father waiting and I devoured my snack, not living a single crumb and remaining with my greasy fingers.

Once back on my motu, I left my backpack in my bedroom and, after taking a shower, I went to lay on the beach. The sand made me feel a tingle in my head to toe and I knew well that after I would have to comb minutiously my hair so that my mother wouldn't scold me. But I loved so much lying on the sand!

I lifted my head, the sun was dropping over the horizon while the sky was catching fire...

That's at that moment I wake up. I shed a tear. Above me nothing else than the neutral ceiling, starless, of my "room". I am lying in my hard and cold bed. Pale green curtains prevented me seeing whatever through the closed windows and I smell the sterile air invading the whole room. I have difficulties breathing. I carry with heaviness the one of my hands which is not pierced with transparent tubes and lay it to my forehead from where I run it along my sleek skull before dropping it on my ghastly sheets. I gaze around me, I distinguish a shadow against the wall, head low, eyes closed, a shredded smile; that's my father. I breath painstakingly. My mother, as for her, is sitting by my bedside. Silver threads get lost in her hair and somberly, defeated, she looks down at me. My breathing becomes inexistent. My mother who is no more than a blurred spot, notices it. She begins calling for someone, at least it seems to me so, because I don't hear more than a remote voice. But it is too late. Cancer wins the war. I close the eyes one last time.

*Firi-firi: a Polynesian speciality usually served at breakfast on Sunday. It is kind of a fritter made with coconut milk. 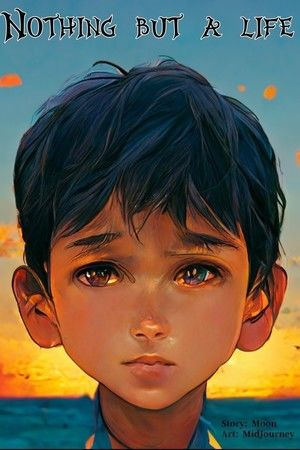