Love is a Game

Love is a Game [A Fair, no Fair Bonus Story]

"Dating is like a videogame; there are only so many mistakes you can make before it is game over," I thought as I parked my bike in front of the local arcade complex futuristically named ‘Stardust Galaxy’.

The arcade had been there for as long as I could remember. If I were to guess, the place must have opened its doors somewhere in the early 1980s. However, before that, the old, worn-down factory in which the arcade was located had served as the country’s leading producer of tea biscuits for a span of nearly 3 decades. (A fact that our history teacher loved to shove down our throats at any possible occasion.)

Although the arcade was most definitely past its prime, -if I were to believe Simon,- it was still a popular hangout spot for both children and young adults alike. Personally, I had no idea what to expect. I had not been back here since I was around the age of 11 and at the time, the place had been crawling with children. Sorry to say, but my ideal first date did not involve having to barge through a crowd of sugar-high middle schoolers. Then again, even though inviting me to an arcade for our first date had been an odd choice on Simon’s part, it was certainly more interesting than the common suggestions of going to the movies or going for a drink.

I was well aware that today might turn into a total disaster. What if we were overrun by a wave of noisy children and did not get to talk to each other in peace at all? What if I turned out to be a total loser at any and all of the games? Or, even worse, what if Simon got bored of me? I did know one thing for sure, however: getting the chance to impress Simon made all of those risks worth it.

I suddenly realized that I was stalling and took a deep breath to calm my nerves. When I had finally gathered enough courage, I hesitantly stepped into the building. The dimness of the interior was quite atmospheric but it was also a big change from the blinding sunlight outside, so I had to give my eyes a moment to adjust to the unexpected darkness. Aided by the bright lights of the various arcade machines, I could soon make out how the arcade looked on the inside and I was hit by a strong sense of nostalgia.

As I wandered around the complex looking for Simon, I let myself get swept away by the wave of memories crashing into me. Except for the replacement of some older, -and presumably broken- machines with newer, more popular games, the place did not look like it had changed much since my last visit. The layout of ‘Stardust Galaxy’ was still just as unruly as it had been the first time Jacob and I had spent a late afternoon discovering its many secrets. Blockbuster movie-themed pinball machines were standing next to modern, Japanese rhythm games, the old-fashioned camel race was sandwiched in between a coin dozer and a row of crane games; there was absolutely no rhyme or reason to the placement of any of the machines, but this absolute chaos somehow still managed to feel warm and welcoming.

I instantly got excited when I recognized some of the older games that I used to play with Jacob when we were younger but shifted my eyes to the worn-out carpet beneath my feet before I could be tempted to start playing without Simon. The carpet had a distinct 80’s vibe to it due to its brightly coloured, fairly random, geometric pattern. Actually, I could only guess that the carpet had once been brightly coloured as the colours had mostly faded away. Although the carpet looked worn out, it was surprisingly clean for a place where children used to run around with sodas and pizza slices in their grease, slippery hands.

Suddenly, I felt someone tug on my jacket and I turned around to see who it was. “Simon!” I exclaimed a bit too excitedly. I quickly coughed and tried to regain my composure, but the damage had already been done.

Simon chuckled and asked with a big smile: "You alright, buddy?"

"Yeah, yeah, I’m fine," I answered a tad nervously. "You know... the dust here is crazy. Shouldn’t have expected anything else from such an old arcade."

Simon rolled his eyes playfully and said: “I’m glad you could make it. I was afraid I wouldn’t be able to find you. This place is like a maze!” He grabbed my hand and started to lead me to a different section of the arcade. While we were walking he asked: "Have you ever been to an arcade before?"

The tension in my body flowed out of me as soon as I felt Simon’s touch. “I actually used to go to this arcade a lot back in the day with my friends, but I haven’t been back here in a long time,” I explained.

“Hm, so you’re already an expert, huh?” Simon smiled. “Don’t worry, I used to go here with my sister all the time when we were younger, so we’ll be a good match in terms of our experience and skill. We could choose a game that we’ve both never played before to make it more fair. I’ll choose one first!”

I shrugged. “Sure, why not? Do you have something in mind already? I do have to warn you that I might be a little rusty…”

“It’ll be fine,” Simon reassured me, “playing arcade games is just like riding a bicycle; once you’ve learned how to do it, you’ll never forget. I’m sure you’ll get the hang of it again in no time.” He then added excitably: “As for the game that I want to play, I noticed this one while I was searching for you and it looks like a lot of fun!” He pointed to a horrific-looking, zombie-shooting game.

I was very surprised and answered confused: “Are you sure you want to start off with this one? You don’t seem like the type of person to go for a gory, violent shooter…”

“Yeah, you’re right… I’m not,” Simon shyly admitted as he rummaged through his tote bag in search of a coin, “but I know that you enjoy playing first-person shooters with your team, so I thought this game would be a good start to our date.”

My heart almost leapt out of my chest when Simon mentioned his reason for wanting to play this game and I grabbed one of the plastic guns attached to the machine when he slipped his coin into the slot. I answered flabbergasted: “Wow, it’s so cool that you remembered that. I don’t even remember telling you that I like playing first-person shooters… I really appreciate it, Simon.”

“Don’t mention it.” Simon began blushing profusely and coyly tucked a strand of hair behind his ear before grabbing his own plastic gun. He then rolled his shoulders and sighed. “Alright, let’s see what we need to do… The instructions read: ‘Try to score as many points as you can by shooting zombies through the head. Shooting them in any other part of their bodies will slow them down, but will not kill them! Be careful not to be bitten or you will turn into a zombie yourself! Be smart and quickly reload your gun when you run out of ammo. The one who survives the longest or who has the most points when the time runs out will be crowned the winner.’ This should be easy enough. Do you want to try the game on simple, medium or hard?”

“Let’s try it on medium difficulty; we can always play another round if it’s too easy or difficult,” I answered. I was tightly holding my gun and had already begun to start concentrating on winning the game. If I managed to win the game, that would surely impress Simon, right? Hopefully, my experience in playing first-person shooters at home would give me a big advantage.

“Ready?” Simon asked while he selected medium difficulty. When I nodded, he immediately pressed the start button.

The high-definition zombie sprites would come in waves and each new horde was larger and stronger than the last. Our avatars quickly found themselves surrounded by a brain-hungry mob of decaying undead. After round one, I noticed that my gun had trouble reloading and I broke out in a cold sweat. I hastily looked over to Simon to see how he was doing.

Simon was fully immersed in the game and was absolutely killing it. Or rather, he was killing lots and lots of zombies. I had never seen him act so competitive before, but I would be lying if I said I did not like that change. To be completely honest, both the sharp, determined look in his dark brown eyes and the way in which he confidently sniped down zombies were actually… kind of hot.

I was so mesmerized by Simon that it was already too late when I finally noticed that a group of zombies was about to gang up on me. “Shit!” I yelled in anguish when my avatar was overrun by the horde of decomposing monsters.

Simon laughed mercilessly as a cutscene played in which his character put a bullet straight through the head of my now zombified avatar. My brain scattered all across the screen and in a deep voice the game declared: “Game over. Winner: Player 1.”.

“Booya!” Simon was thrilled about his unexpected victory and jumped up and down in excitement. “Suck on that, mister ‘I play FPS games every weekend.”

“You don’t have to rub it in,” I answered bitterly. Of course, I was disappointed that I just had my ass handed to me in a game genre that I should have excelled at, but I was even more upset that I had not had the chance to impress Simon. “And ‘booya’? Really? Is the 80’s theme of the arcade rubbing off on you?” I snickered in an attempt to lighten the mood, but I came across as more irritated than I would have liked.

Simon smiled and stuck out his tongue. “You don’t have to be such a sour loser, Burgundy. You already said you might be a little rusty, so let's consider this a warm-up round. There are plenty of other games you can try to beat me at! I’ll let you pick one this time!” 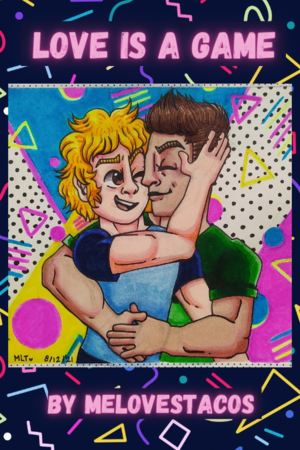 Love is a Game [A Fair, no Fair Bonus Story]