A World in Black and White

I open my eyes. My gaze wanders over the drab grey ceiling as it has done thousands of times before. Don't get me wrong, I've already had it dyed three times because it was too drab for me, first it was blue, then orange, then green, but even now it's still just as grey as the day I moved into my new flat.

I get up, walk to my dining table, eat my breakfast and watch TV, but there are only black and white films on. The people in these films, I like them. They laugh, they cry, they scream, but no matter how much you try to tell yourself that what you're seeing is real, you know deep down they're all actors. They pretend, they play their parts.

And isn't it all the more fascinating that in a world as grey as ours, there are 8 billion people collectively doing this play? Most of them start to love acting and build their own role. Some drop out, they see how stupid it all is. but many are put off by the uncertainty, the lack of a script and the not knowing what comes next.

I am one of those people, I live in a world, a black and white world, where I play a simple role that I don't enjoy, but my fear keeps me playing, because every time I stand on the balcony of my flat, the fear of what will happen after I step off the stage drives me almost mad.

I would love to ask people "are you like me" but the laughter, even if I only imagine it, stops me. Isn't that pathetic? I live a life that I don't like, that I would like to say I don't care about, and yet I'm afraid of what people think of me.

Maybe I'm not an actor after all, maybe I'm sitting alone in a theatre with 8 billion seats surrounding me and watching all the people who were sitting quietly in their seats until now storm onto the stage, all of them pining for my attention while they don't care about me or them.

I like that idea, I’m not an actor, I’m the viewer. That idea of sitting somewhere alone watching a documentary called "My Life 3D 4K", I bought it 22 years ago for my mother's price in a hospital and on the box it says in big letters "In colour".

I smile, it feels good, I still don't have the courage to leave my seat, to follow my mother, but I don't have to.

As long as I can sit here alone, as long as the world lets me watch, as long as I can just have a moment where I don't have to act, even if it is only oh so short or infinitely long, as long as I have time, everything is good. Whether it's a second or until the end of time, I just want a moment to think about what happened, because this world is not funny, it's not fun, it's not fair, but it can write stories if it wants to. And those stories, as sad as they are, as long as they go, as much as you want to change them, are in colour and that's all that matters. 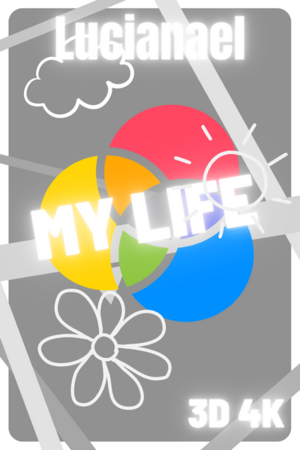