Waking in the Woods

Did you ever experience something so incredible, you just knew that you'd remember it forever? Certain points in life must be considered life-changing. That's just how significant they were. These rare moments would influence your entire future...Bookmark here

Edelgard would have considered this one such moment, if not for a simple problem...Bookmark here

She didn't remember how she got here.Bookmark here

She wasn't even certain that Edelgard was her name... what was a name, anyway? It circled her head as if it was a natural law, though she didn't understand it.Bookmark here

Edelgard raised a weak hand to her head...Bookmark here

She was naked, lying on a muddy ground covered in foliage. Morning dew dripped from the forest trees around her, giant things with elaborate trunks that reached in every direction.Bookmark here

It was truly magical.Bookmark here

Her skin was fair and very bright in color, making her stick out like a sore thumb among the greenery. Only her light-green hair matched the picture, dirt, twigs, and leaves gently sliding down the silky threads like raindrops on a leaf.Bookmark here

She could make the connection that she was alive and she knew what the different parts of her body were called. She knew this scenery, it seemed familiar and homely.Bookmark here

It was as if she lived her entire life among the trees, talking with the gentle rustling of her leaves in the wind... Leaves as green as her hair.Bookmark here

Edelgard separated her hand from her forehead, then ran it through a strand of her hair... then another.Bookmark here

But what standard did she base that on?Bookmark here

Sighing with conflicted abandon, Edelgard rose. She knew that no harm could befall her here, even with her frail body exposed to the world.Bookmark here

Her legs stumbled at first, and she fell back down.Bookmark here

The foliage softened the impact, and she tried again. It was as if she never learned how to walk, though her brain sent the right signals.Bookmark here

After several tries, she crawled to a nearby tree, pulling herself up. She didn't dare to separate from it, leaning against the bark.Bookmark here

A gentle warmth spread from her back, where the wood touched her flesh.Bookmark here

It communicated with Edelgard's body, then a branch crashed into the ground right next to her. She blinked, perplexed, crouching down.Bookmark here

The earlier uneasiness was gone, and she could control her body better than before.Bookmark here

The branch was straight, not even a single twig or leaf emerged from the smooth surface. It pointed away from the tree, deeper into the forest.Bookmark here

"Should I go that way?" she asked it, startled by her own voice. It was youthful and high, clean as a river. She received no answer. Glancing from the tree to the branch, she was shocked to see it gone. "Am I seeing things?"Bookmark here

Worried, and a bit nervous, she went her way.Bookmark here

Edelgard didn't feel the need to cover herself. Such things as indecency never crossed her mind.Bookmark here

Using each tree for support, she eventually heard voices in the distance. They were many, at least a few dozen people. They talked merrily, though retaining a grace and dignity Edelgard didn't find in her own voice.Bookmark here

As she got closer, the voices grew louder, but never entered her sight. She even walked past the center, stumbling back.Bookmark here

Edelgard stood on a small clearing below the coverage of the branches of the trees around her. They wore much more greenery, as well as bridges and huts that extended to the clearing...Bookmark here

"It's another red moon," a voice said. The floor of the hut hanging above the clearing was very thin. "When will the blue moon come back?"Bookmark here

"I like the green one far better," a second voice admitted between gulps.Bookmark here

"The most beautiful remains the white one," a third person suggested.Bookmark here

This one was a woman. She had the same clear kind of voice as Edelgard had, only with a more gracious aura about it.Bookmark here

Edelgard wondered if she could become like her, too.Bookmark here

She scanned the area for a way up.Bookmark here

"What did the elder say about the red moon?"Bookmark here

The voices trailed off as she went to examine the trees.Bookmark here

She had to be a monkey to scale them without help, and while she continued to wonder what a monkey even was, Edelgard had circled the clearing once, twice, a dozen times.Bookmark here

The only thing she found was other bridges leading away from her position, but having nothing better to do, she followed one of these paths.Bookmark here

The more she walked, the lower the bridges hung. Every few trees there were intersections, allowing for a couple to a dozen bridged to extend outwards. More than once, Edelgard lost her way, until the found a sharp stone on the ground and marked the paths she had already followed. Her body wasn't used to this.Bookmark here

As the people had talked about earlier, by now, the moon was showing.Bookmark here

Edelgard found it fascinating to think that colorful rocks were moving around in the sky. They had to be lighter than rocks to stay up there, hadn't they?Bookmark here

Even these wonders didn't divert from the shivers rocking her body, though.Bookmark here

Add to that the pain in her legs, and the cuts she had inflicted on herself with the stone, and Edelgard soon lost the strength to go on.Bookmark here

She decided it best to bury herself in wet foliage, which only added to her chill.Bookmark here

Trembling like a scared child, and hugging her trusty stone, she fell asleep next to a tree with an intersection.Bookmark here

As her body fell numb and darkness took over, her mind followed the bridges, wondering about where she could ascend to the top...Bookmark here 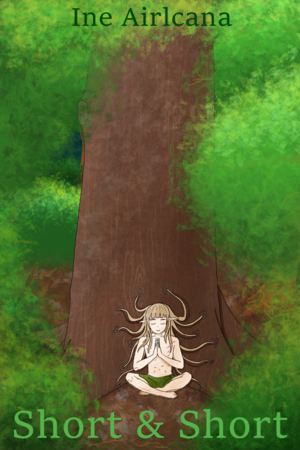