A Battlefield of Swords and Flowers

We lived in a town far into the frontier, a day's journey to the nearest city. So whenever the knights from the capital showed up every four months, it was cause enough for celebration. Nothing exciting ever happened way out here. And the only reason these renowned knights ever came to our village was to collect taxes on behalf of the Emperor; about a tenth of our village’s total wealth, and yet, we celebrated their arrival. They were heroes, after all. The best warriors the empire had to offer. They led our people through the bloody war we were currently fighting. So it came as no surprise that the moment their arrival was made aware to the town, everyone formed a crowd around them, but didn’t impede their advance. They merely watched on in awe, praising the very ground they walked on. Bookmark here

The two of them walked from the town’s southern gate and along the main road, most likely on their way to the chief’s office where they would collect taxes. Nevertheless, knights were the only ones in the world who could make a menial task like that look cool. Bookmark here

The knight on the right, in dark grey, full-body armor, was a tall, stout man who seemed strong enough to lift a house off its foundation, yet his muscles weren’t bulging out from under his skin. His head was topped with grizzly brown hair and his beard was just a bit darker. His jaw was chiseled like granite and his dark grey eyes were piercing like ice. His face was stern and seemingly full of wisdom, surprising for a man who only seemed to be thirty five years of age. The perfect specimen of a man, you could call him. Bookmark here

And the knight to his left, the knight closest to me from where I gazed on, stood a bit shorter in comparison. The knight was also dressed in a full set of armor, with this one being light blue in color. But there was one stark feature that set the armor apart—the gentle curve of the breastplate. That undoubtedly marked this knight as a woman. Bookmark here

She strode steadfastly through the street. Her pale skin seemed to be faintly glowing in the gifts that the spring sunshine brought her. Her streaming, light brown hair was tied back in a ponytail and flowed all the way down to her hips. The light blue color of her armor was shared with her eyes and her expression was sharp yet elegant and beautiful. Even in her armor and carrying the title of knight, she seemed as fragile as a prairie flower yet as sharp as the sword that hung at her side. Bookmark here

Unlike the sword of her companion knight—a thick longsword—she instead decided to adorn herself with a rapier. But unlike other rapiers commonly used by other knights, the blade of hers was a bit wider than most, seemingly allowing it to be used much like a longsword. The weapon seemed at home by her side in a way that made it seem like no other sword could be by her side.Bookmark here

But as they marched through the gazing crowd, I found it odd that unlike the male knight, who showed complete disinterest in his surroundings, she instead seemed like she wanted to leave as quickly as possible. She timidly turned away whenever any of the townspeople made eye contact with her. A knight being embarrassed by a crowd seemed basically like a fairytale that went against all my previous knowledge. You always hear tales of their amazing exploits and cunning battle sense. She almost seemed ashamed as if she knew something she didn’t want anyone else to know. But how was I supposed to guess at the inner workings of her mind. Bookmark here

Regardless, she kept her gaze mostly on the ground. Bookmark here

Even so, the crowd that celebrated their arrival didn’t seem to notice. The knights were the saviors of our empire. The generals in our wars. Peacekeepers of all the lands. They were seen as nothing but perfect. Bookmark here

“Sam! Sam!” Lia begged for my attention as she pulled on my shirt sleeve. “She’s so beautiful. Why couldn’t she have come sooner to show off her beauty.”Bookmark here

It like Lia had alluded to, this was the first time the female knight had traveled to our town. Her companion had always performed this duty for as long as I could remember with another knight,, but she was new to the village. That was probably one of the reasons why so many more people gathered around to greet them this time around. The knights were part of the military so there were many reasons why one could be replaced for another, and maybe that’s why the female knight looked so distraught. But again, no one seemed to notice. Bookmark here

You could say that every kid our age, eleven years and younger, revered the imperial knights and wished to become one of them in their future. I certainly held that sentiment, though, not as vehemently as other children. Bookmark here

Lia, who gazed on at my side, admired the knights with all her will. To her, they were the only people deserving of all her praises, save her parents, of course. Though unlike most children who would say it was their dream to become one of them, she thought differently. She instead wished to become a powerful mage, not the ones that gave support out on the battlefield. No. She instead wished to be able to save those who returned from the battlefield. To heal the wounded as best she could. Bookmark here

The way she saw it, the knights and soldiers of the empire risked their lives to head into battle in order to let us prosper and live a full life. To her, this was an almost unplayable debt. So she decided that the best way to pay it back was for her to save their lives. To give them a second chance at the same gift they fought so hard to present to her. Both the common soldier and the divine knights. Bookmark here

She had even taken steps to achieve this goal by being taught by the old, retired mage that lived at the church. Lady Alea used to be a combat medic in the past and had now retired to our secluded town. We only had one doctor in town, so she helped out whenever she could. And now that she was teaching Lia in her spare time, they would be able to attend to even more patients in the future. Though, Lia still had a long path ahead of her. Bookmark here

I had seen the knights multiple times, so my interest in them dwindled every time they came to visit. It wasn’t like they mingled with the crowds. They really only ever arrive, spend the night at the inn, and leave the next morning with the taxes they came to collect. Bookmark here

I had only wanted to get a glimpse of the new knight the people had been spreading rumors about, so when I was satisfied with my observation, I had planned to leave—it wasn’t like they would walk up to me and chat. As I said, I held them in high regard but I was already familiar with them—well as familiar as I could get by just observing them. But as I was about to turn to make my exit, Lia pulled me back by the hem of my shirt. Bookmark here

When I gazed back at the road, the knight walked by only a few feet before me. I could feel Lia at my side brighten up as she saw her heroes come so close to her. But her giddy tantrum didn’t pull my eyes away from what I saw. Bookmark here

I had only seen the female knight from a distance, so her fine details weren’t made clear. But now as she passed by, she seemed so much more beautiful than before. But it wasn’t due to her figure, nor was it from the finely crafted armor that she wore. It was something else. Something that couldn’t be seen by the eye nor be described in words. Bookmark here

By some coincidence, when I turned to glance at the female knight on final time before I left, she moved her eyes toward me. Bookmark here

Just for an instant, it was just me and her. Bookmark here

And in the next moment, the realization of the sudden eye contact made me feel embarrassed. Bookmark here

But for whatever reason, whether it was because she saw my embarrassment as funny or for some other reason, her features relaxed and she smiled. Then, as if the interaction hadn’t happened at all, she looked forward and kept walking, this time able to face the crowd without any anxiousness. Bookmark here

I was left speechless. Bookmark here

“D-did you see that?” Lia yipped as she pushed me back and forth by my shoulders in excitement. “S-she smiled at us! What could it mean, Sam?”Bookmark here

I thought she was overthinking it. But eventually I snapped out of my startled state and answered her. Bookmark here

“I don’t know. Maybe she was laughing at your future.” Bookmark here

“Hmm,” she tilted her head a bit confused. “What do you mean?”Bookmark here

“Maybe she’s laughing because she knows you're going to get into trouble for not doing your chores. She’s probably here to take you away to prison.”Bookmark here

“You’re always so mean about these things,” she complained as she repeatedly punched my chest with her small hands out of exasperation. Bookmark here

“So you’re not denying it, then?” I teased. Bookmark here

“W-well,” she stuttered as a ting of red formed on her cheeks. “Everyone rushed to the streets, even my parents, so it’s only fair that I should be given a little more time to do them.”Bookmark here

“It’s noon and your mom told you to do them this morning,” I pointed out, exasperated. Bookmark here

But she couldn’t finish her sentence. The bell tolled its one o’clock tune and the crowd slowly started to disperse as the knights reached their destination. Bookmark here

“Come on, I’ll help you out with your chores. I’m all done with mine.”Bookmark here 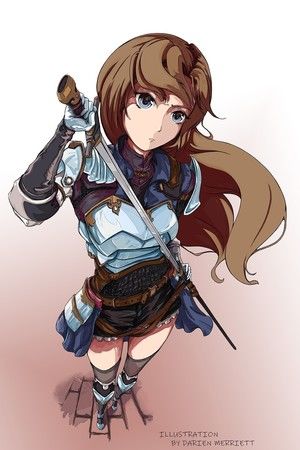 A Battlefield of Swords and Flowers