Swapping Bodies Is a Dangerous Game

“Logan, have you thought about what you're going to put on that career planner thing?” The tall kid with dishwater blonde hair chimed in as the group of three walked in stride.Bookmark here

“No, not yet Alex, what did you put down? I’m kind of curious to see what the eldest son and heir of the Moretti family restaurant does with his life. And what about you, Lars, aren’t you big into writing? You could be a great American novelist. Just remember when you two make it big in whatever you do, remember little old me.” Logan began sniffling and sobbing like a daytime soap opera actor.Bookmark here

“I put down that I’d be a journalist. I enjoy writing, but I also like the idea of making a difference. But you have no excuse Logan, you just need to write something down.” Lars chimed in between turning the pages of his newest read.Bookmark here

The second tallest teens blonde hair waved around in the cool autumn breeze. And through round spectacles his crystal blue eyes gazed at The Hound of the Baskervilles. His school uniform was ironed and free from blemish, and he carried himself with a suave intelligentsia look. Bookmark here

“I scribbled that I wanna be a chef. If you really have nothing, Loge just write down a chef like me and we can work on the project together. Lars here is gonna work with his girlfriend so it’ll just be us two bros.” Alex put his arm around Logan’s shoulder as they continued down the sidewalk.Bookmark here

The giant among the trio always had a dumb grin on his face. Alex’s dishwater blond hair was arranged in a spiky mess, probably the result of a rushed hair gel session before school. His emerald green eyes danced around from sight to sight, enlightening the group to his attention spanBookmark here

“Maybe I’ll write that I wanna be someone else cause my life sucks!” Logan’s head drooped as he combed his brown hair.Bookmark here

His eyes were a menacing shape, with dark rings around them from lack of sleep. The hazel color of his eyes had given him a piercing look, and his pale skin emitted a ghostly aura. But Logan’s biggest physical disadvantage was his height, at 5’6’’ he was three inches shorter than the national average.Bookmark here

“Heh, are you still mad about Sarah calling you short stack pfft?” Lars strained as his cheeks puffed up with laughter.Bookmark here

“No, and screw you Lars. You’re only 4 inches taller and yet you don’t get crap from the girls, and Alex don’t chime in on this matter! You make manlets like me feel self conscious.” Logan pulled ahead from the group to give them the middle finger.Bookmark here

“Hey guys, how about we stop at the diner I’m starving?” Alex spoke up through the growling of his stomach.Bookmark here

The three piled through the door of the local diner, a time capsule of the 50s. The waitress closest to the door rolled her eyes at the sight of the trio. These were her most annoying customers. It wasn’t rudeness that made them unbearable. It was their conversations and fights with each other that left an awful taste in her mouth. Though one perk of them coming here is that she would have gossip fodder to relay to the high school girls when they stopped by.Bookmark here

Logan plopped down in the corner booth seat in the back, “God I don’t know why I come here, Alex is the only one stuffing his face. The guy is a bottomless pit.” Bookmark here

Alex, busy huffing on the window and drawing with his finger, ignored the usually glum Logan. This had been the trio's dynamic since grade school. Alex was the bubbly chaotic good of the group, Lars was true neutral, and Logan was a chaotic mood swing away from turning to the dark side.Bookmark here

“What would the three fools like today? I hope for your sake you don’t annoy me, I’m definitely not in the mood.” The waitress sounded like a broken record.Bookmark here

“Oh, come on Lucy, don’t be that harsh you know you love us.” Alex turned to look at her with an innocent grin.Bookmark here

“I’ll take two cokes for me and that mopy one over there, and the big goofball will have his usual.” Lars orchestrated the orders as usual.Bookmark here

“Coming right up,… dorks.” Lucy tried faking her best customer service smile, but she slipped towards the end.Bookmark here

“Hey Lars, did you see Diane in biology today, dang that skirt was tight?” Alex gave an elbow to Lars sitting next to him.Bookmark here

“I-I only have eyes for my girl.” Lars gave a timid response, looking away towards the counter.Bookmark here

“Speaking of girls, Logan, when are you going to ask Savannah out?” Alex once again spoke, this time drumming a beat on the booth table.Bookmark here

“W-what are you talking about Moretti? We’re just friends and I’m p-pretty sure she doesn’t like me like that.” Logan slouched in his seat, his face a visible red.Bookmark here

“Dude she laughs at all of your jokes with that dumb giggle, you’re not even funny. She only hangs out with you. Whenever you aren’t there, she doesn’t say a single word to us. And my girl is convinced that Savannah has been asking for relationship advice, even though she only hangs out with one dude…. It’s you, she likes you!” Lars was meticulous with watching people's behavior around his friends.Bookmark here

“I’d believe it if I were only about six inches taller and had a ripped physique. She’s too cute for someone like me.” Logan slouched even further in his chair, letting out an audible sigh.Bookmark here

“Ok losers here’s your two cokes and Alex’s usual.” Lucy had returned from the kitchen with the trio's order.Bookmark here

Alex’s usual comprised of two double cheeseburgers clocking in at 1lb of beef. The burger also had tomato lettuce and onion with an abundance of condiments. And for good measure, each burger was also decorated with an egg. What was worse is that the drink Alex always got with such a colossal meal was a diet cola.Bookmark here

After sitting in awe as Alex devoured his meal, the three paid and left. Heading in separate directions, Logan made his way home. The autumn wind brushed up against his face and combed through his hair. The intensity of the waning sun made his hazel eyes strain. The view down the edge of his street filled him with nostalgia. The Davis family home, a modest old farmhouse that was remodeled by Logan’s dad. A shadowed silhouette cut through the white exterior, and a sickening feeling came over Logan.Bookmark here

“Hey pal, what are you doing on my porch, do you need anyth-?” Before Logan could finish his sentence, the silhouette pounced.Bookmark here

Tumbling on the wood porch, Logan felt a tingling sensation as the man wrapped his hands around his throat. The pulsating feeling hadn’t left Logan until he realized something strange.Bookmark here

“What happened!?” Logan was looking down at himself.Bookmark here

Releasing his grip and backing away from his own body, Logan started panicking. His body is lying on the floor unconscious while he’s in another body. Scrambling down to his own side, Logan checked for a pulse.Bookmark here

“Huh... oh, heh, I can’t believe you were that big of a loser. Did you really wanna switch bodies with someone?” Logan’s body sprung to life and began giggling.Bookmark here

“What did you do!?” Logan began feeling the unfamiliar features of his unfamiliar face.Bookmark here

“Here kid since I’m feeling generous I Will give you a quick rundown of what just happened. Don’t ask a single question and we’ll be fine. First, we switched bodies because of your desire to change. Second, your new body's name is Colton. Third, this body of yours has a girlfriend you live with so have fun. Fourth, you're a rich kid so you’ll be attending a private high school. And fifth, I’ll be contacting you soon about our little game. Please try to relax and treat this like a vacation.” Before Logan (now in Colton's body) could speak his body disappeared into his house locking the door behind him.Bookmark here

After pounding on the door and asking to be let in, the loud drones of police sirens filled the neighborhood. Before the sun had fully set Logan had found himself in the back of a police car. As the Ford Crown Victoria drifted from his white suburban home, a face peered through the bay window. It was his own, yet with an inhuman grin. Shivers poured down Logan’s spine with an icy jab. He had switched bodies with a total stranger.Bookmark here 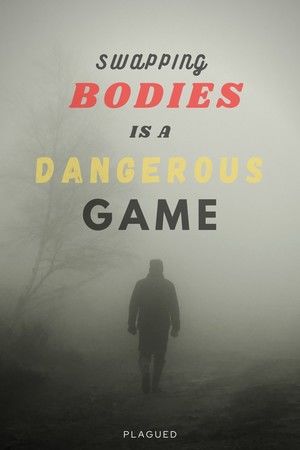 Swapping Bodies Is a Dangerous Game