How I was chosen and made into the favorite

The story of a small Eevee

My name is Charlotte, I’m an eevee, and this is the story of how I fell in love and became the favorite of my master

My family and me had always lived free in the forest, since very small I had been warned of how dangerous those humans, self proclaimed as Trainers, really were. They told me stories of how other pokemons had been trapped in small spheres, which humans called pokeballs; that is after having been cruelly attacked by other pokemons that those Trainers had under their control and that they used at their whim

Logically I grew up with fear of having any contact with those beings and following my parent’s example, hid any moment we perceived their aroma or heard any noise made by them when they clumsily wandered around the forest where we lived

I live peacefully, under my parents care during my most tender youth. But I soon grew enough to be allowed to go out on my own, only brief outings in search for food or to help my mommy. Back then I was rather young, barely having the equivalent of eight years in human terms, I was too young, to innocent, too naive

And too confident, my father was still teaching me the most basics of the abilities according to my species as an eevee. But I already felt so sure of myself, so capable of facing anyone who could dare challenge me, I didn’t know how weak and childish I really was

That was how I became more and more careless, more and more daring. Until the day previous to my ninth birthday, in human terms, when feeling I was a big girl, that is a big eevee, that naively I decided to venture towards the edge of the forest without telling my parents where I was going

When I got there I sat in the middle of a beautiful meadow filled with wild flowers and began gathering the most beautiful ones to decorate my bed in our burrow. I was so distracted doing it when, without my notice, one of those Trainers approached me so much that he was but a few steps away when I finally became aware of his presence

There was nowhere to run and hide, for that reason we avoided that beautiful meadow, I had no other option: I would have to fight

Even when that human appeared to be tall and strong, he didn’t seem to be a rival even for a small and childish eevee such as me. So confidently I bristled the hair on my back and tail, pretending to be a strong and tough little girl, that most have been amusing to him for he sketched a calm smile that made me loose all confidence

I observed how, with a casual movement, from a pokeball emerged a strong and magnificent specimen of Lucario. I naively thought that I might have an opportunity against him, but with just one strike he left me practically unconscious, lying on the grass, the battle had ended before I had even realized it, I had lost. Certainly now this human would proceed to enslave me, I would pass the rest of my life withstanding unimaginable tortures, how truly naive and childish I was

Too weak to even move, I felt him approached where I was, shaking with fear I felt his hand on my back, and shuddered. But it wasn’t with pain or fear, for his enormous hand was warm and gentle, he was caressing me tenderly

“you’re a beautiful eevee” he said while fondly stroking my head and scratching behind my ears, even when I was still exhausted I couldn’t avoid beginning to purr with happiness before those caresses

“And for what I can see, rather young” he said while opening my mouth to check my little teeth “I wonder just how young?” that young trainer asked himself, with one of his enormous strong hands he continued to scratch my head with the other one he began to caress my back

Unexpectedly and instinctively I lifted hips in response to that unexpected and very pleasant touch. Thus he continued for a moment longer until, almost without my notice, he grabbed my tail by the base and lifted me, leaving my hind quarters on the air. That took me, even more by surprise, I tried to break free but weak as I was and strong as he was it turned out to be impossible

Then he, using the hand with which he had been caressing my head began inspecting that intimate part of my body, that which my mommy had warned me never to let anyone touch. Weakly I struggled against him, but with a simple movement that strong human held me, as if hugging me, against himself and his arm, while with the hand he now had free continued with the exploration of my intimacy, spreading the folds of my soft and sensitive skin leaving me exposed before his eyes

“Well but you are very young, too much, practically a child” he said satisfied “good job Argento” he congratulated the Lucario that had defeated me and who calmly observed what his master was doing to me

Argento grunted pleased while I tried, uselessly, to bite that human, but my fangs were to small and the clothing that he was wearing to thick so he might feel my weak bites

“You’re perfect!” he exclaimed lowering me “you still have at least one years before your first fertile cycle” he said to himself

“Argento hold her” he requested and the powerful Lucario immediately obeyed, pressing me against the ground so I couldn’t move

“Please let me go!” I begged him while tears began to flow down my cheeks

“you should feel fortunate” he answered with firm and serious voice but without letting me go from his strong paws that kept me in place, with my face practically against the ground “my master and me have been searching for an eevee, as young and beautiful as you” he added with a smile

“I want to go home!” frightened I screamed when I heard that human moving behind me “I want to go with my mommy!”

“Stop moving so much, you will only make it worse for you” Argento said calmly “my master and I will be you’re new family and shall take care of you”

“NO!” screaming and crying I begged with all my strength, when again I felt the enormous hands of that human holding me firmly by my hips “I’m afraid!”

“Don’t worry, it’s not going to hurt… much” the Lucario said with a wide smile

“You can let her go Argento” his master ordered and he obeyed, I tried to escape but I was still exhausted and he had a firm grip on me “calm down precious” he softly whispered in my ear in a way that made me shudder

My heart was beating fiercely, while I screamed with all my strength, when I felt something caress the entrance of my intimacy: it was firm but soft and decisively pushed in an effort to get inside me

“NO!” I scream in fright without understanding what was happening while that hard and hot object continued its efforts to penetrate me “MOMMY!” I screamed again while my tears fell like rain on the soft grass at my feet

Suddenly, almost by surprise I was able to listen to the soft POP that was made when that hard object completely entered in me. I screamed with all my strength, because of the pain and fear I felt, I kept on screaming as that hard, hot and pulsating object continued advancing inside me, opening me from the inside

Until it finally stopped, he stopped, the pain stopped; he had touched something deep within me, it was like a soft but firm button, we could both feel it because I heard him softly moan when he moved my hips from side to side

In response I exclaimed a scream, but this time it wasn’t caused by pain but by the most exquisite of pleasures I had ever felt. Surprised by that magical change, from pain to pleasure, I widely opened my eyes; then that object began to recede, slowly going out of me

Again I moaned, but not from pain, now it was the opposite I wanted him to continue touching me, that he continued caressing me from inside, that he made me feel that incredible pleasure. Almost in answer to my soft moans he thrusted again, with such a strength that he made me spit while I expelled a very loud scream of the most intense pleasure, so intense that for an instant my vision blurred

Thus he continued, slowly going out of me, leaving me wanting more. And then with great strength, again he thrusted into me and I screamed with pleasure. I continued to cry and beg, but no longer from fear or pain, but filled with ecstasies and pleasure. I didn’t want that painful pleasure to ever end

Almost against my will my hips moved, at the rhythm of his thrusts, anxiously so that with every single one he would strike the very bottom of me, wishing he continued striking that button inside me because with every intense blow he gave me from inside I felt as if I was melting, dissolving between his hands. I knew in that instant that never, nobody but him, could make me feel so happy. I knew that I didn’t want anything else but to be his, always his. And to remain by his side I would let him do anything, that he might want to me, so that I could be always and only his

Like the prize a good girl gets for behaving well, suddenly and without any warning something exploded inside of me, it was humid and hot, I could feel how the force of that intense explosion pushed that hot liquid even further inside me, as if that button in reality was the entrance to the greatest treasure cave I could have

At the same time he exploded, I also exploded with one final scream of the most intense pleasure I practically collapsed, fainting, weak, strengthless, after having experienced the most intense ecstasy I was unable to move

“You shall grow to become a strong and beautiful Sylveon” he softly told me after giving me a deep kiss where our tongues played together during a moment “and I will give you all my love, everyday to make it so”

Lovingly I felt how he lifted me, around my neck he set a pretty collar that would mark me as his property; with half closed eyes I smiled tenderly at him while he placed a pokeball close to me

“I’m yours” softly I said while panting and then with my paw I touched the center of the sphere before me. The inside was a delicious darkness that invited me to rest and dream, to sleep in that safety he offered to me. I was completely his, he had caught me, I was his, he had made me his, and I would deliver myself to him as many times and in every way that could be necessary, so that we could be together for ever 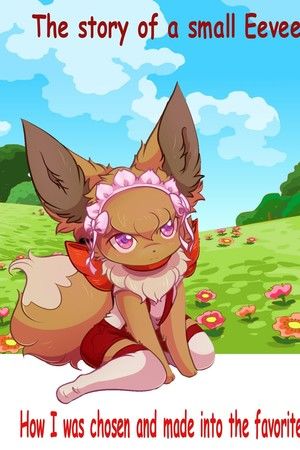 The story of a small Eevee