The tension between us had become frankly unbearable, every day since a month ago, with just looking at each other: at the time we had to go to school, during lunch break, in the library or where ever the problems began

At first it had just been rude comments and nicknames that had quickly escalated to more and more offensive insults. Then, to that we had added throwing at each other small objects during class: small pieces of paper soaked in saliva, chunks of eraser, until we got to the point of throwing pencils with rather long and sharp points that came very close to causing us severe injuries

Punishments and reprimands by the school authorities and our parents did nothing to stop the rising violence; on the contrary they only help to fuel the fire of hatred that burned between us

Intensity that lead us to brief physical confrontations like shoves, yanking at each others hair and other scuffles at any time and any moment whenever we met. This was rather frequent because we were both the same age and were in the same school group. Now that I think about it we are rather similar: our birthday is on the same day, with only some hour in difference on the date of our birth. She is only slightly taller than me; we both have long hair, only that hers is platinum blonde, while mine is auburn, slightly reddish

Ironically, the small differences between us almost seemed to complement us, we both liked the same type of music: Symphonic Metal, but she preferred playing the guitar while I preferred playing the bass. As if that wasn’t enough she preferred to draw and paint modern digital tools while I preferred traditional media and we both loved to write stories. To make matter worse in school we both liked the same subjects and got nearly identical grades

Many who didn’t know about out conflicts got to think we were sister, or at the very least best friends. Perhaps that could be so, except that in between us there was a very deep and terrible resentment, a hatred that nothing, absolutely nothing could ever heal it. Or at least that was what we thought

Like every day we came to school at practically the same time, a group of students was already waiting for us, from every grade, that waited, like who waits for a play to begin, the fight that every morning there would be between us

Because our audience cheered us on, because it had become a customary routine, but above all because we hated each other so much, that when we saw each other we continued to walk straight against the other, my green eyes fixed on her blue ones; as we got closer we increased the speed of our advance, as the tension surrounding us increased, as the yells and cheers from the other students, watching the show encouraging one or the other to defeat her opponent, increased

We continued our approach, almost running, until a couple meter away she threw her hard briefcase, as if it were a bowling ball, straight towards my legs with the evident purpose of tripping me. Another thing we had in common was that we both practiced martial arts, reason for which our fights had become more and more intense and interesting to our audience. Because of that, without slowing down my race, I was able to evade with a jump her attack, while with my own backpack, that was hanging from my shoulder, threw it at her from above

Both projectiles failed to hit their corresponding targets, but now free from their weight we were able to engage in an intense exchange of blows and kicks that, like in a dance, we executed while turning in a circular pattern, face to face, at the beat of the yells and applauses that rained over us

Face to face as we were, we changed the rhythm of our dance when, grappling, we tried to perform diverse take downs. Sometimes we were successful in throwing our opponent to the floor, but with the experience we both had, on this occasion it all just came to a forceful scuffle, where the similarities in strength and skills became evident

Perhaps we could’ve continued our fight but in that moment the yells of several teachers could be heard, whom running, hurried to get to where we were

“WHAT’S HAPPENING HERE!” one of them yelled

“EVERYBODY INTO THEIR CLASSROOMS!” yelled another one

“BOTH OF YOU!” yelled a third teacher running straight towards where we were “FIGHTING AGAIN?”

“NO!” we both said at the same time, knowing that one more report, that we had been fighting, again, would be justification for both of us to be expelled

“Jahana the klutz fell again and I was just helping her to get up” she said for we were both still firmly holding each other and now her beautiful silk blouse hang open, partially leaving her lace brassier and chest exposed, for during the fight I had managed to rip it, almost in half, when I had firmly grabbed the collar of it

While on my part I had my legs wide open, almost crouching, which had made my miniskirt to fully expose, below the black lace tights I was wearing, my delicate panties in matching color

“Aha, sure” the teacher said while watching us closely “who do you think you’re going to fool with that?” he asked angrily “QUICKLY TO YOUR CLASSROOM!” he shouted at us, for without evidence or witnesses to support any accusation he had no other option but to let us go, without any punishment, in this occasion

Limping I reached my classroom, for during that brief encounter Natasha had managed to sweep my support leg, I was barely able to avoid falling even when that kick had managed to hit me a bit above my ankle, yet it hadn’t been enough to knock me down

Now as I sat down, angrily I realized that during the fight not only did by beautiful black lace tights get ripped, just above the ankle, where a severe bruise marked the precise point of impact where her shoe has struck me, but also during the tussle she had pulled at the sleeve of the delicate cardigan that I was wearing with such strength that she had torn it, ruining it completely

The rest of the morning went rather normal to be a Monday in school; oddly there were scarce aggression between Natasha and myself during class. It was the calm before the storm. Or it was until after the lunch break when we almost had to return to our classroom

“What do you want now Natasha?” angrily I asked when she intercepted me in a corner, at the foot of the stairs; instinctively I had tightened my fists ready for the confrontation

“Only that you die Jahana!” she replied almost spitting in my face, even when she tried not to show it, both the mark of my shoe on her new skirt and her limp were clear evidence of the strong kick she received on her thigh

“¡Try it, if you dare!” I challenged her, with my guard up and ready for the fight I knew was about to begin

“Not here” she answered, when we both turned to see to teachers that already walked towards us “at the end of classes, in the forest”

We both knew the place, we all knew it well, for there were several beautiful meadows, a small lagoon and in the center a wide area dedicated to a playground. It was an ideal place for children to have fun, for couples to walk peacefully or late in the afternoons, when there was nobody there, an intense fight where none would interrupt us

“I’ll see you there” I said and we both went separate ways before anybody, even the teachers that were merely some meters away, could hear what we had just said

The minutes and the classes seemed to crawl, as if trying to avoid the fatal outcome to a conflict that had began with the start of the school cycle. But no one knew that hatred had begun even before, during vacation, when our parents had given us the worst news of our life’s, news that had ruined, our until then happy existence

Finally the bell rang announcing the end of one more school day. The end of bearing her presence, of having to bear the fury because she had torn my cloth. The time had come to get rid of her, I didn’t feel one bit guilty for wanting to hurt her so much, for I well knew that she wanted to do the same or worse to me 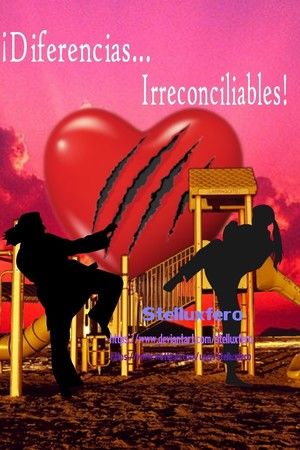