A Parent's Sacrifices Part 2
“You think this does not hurt me. I wanted you to return. But now, you are pregnant, and even if you weren't, you are engaged.” And not only that, but you also got pregnant even though I am and was still your husband! And now you want to return?! Please leave me and my daughter alone. I hope that you will be happy with your new boyfriend. Goodbye!
As I hung up, I could only think about how the situation had unexpectedly transformed into something that even I had not imagined it would turn out as it did. However, you walked out on us, so I have nothing to regret. I am glad I chose my daughter over some cheater like you. I want to be happy with my daughter and that means, my life should not be infiltrated by you.

As I walked out of the house, I headed for the car, but as I was about to leave, a woman approached me. She had beautiful, stunning eyes and her whole personality let off an upbeat and happy vibe. I asked her, ”Hello how may I help you?” She responded, “I just wanted to introduce myself. I am your new neighbor, Shirley “

I was stunned by her sudden appearance. I could barely talk. I told her, “ah, I see. Well it is definitely nice to meet you Miss--”

“What a coincidence! I work at the office buildings block away from there! Maybe after work we can go and grab a coffee!”
“I would love to. We can maybe go around like 1 pm?”

“Yeah that's fine with me.”
That was when my daughter appeared behind me and asked “hey dad,who is she?”

I responded “Sweetie, she is our new neighbor, and she has come to meet and greet us.”

Then my daughter ran up to her and said “Hello!! I am Gabriel.Nice to meet you!”

“Ah isn't she adorable?” she said. She leaned forward and said “ I am Lizeth. Nice to meet you too, Gabi.”
I told my daughter, “I’ll wait. You hurry and get your book bag, I am going to drive you too school, I excused myself and went to turn on the car,

Gabby ran to the car and buckled up and then arrived at her school. She got off and then I drove to work. When work was over I stopped by the grocery store and I saw my neighbor, she asked, is it time for that coffee we agreed upon?

I nodded in agreement and said well anyways let's go. As we had soon arrived at our destination I parked the car and told her not to be shy and that I would pay for everything, she thanked me and said, Oh my thank you very much, I appreciate your kind offer.

We sat down and started to talk, I asked her about her past, and what she liked to do, she responded to me and told me that she enjoyed art, and that in the past she had lost her husband due to another woman coming into their lives and stealing him away,

I then started to explain my past as well, about how my wife had walked out of me and my daughter and found herself a new boyfriend and fiancé.

She listened to what I said, and as we started to share our past and our problems I said, well maybe you should come over to the house to hang out.

She told me that it was a great idea and I drove us to the school so we could pick up Gabriel, and as Gabriel got on she said oh hi, and Shirley said hi sweetie! As I pulled into the driveway of my home, and stopped completely and Opened the door of Gabriel's door, and as soon as I opened it, she sprinted towards the door of the house. Right before I got off , I told her, hey maybe we could get a coffee some other day, and then went over to her door and opened it, she said, thanks for treating me to coffee, and I will think over your offer.

As I went inside my house I said, think it over huh, that's nice, but as soon as I had entered my humble abode there was something off ,it was too quiet, usually there would be a sound of Mackey Moose playing on the tv, or some tunes but everything was in complete silence.

I called out to my dear Gabriel, and she did not respond, as I frantically searched the house there was a note on the bed, it said, for you have not let me return, I have taken what is mine by right.

In the letter it said not to call the police and that if I did, there would be grave consequences, it said that they would soon be departing and that if I wanted to catch up to them then I better be quick on my feet, I grabbed my keys once more started up the automobile and then I pulled out of the driveway and started to go full throttle, if I were to delay any further I would not only lose my daughter but my will to live, for she was the reason for me getting up and keep going.

I had just called the police, I had thought it over a lot, I had thought that I would have a better chance at catching them if they were to be involved. I started to sway past cars almost collisioning at times, but by the grace of god or by just pure luck I never did, I kept going, there was no way I would stop going, my daughter which was now taken from me would have to pay, I need to get her back, th8s was all because I was irresponsible and had stayed to flirt with the new neighbor I would still have had her by my side. As I drifted around the corner I started to put some tunes, the one i had put was Deja **As I kept going I kept thinking that if this were not for her I would not be suffering because my ex wife had to come back and take my only light in this dark world.

As I approached the airport I got a call, it was my ex wife, she told me that she didn't want the daughter actually and she said she is near the entrance, I got angry. How could she leave my daughter alone near the entrance where there are a lot of people who have impure intentions?

As I hurried over to the front I saw my daughter, she was getting pulled by a stranger saying they would take her to see her daddy, as if they knew who I was, I hurried over and when she saw me she yelled,” DADDY!” As the man who was tugging at her saw me he turned and tried running, I grabbed his collar twisted irt and started walking over to the security and I told my daughter to follow me, I took the guy to security and told them what happened.

As they called the police I asked my daughter what had happened, she started ti tell me everything, about how mom had said that we would start a new family with her, and that right as soon as she was on the way over to the airport she got a phone call, one that for some reason she started to break down and cry and left her in the middle of the airport.

I started to go home and started to cry on the wheel , for I had almost lost everything dear to me once again, for I realized that I would do anything for her, all in the name of making parental sacrifices, for her education, for her life, for her future, and for her to live a fulfilling one, with many happy days, so that when I am gone she can have happy and memorable moments with me, filling the hole of not having a mother, with this I smiled, and then told Gabriel, thank you for being here with me, my dear little girl, through this journey which life is, Gabby looked up and asked what is for lunch today daddy? Is it pizza? As I looked at her through the rearview mirror, I responded, yes it is pizza, she exclaimed, “Yay pizza!” As we went back to the house, I thought, It is all for you, my dear daughter.
The End
Authors note: Thank You for reading this short collection of short stories, for this was a very fun thing to make, for it helped me try to share the meaning of growing up and life, though it may have been a short journey it was one which I poured a lot of my heart on, I broke down a lot into tears due to this being one of the ones I tried a lot on, even though I may be inexperienced in life, I want you guys to know, that even though life may be looking grim, there will always be a bright side, hidden or shown, you are not alone so whenever you need to get over a bad day, or a situation, please remember that there will always be people by your side, shown or not. If you ever need to reach out with anyone or simply need to help get rid of your worries, please do not falter for they will most likely understand and support you, no matter what- Workaholics IncBookmark here 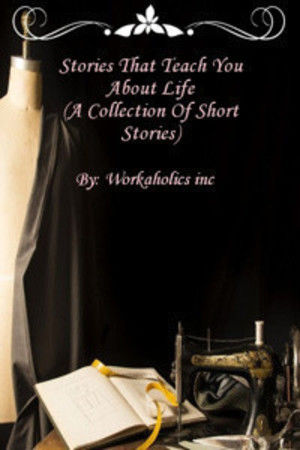