PROLOGUE: A RECOLLECTION FROM SEVERAL SEASONS AGO

***One time, in a manor in the middle of a wide, rolling grassland***

A middle-aged man with a calm expression on his face sat by a white, round, and ornate table, set upon the yard immediately in front of the manor. On his hand was a book, and his bespectacled eyes were pasted on its pages. From time to time, he would take a sip from his coffee cup, placed beside him on the table.

And then he set the book down. As if expecting someone, he removed his glasses, stood up, and turned his head towards the manor.

The full force of a speeding human hit his body like a bullet. The man almost fell, but he regained his composure and balance fast enough to catch the little girl, who tackled him with all her might.

“Ah! Eris, you don’t go attacking people around like that!” a dignified lady was following her closely behind, “What if you hurt your father?”

“Sorry…” the little girl, Eris, sheepishly apologized. Nevertheless, she never let go of the man, who was her father.

“Nah, it’s all fine, Hanna,” her father assured them, “I’m okay with this little chum running at m—guoh!” Blood then came out of him just as he was about to finish his sentence, prompting a fast response from the lady and causing Eris the shock of her life.

“See? I told you, Norman!” Lady Hanna was laughing at her daughter’s reaction, “You’re scaring Eris!”

“Hahahahaha!” Norman was quick to reassure the speechless Eris, “Don’t worry, Chummy! I’m all good! See? It’s all magic, the blood, and stuff.”

However, much to their own surprise, Eris’ face was contorted, ready to cry. Anytime now, she’d bawl her heart out.

The Duke then uttered a spell that caused electric sparks to come out of his wand. And then, after quickly saying a prayer, he pushed it on his skin.

Well, it’s not that good to be electrocuted for fun…

Eris was already laughing her heart out. With a potentially ‘major’ crisis averted, Lady Hanna silently praised her electrocuted husband, and he winked back at her.

And then lunch came.

“Eris, can you call your father here?”

The little girl sped past the several maids who were bringing in the lunch for the family into the dining table set outside the yard. This time, the Braunhauers decided to eat outside the manor, since the season’s weather was perfect for such an occasion.

“Dad! Mom is calling for you!”

“Ah yes…” Duke Norman Dyke Braunhauer was busy doing some work inside his private study, on the first level of his manor, “Just let Dad finish this, Chummy!”

Young Eris then went to the nearest chair and sat, watching intently as her father put some finishing touches on his fancy book arrangement.

“Oh…” Duke Norman then smirked, “Well, this is the model of the royal palace in Amaranth. I’m planning to show this to His Majesty the King once he visits us again.”

“Hoh…what made you say that?”

“Well, Dad always has books with him.”

“Haha!” the Duke patted her head, “You got that right, Duchess! You see, Dad loves to read books, especially the ones that Mom writes.”

“Oh…but aren’t you bored with those? They’re just words with no pictures!”

Duke Norman stared at his daughter, and then decided to take her to his lap, “Well, it is indeed kind of boring,” he admitted, “But well, you see, books are like soldiers—”

“Soldiers. Think of these as our guards,” he picked up a book and opened a page, “And inside, is a treasure they protect, which is called ‘Knowledge’.”

“Well, it is. Books guard knowledge, and they pass it on to the worthiest to read them.”

“You bet they do!” Duke Norman chuckled, “It’s the reason we’re like this right now, living in peace and prosperity. Her Holiness has learned from the mistakes of our ancestors and stopped all the wars because she reads books!”

“That’s right! That’s why we’re going to prepare for that!” then the Duke continued, “So first, Eris, be smart!”

“Haha! Don’t fret, Chummy! Remember, knowledge and wisdom are the only treasures that you can pass along, and yet, can never be taken away from you…”

“Well, of course! But, the food’s going to get cold the longer you talk about passing wisdom and knowledge, see?”

The Duke and Eris turned to see Lady Hanna standing at the door, watching them. Though she may sound strict, her face had a tender, loving expression, as she called her loved ones to the dining table. Duke Norman and Eris then winked at one another, and they followed Lady Hanna out of the room… 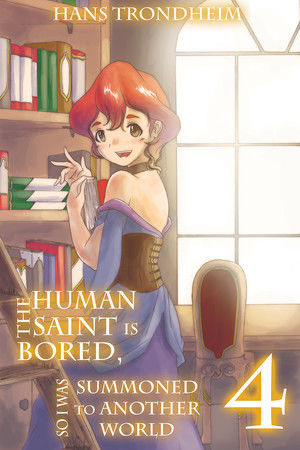