To Be a Princess (There Must First Be Pain)
Princesses don’t cry.

This is the one rule for royalty in Corde Femmes. Vervain has known since she was a child that her fate is to be kidnapped by the Demon Queen, like all princesses before her, and saved after a year of penance. It’s the only way to appease the goddess, Feuvert.

But when her summoned hero sneers at the task before her and refuses to follow tradition, Vervain fears that Feuvert’s wrath will destroy them all.

(Prompt: An RPG-style Princess x female Hero (No men can appear in this story at all))

The Heart is a Sea
Mermaids are beautiful – everyone knows that. But at what point does admiring them become something more?

Skye has been wrestling with that question for almost the whole thirteen years of her life. Now, cast out by her friends under suspicion of being “a lesbo”, it seems like the only question that matters.

When an enthusiastic mermaid princess offers her a deal that might bring her closer to the answer, Skye agrees without sparing a thought for the consequences.

"The Heart is a Sea" is a romantic comedy about compulsory heterosexuality and mer-human culture clash.

(Prompt: Two adolescent girls questioning their sexuality end up falling in love together)


Muirgen
On their sixth anniversary, an explosion stole their lives. Tristan was still reeling from the loss of his wife when he was reborn as Muirgen, the plain daughter of minor nobility.

In a flashy fantasy land that his brother would have drooled over, what was waiting for him was not a life of magic or easy glory, but exploitation at the hands of a father who legally owned him.

Just when he had lost all hope, an unexpected second chance arrives through a political marriage to the dark elf queen.

"Muirgen" is an atypical gender bender about grief, agency, and the art of learning to love again.

(Prompt: Male to Female gender bend through reincarnation into a fantasy world) 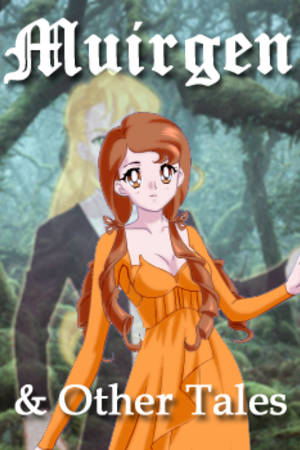