Raindrops drummed against the window as a girl quietly sat in the backseat of her parents’ car, listening to the sound of tires on wet asphalt. The car seemed to make a turn, before slowing to a stop. Her sleepy eyes fluttered open. Bookmark here

The house looked as Hyouka remembered it to be- large and with traditional inspired architecture, surrounded by lush greenery. It was two stories tall, with rustic, dark wood paneling and a grey shingled roof. Shoji doors laid along the front porch, shielded by an awning. A small pond decorated the yard, with a wooden bridge arching over it. The home was a serene sight, despite the rain. In a storm of cold water, it was a beacon of warmth. Bookmark here

“Only grab what you need right now, we’ll bring the rest in later.” Hyouka’s father said as he parked the car. He swung his bag over his shoulder, quickly opening his door and heading towards the house. Her mother reached into the backseat to retrieve her bag, before opening her door and stepping into the rain, following her husband. He rang the doorbell. Bookmark here

Hyouka reached for the bags next to her in the cabin, scooting out of the car, quickly moving to join her parents under the awning. Now though, the front door was open, heated air wafting out. Bookmark here

Hyouka’s grandmother moved to the side of the doorway, beckoning the family in with a kind smile. The petite girl was all too happy to oblige as she entered the genkan, setting down her luggage and slipping out of her shoes. She had only straightened up for a second when she was embraced by the elder woman.Bookmark here

“It’s so nice to see you again, darling Hyouka!” She pulled away, beaming down at her. She was dressed in a burgundy yukata, small round spectacles perched on the bridge of her nose. Her long white hair was pinned back into a bun, and she had the same soft ruby eyes as her granddaughter. Bookmark here

“Why, have you grown any taller?” Bookmark here

“Not a single millimeter.” Bookmark here

“Mother!” Hyouka’s father greeted as he kicked off his shoes, bearhugging the woman. Bookmark here

“Keisuke! Be gentler, or you’ll break her!” His wife scolded. Bookmark here

“Now now, I’m not a fragile old lady, Mizuki.” Grandmother chuckled, patting her son’s arms. ”Let’s get you all situated for the time being. Where are the rest of your belongings?” Bookmark here

“In the car. We’ll bring them in when the rain lightens up.” Bookmark here

“Ah, I see.” She mused. “Well, I’ll show you to your bedroom then, dear Hyouka. You can unpack while dinner is prepared.” Bookmark here

“Yes, thank you.” Hyouka reached down to pick her luggage up again. She followed her grandmother upstairs, straining under the weight of her bags, but managing to steady herself and reach the second floor. Bookmark here

“Here we are. If you need anything at all, don’t hesitate to ask!” Bookmark here

Grandmother opened the door, revealing the bedroom Hyouka always stayed in when she visited. It was rather simple, powder blue curtains covering the window and a matching duvet on the queen-sized bed. A soft rug laid on the floor, and the cream-colored furniture was freshly dusted. A folded outfit sat atop her dresser- her new school uniform. It consisted of a white collared blouse, pleated black skirt, red ribbon tie, and a dark grey cardigan. Bookmark here

Hyouka was quick to put down her luggage, softly sighing in relief. Grandmother smiled, clasping her hands together. Bookmark here

“Very well! Your parents and I will work on dinner in the time being, so make yourself comfortable!” With a polite bow exchanged between the two, Grandmother left the room, closing the door. Her descending footsteps were audible, before soon coming to an end. Bookmark here

Hyouka glanced at her reflection in the mirror, striking red eyes staring back at her. She was pale, with rosy cheeks and lips. Her long hair fell to her waist, but unlike her dark-haired parents, hers was startlingly white. Her build was noticeably small, both in height and weight. One might describe her as doll-like; a beautiful, yet odd-looking albino doll. When her grandfather was still alive, he remarked that she was the spitting image of her grandmother back in the day. Even now, they had the same crimson eyes.Bookmark here

She glanced back at her luggage on the floor, reaching for her phone. However, it wasn’t there. Staring at the bags, it dawned on her that she must’ve left it in the car while trying to exit. Bookmark here

Sighing softly, she decided to see if she had maybe- by some miracle- just left it in the genkan. Hyouka opened her door again, quietly walking downstairs. The voices of her parents rung out from the kitchen. Bookmark here

“Hopefully, Hyouka-chan won’t have any trouble at her new school.” Her mother said softly. Bookmark here

The girl froze at the sound of her name, now listening intently. Bookmark here

“Do you really think we’ll have to worry about that?” Her father countered. ”Everything's been fine since junior high ended! It’s the middle of 11th grade now!” Bookmark here

“Keisuke, we’re in Nagoya! A completely new city! Not only is she a transfer student, but she looks strange too!” Bookmark here

“But she’s very cute and polite. Everyone will adore her!”Bookmark here

“Do you remember the incident?” Her mother’s tone suddenly darkened, a coldness lacing her words. The house went tensely silent. Hyouka held her breath, her shoulders rigid. Bookmark here

“Please, let’s not imagine the worst-case scenario, Mizuki.” Grandmother’s calm voice shattered the strained atmosphere. “Have faith that the next few months will be just fine.” Bookmark here

The woman let out a tired sigh but didn’t argue. Bookmark here

Not wanting to be reminded of her past anymore, Hyouka silently crept back upstairs, shutting the door with a soft click.Bookmark here

Hyouka stood at the front of the classroom, her head held high and her face expressionless. Unfamiliar, curious eyes bore into her, studying the girl’s striking appearance. Murmuring filled the air. Bookmark here

“Is her hair dyed? No way that’s her natural color.” Bookmark here

“She must be wearing contacts too. Her eyes are bright red.” Bookmark here

Hyouka coldly looked at the offending male classmate, an iciness practically sharp enough to penetrate his soul. She swore she saw him shudder before he looked away. Bookmark here

The teacher, Nikaido, didn’t seem to pay attention to this hushed gossiping, too busy trying to organize the papers in his hands before he could formally introduce the newcomer. Bookmark here

“She’s so tiny, just like a porcelain doll!” Bookmark here

“Yeah, she’s actually pretty cute when you look at her again.” Bookmark here

“As you noticed, we have a new student joining class 2-3!” He gestured to Hyouka, who stood there calmly, turning to write her name on the board. Bookmark here

“I’m Hyouka Morikawa. Pleased to meet you. I hope we can get along.” Bookmark here

A black-haired boy, who had presumably been sleeping at a desk next to a window, suddenly sat up straight. He was tense as he looked around, his gaze locking on her. Hyouka’s stoic expression faltered momentarily, but she quickly regained her composure. The boy, however, continued to gawk at her. His eyes were dreadfully familiar- angular with light sanpaku irises. They were piercing and light brown, almost gold, like that of a fox. Bookmark here

“Tanihara-kun, would you not be so rude and stare at Morikawa-san?” Nikaido called out. Bookmark here

“Sorry...” He muttered, leaning his chin on his hand and turning his gaze toward the window. Bookmark here

“Apologies, Morikawa-san.” The teacher offered an earnest smile. ”Ah, your desk...” He paused momentarily, scanning the room, before pointing to the only vacant seat. It was in the second row from the window aisle and one ahead of Tanihara's. ”There."Bookmark here

“Thank you, sir.” Hyouka said quietly, bowing before approaching her new desk. The boy was still staring pointedly out the window, as if stubbornly refusing to look at her again. Bookmark here

That was fine with her. Bookmark here

She sat down in her chair, poised and refined, crimson eyes facing forward. However, her heart thudded in her chest almost painfully. She couldn’t believe this. She was absolutely certain of that boy’s identity. Bookmark here

What were the odds that she’d transfer into the class of one of her old tormentors? Bookmark here 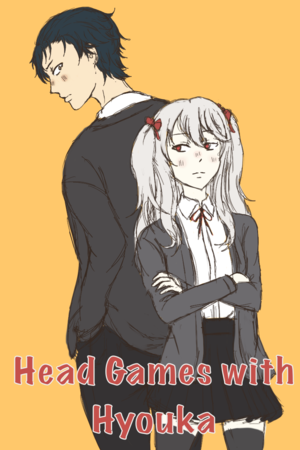