PROLOGUE: THE 'INVESTIGATION' OF LADY ERIS, DUCHESS OF BRAUNHAUER

“I’m Eris, the Duchess of Braunhauer. My father’s daughter and heir,” Eris told me, all the while she never shed an ounce of her dignity as a noble, “Why are you asking me that, Mister Kuro?”

“Well, it’s just that, the way you talk now was so different, it felt like I was talking to a different person,” I admitted. Contrary to how the Marquise of Monfort did it, my ‘investigation’ was direct and simple: I’d try to appeal to the subject’s sympathy or relationships, and then proceed from there. There’s no need for dark rooms, nor swinging lights. Only a table, a pair of chairs, one plate of cookies, and tea would suffice.

“Don’t worry about me, Mister Kuro. I’m still myself,” Eris answered as she crossed her legs while sitting comfortably on the chair. She followed that with a sip of tea and a bite of cookies, “However, the Eris that you got to know first was the ‘other’ me. Are you disappointed that I’m not that naïve as you think I am?”

Honestly, I was surprised by the sudden change in her character. But as for thinking that she was naïve, I don’t think so. Sure enough, I used to see her in that way before; however, after she displayed her understanding of the crisis in Amaranth, my opinion of her changed drastically.

Anyway, this is not the time to admire the Lady Braunhauer. There are things I need to understand.

“Regardless of my opinion of you, Lady Braunhauer, please tell me, why did you do that? Betraying Her Holiness suddenly.”

“Oh, that…” the dignity in Eris’ eyes turned into bitter sadness, “I guess I have to account for my actions, after all.”

I remained silent as she prepared herself to speak about her motives. Suddenly promoted into the captaincy of the Paladin Corps with the Marquise’s death, I possessed the authority to conduct investigations if it was about the safety of the Saint, to whom we were duty-bound to protect as her guards.

Of course, I will not miss asking Eris about her reasons for doing what she had done. She and Maddie are my friends, after all. And the last thing I wanted is for them to turn against each other’s throats.

“Mister Kuro…do you know how the Braunhauers came to amass their massive wealth?” she asked.

“My apologies, Lady Braunhauer. You know that I’m a stranger from a faraway country, so I wouldn’t have any knowledge about the nobility here.”

“Alright, sorry. Let me tell you then. The House of Braunhauer had prided itself for having the greatest companies of mercenaries in all of Amaranth, a kingdom which also became rich through the waging of wars.”

“That’s the fact that I’m aware of; Amaranth was built from the blood of mercenaries that eventually founded a kingdom.”

“Yes. And, if you’d look well into our history, Mister Kuro, Chersea, was never really at peace. After the last Human-Demon conflict, the human realm witnessed wars against alliances, individual kingdoms, groups of people, and even betrayals.”

“Indeed. Here, there were only a few seasons that came to pass peacefully. And, as a kingdom of mercenaries, we Amaranthines thrived from the conflict to become the richest kingdom in all North Chersea, if not comparable to the Empire’s coffers.”

“And, your house was at the forefront of this business, Lady Braunhauer?”

Eris smiled, “You sure are quick to pick up, Mister Kuro. My father became famous for leading his own mercenary band in checking the army of the Iron Princess several times, during Nerfes’ invasion of our land in the last war. Even the current king of Amaranth was under his command back then, you know.”

“But that all changed when Lady Madelaine, Duchess of Rubinforth, became the Saint. She endeavored to stop the conflicts being fought across the human realm and brought the troublesome men into agreeing with her vision. That includes underhanded ways to force them to say ‘yes’.”

“Her Holiness Lady Madelaine started a coup-de-etat that overthrew the former royal house of Amaranth, the Benicci, and installed a more ‘friendly’ royal house, the von Albert.”

“I…I don’t know about that.” Honestly, I was shocked to hear that story. The picture of Madelaine Ann Rubinforth in my head was that of a teenage girl going through her adolescent years and struggles. Never in my mind had I thought of Maddie as a shrewd politician.

“Looks like you’re the one being surprised, Mister Kuro,” Eris had a smug look on her face, “I’ll tell you what, the people around you don’t look like what they seem. So, you best be careful in dealing with us.”

I could find no words to say to her.

“Well, with the downfall of the Princely House of Benicci, the last obstacle to Lady Madelaine’s vision of a peaceful Chersea came into a reality, but at the cost of our livelihood. You see, Mister Kuro, with the promulgation of the ‘Saint’s Peace’, a lot of our mercenaries lost their jobs in the end.”

“But, can’t they find any other work?”

“You know the answer to that. Mister Ricardo was one of the lucky few to manage a successful restaurant business after the Saint’s Peace. But a lot of my house’s men met their demise, not on the battlefield, but begging on the streets, dying of hunger or driven from their families, thinking they were violent and insane. There’s a mercenary saying: once your arm has learned to kill, it would only do so until it had its fill.”

“So, they weren’t able to adapt to a normal society…”

Eris nodded, “And a lot of those men were like father, and brother-figures to me. And to think that they died the most pathetic death…” I noticed her hands were clenched, “Unforgivable! And it’s not only our house who lost their main source of living because of the Saint’s Peace. There were a lot of others too, in Amaranth!”

Damn…while it’s true that peace was a force of good, it’s something that would also have negative consequences for the people whose only knowledge was to kill and destroy. Not that we shouldn’t endeavor to eliminate conflicts, but, at least we should also plan for those whose living comes from killing. It’s not that they really wanted to do that, but because of the circumstances, they were forced to become like that.

And they suffered for it, physically and mentally.

“How could I not take vengeance for those people who are important to me?” Eris put up that question, “So, I asked the Saint of the Flame for help in this matter, and she obliged.”

“I know little, but she’s happy that ‘we’re of the same goals’,” she explained, “It was Her Holiness, Lady Seirna who gave me that book talisman that would keep my thoughts hidden from Lady Madelaine’s ability to read minds. She also tried to have the Human Saint kidnapped by the mercenaries hired by the Empire back when you’re on the way to Fen. And Lady Seirna was also interested in Lady Lilyhaven, instructing me to lead her to Calabria back when she fought with Lady Maddie.”

“The same goals of removing Her Holiness, huh?” I pondered on that as I realized the extent to how this saint, Seirna, influenced our actions in the past. She was aiming to hinder Maddie, and if I think about it, it’s a good thing that Eris turned against her to side with us.

However, I couldn’t be sure. I wanted answers from Eris, “Lady Braunhauer, one final question please. What made you lose your support for Lady Seirna?”

Eris was taken aback by the question I raised. She answered it, regardless.

“Though Lady Seirna and I may have the same beliefs, spending time with you people presented me another perspective on this. I saw your sincerity, your determination, and your reasons you keep propping up Lady Madelaine’s goals. No matter how angry I am for what happened to my father’s men, I couldn’t ignore the fact that though they died, a lot of other people were saved and being saved…”

I stared at Eris’ eyes, trying to find out if she’s telling a lie. However, as I don’t possess the ability to read minds, I could only guess. And from her words and actions, I could say that she’s sincere with her statement.

“B-Besides, my…father and mothers were now dead because of my folly,” tears were falling from her face as she spoke, “I, because of my blind desire to avenge our men, lost sight of what’s more important…my family. How could I not turn away from that?”

I couldn’t say anything. Eris’ voice was filled with conviction. Even a child could see that she was regretting her decision to side with that Seirna.

“Mister Kuro…” Eris stood up, and kneeled before me, “I’d like to fight under Lady Madelaine’s—no, under Her Holiness the Saint of Chersea’s—banner! Please consider this as an atonement for my sins. And if it’s not enough, I’m willing to give my life for Her Holiness’ cause. Will you guys give me another chance?” 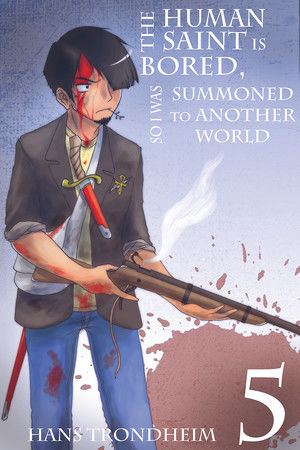