As the sun rose, it’s magnificent colors took over the sky, painting it anew. The beautiful heavens above are tinted with gold and orange rays emanating from the giant star. Birds chirped, waves clashed with the sand, and most importantly, mankind woke. Children frantically rose from their beds, putting on their outfits and going outside to play with their friends, while the prideful adults stressfully ate their breakfast as they got ready for work. From under the blankets, a hand rose, powerful, and dangerous. It grasped the beeping alarm and crushed it. The beeping came to a halt, yet the evil aura coming off from that man, or thing; However you’d like to call it, didn’t. His head appeared above the covers. Matte black hair, with crimson red eyes that within could be seen the essence of pure evil. He had gotten out of bed, nothing on except for a pair of short, and black trousers. His body was shocking, it wasn’t massive and bulky, yet it was perfectly toned and defined, with muscles even the mightiest couldn’t possibly achieve. “I can’t wait for today's fight with that big man, I know I can beat him, after all nothing could stop me.” His sentence was followed by an evil cackle, maniacal and disturbing. This demon-like man was named Akuma, hence his personality and aura… He’s a simple man, yet very complex at the same time, most people would think he’s an evil shell, nothing inside, empty. However no one could truly understand his true nature, his ideology of chaos and havoc. Akuma put on a pair of flip flops, sliding his feet into them, and marched outside. The event that followed was shocking, to reach his destination, the fighting arena, he sprinted, not as hard as he could. Although he did pour a fair amount of energy in doing so, in a matter of two seconds, he had crossed 165 kilometres. It was a horrible sight, what is referred to as an abandoned building, graffiti on the walls and urine all over the place. Akuma busted down the door with a swift kick then proceeded to open his mouth- “Heya motherfuckers, guess who’s here?” A behemoth of a man approached him, around eight feet, he was bulky and fat as well. “Akuma! My boy, I’m John Stab, we have a match today so let’s get on with it!”- The place was filthy and rotten, but it was crowded. Insanely packed, the roars began as both men stepped foot in the arena, Akuma knew a single strike would be enough to not only incapacitate this man, but to end his life, so he decided to play around knowing that his speeds exceeded even that of light by a great amount. The bell rang, cheap and plastic, yet efficient. The large man approached Akuma, but it was time for some fun. Akuma circled the man at speeds the crowd couldn’t even comprehend let alone see! He would poke his toxicity at the man, flicking him with a small amount of power; Even though this sent the man flying to the edges of the ring. “YOU BASTARD!”- The man radically threw a barrage of punches, slow but powerful, although not close to Akuma’s strength and technique, he was a master of martial arts, he could easily learn a technique that would take more than a century to learn in a matter of seconds, but he decided to save his skill for ones that are worthy. Finally, he decided to end the fight, flicking the brown haired man on his forehead, resulting in him falling to the ground, knocked out. An uneasy presence could be felt in the crowd, it disturbed the others. A man in a black cloak, covered to his head, his eyes were set on Akuma, though Akuma didn’t feel the murderous aura. 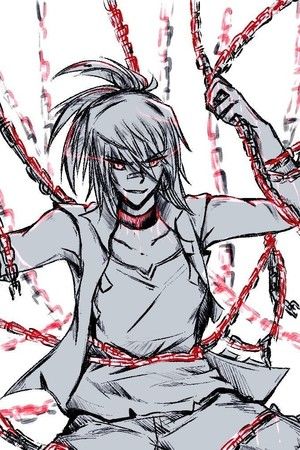