The Beastman Saint is H*rny, so I was Kidnapped to Another World Vol. 6

At the beginning of the ages, the land was empty and barren. The winds scatter the dust from the west to east, north to south, and the gray heavens look upon its shores. The almighty Gaius, gazing at the dreadful grayness, called upon his wife Arame, and together they created the white light of the sky.Bookmark here

The ages had begun.Bookmark here

Gaius lay with his wife Arame, and she bore him twins, Enver and Noctir. Enver was a great hunter, and from him, the trees came forth and covered the vast land. Noctir was gifted with wisdom, and from her sprang the skills of magic. They were the first-born; the forebears of the elves.Bookmark here

Then Gaius slept with his wife once again, thus, the ever-persevering Yuvis was born. He was a child of the earth, a skilled worker of the land’s riches. From him, mountains, hills, valleys, and plains were formed. His children were henceforth called the dwarves.Bookmark here

In their desire to sire a child that was perfect, Gaius laid with Arame yet another time, and she bore the powerful Tehmon from this union. Tehmon possessed a strength that could level mountains and raise the seas, yet she remained a gentle soul. She loved the earth, and from it came the creatures that walked the land. When Tehmon took for herself a husband, their descendants were the firstborn of the Beastmen.Bookmark here

Gaius’ desire for the perfect child never left him. He wanted a babe that could gain the wisdom of the heavens and possessed the strength equal to the gods. While his children Noctir and Tehmon have those qualities, he dreamt of a child that has both. So, he slept with his wife once again.Bookmark here

But Arame’s sister, Vanya, disguised herself and bore Gaius a son, Hanno. Hanno grew up to be both powerful and wise, but he dared to raise his hands against the gods, first against his siblings and then his father. In the end, he was defeated and was cast out.Bookmark here

And Gaius saw that his desire was foolish. He lay with Arame for the final time, and from their union, a daughter was born, Ava. Ava was beautiful like her mother, and they loved her more than the others that came before her. Gaius gave her the blessings of charm, and her children the ability to multiply quickly and fill the land with their offspring.Bookmark here

Then Gaius and Arame saw that everything they made was good. To the elves, they gifted wisdom. To the dwarves, the health of the gods. To the Beastmen, the strength that could equal the heavens.Bookmark here

And to the humans, everything of their blessings, for Gaius and Arame loved Ava’s children. But Hanno, wishing to spite his sister Ava, put a curse on her descendants that they could only use their blessings if they were together.Bookmark here

Because of this, Gaius avenged Ava by giving a curse to Hanno’s children. For generations, his children, the demons, looked at the humans with great envy as they gnash their teeth and beat their heads because of Gaius’ curse. They plotted their revenge.Bookmark here

The demons then sought to divide Gaius’ descendants, and they succeeded. A great dispute arose between the elves, Beastmen, dwarves, and men. Cities burned, land dyed red with blood, and rivers carried corpses to destinations unknown. Arame wept at the widespread death and destruction, and Gaius was furious, all the while Hanno’s children watched.Bookmark here

Angered by strife, Arame left for the heavens, and Gaius punished the elves, Beastmen, dwarves, and men by breaking the land into four realms. They were to rule a part of the land he made for them. And to stop the demons from causing further transgressions, Gaius threw them into dry, dead land.Bookmark here

So ends the first sin, ‘The Great Sundering of the Land’.Bookmark here

However, the children of Hanno never gave God’s children respite. For they once again gathered their armies to make war against Ava’s descendants. This time, the elves lent precious aid, the dwarves made weapons of war, and the Beastmen fought side by side with men. Kingdoms fell, heroes arose and died, and blood flowed before the tide of the demons was turned back.Bookmark here

The children of Ava never forgot their gratitude to the loyalty of the Beastmen, thus, this was the beginning of their wonderful relationship.Bookmark here

-from the ‘Book of the Lord Gaius’Bookmark here

I’d say this was the first time I’ve read about the creation story of this world.Bookmark here

Though Maddie’s library was big enough to house thousands of books—some with hundreds of volumes—I’m pretty curious why I had read nothing like this book when I was there. And to think, I read all the books in there (the only ones I skipped are the census books and similar statistical ones; I find them boring).Bookmark here

Well, it must be because Maddie’s not that keen follower of their god, Gaius.Bookmark here

Ah, in any case, while I do find some books here that’s interesting, I should prioritize my escape attempt. After all, though I survived several conspiracies against me—which included an assassin’s blade to my neck, leading the armies against a deranged saint and her undead hordes, dealing with Lily’s curse, Eris’ betrayal, and Maddie’s whims, there’s no way I’d intend for myself to get stuck and die in this lonely place.Bookmark here

On the other hand, I think I should bring this book with me too…I put it inside my sweater and did some fixes on my clothes so that the book would be secured as I go.Bookmark here

For my escape, I made a makeshift rope out of the bedsheets and blankets of this…uh…place. I said that because, while the room I’m in was quite spacey, I couldn’t help but compare it to a cave. The interior was like it was carved into a rock—and sprinkled with some civility, as evidenced by those weird carvings on the walls. The way out of my room was barred by a heavy wooden door that was also crudely made. But hey, though it’s like that, it’s difficult to open. That’s why I was still here even though so many days had passed.Bookmark here

Anyway, for my everyday needs, there was a smaller room inside this place that functions as a comfort room. There was also a tub here that was mysteriously being filled with water, as well as a table full of various delicious foodstuffs and drinks being replenished after a long sleep.Bookmark here

For my entertainment, a huge cabinet of books was available. And the one who was maintaining this place sure knows my preferences, for it was a variety of history and literature books that filled the shelves.Bookmark here

I’d say I was being well-taken care of in this…uh…prison. The only thing that is missing is someone I can talk to. But it’s not like I’m desperate for someone to accompany me. I would like to come outside this place, for I could tell that it was a pretty interesting world out there.Bookmark here

Oh right, my escape. I tied the makeshift rope on a sturdy foot of the bed near the window and gave it a few pulls to make sure it’s secure. Once I’m satisfied with it, I opened the window (which had no grills) and looked outside.Bookmark here

The winds were strong, but I think it’s tolerable when I begin my way down. After all, the height of the room where I’m in was around three to four stories up (I think). And I guess I could pull this off since when I came here, I have seen no one around guarding the area.Bookmark here

I let go of the bunch of the makeshift rope and watched as it fell on the ground. There were still a few meters of it that were left lying on the ground, even as the wind was blowing it sideways. My heart was beating fast; I don’t know if I should risk it or not…Bookmark here

And really, I won’t even experience this if not for Her Fluffy Holiness and that Beastman girl, Kashca. Why did she even attack us? What happened to Ruro when I saw her in Arles? And where the heck is this place?Bookmark here

Those questions filled my mind as I ponder whether I would proceed in my escape. You know, that part when you’re about to do something you’ve been thinking about for long, and you’re having doubts at the last minute? I may be the new hero that saved Chersea from the Imperial legions and hordes of undead before; even so, it’s kind of scary when I’m confronted by that building altitudes. I’m kind of afraid of heights, see?Bookmark here

Oh well…it’s not like I have any other choice. Alright, here comes nothing!Bookmark here

At that moment, my heart almost skipped a beat when I heard the familiar voice of my ‘slave’, no other than the Beastman Saint, Ruro of the Wolf herself. She came into the room with a bunch of foodstuffs in her arms, apparently to replenish my supply. I had no time to hide my escape paraphernalia; I just let go of the makeshift rope and faced her.Bookmark here 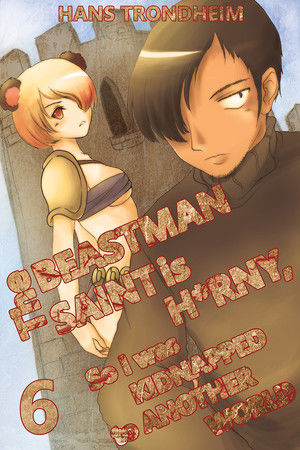 The Beastman Saint is H*rny, so I was Kidnapped to Another World Vol. 6