After that day, Hyouka didn’t find herself running into unfavorable high school boys anymore. Though she was reluctant to accept the idea, perhaps she really was glad to have Yuji at her side. He could be quite intimidating to an outsider- after all, he was just as much of a troublemaking delinquent as he appeared.

While exiting the classroom together, his friends Ueno and Moriyama came from the opposite direction. Hyouka’s bag was suddenly thrust into her hands as Yuji charged at the boys. She was a bit caught off guard by this, but merely watched.

“Hey, what- ouch!” He was cut off by Yuji’s chest barreling into him, falling flat on his backside. “What gives, Tanihara?!”

“Why did you post that video, you bastard?! Everyone saw it!”

“What're you yappin’ about?” Ueno looked down at his two friends, easily pulling Moriyama up by the back of his sweater and setting him back on his feet.

“He filmed me and those assholes from the other day!” Yuji made a sour expression. “The last thing I need is to have something the school could suspend me over again!”

“C’mon, you gotta admit that it was kinda cool!” Moriyama protested. ”But no one even threw a punch! How can you get in trouble for that?!”

“I’m telling you, they have it out for me! Just take it down already, jeez!”

Rolling her eyes and shouldering her bag, Hyouka stepped toward the trio.

She didn’t like that this video was still online either- it was a reminder of how frightening that whole ordeal was. She could still remember the feeling of that boy’s fist curled around her hair, with the sharp stinging at her scalp. She could feel his hot breath on her face as he leveled himself with her, eyes burning into hers.

But she wouldn’t let on just how vulnerable she felt in that moment.

“You.” She gave Moriyama a sharp look. “I also want you to take down that video.”

“Huh? Why should I?” He squinted down at her.

“I don’t like having videos of myself online, seeing as I never gave you permission to post it. It’s also quite disconcerting to see myself near those pathetic lowlifes again.” She replied coldly, arms crossed over her chest.

“Yeah, you heard her!” Yuji chimed in, grabbing her shoulder. ”We both want it gone!”

Hyouka looked back at him, taking note of the way his brows furrowed.

“Ugh, fine.” He reluctantly pulled out his phone to delete the post. ”It was getting so many likes too...”

“I don’t care! Just get rid of it!” Yuji insisted.

“Thank you.” Hyouka truthfully did feel more at ease now. However, she knew a fair amount of people had seen it, which still bothered her. She despised how weak, how pitiful it made her look.

Oh well. She’d just have to deal with it. Enduring was familiar to her.

“She wanted me to take her to go grab something to eat!" Yuji blurted out, still gripping onto the girl's shoulder. ”She hasn’t really had any local cuisine yet!”

Hyouka raised an eyebrow, prying him off.

“I don’t recall you consulting me about this.”

“Sounds about right for you, Tanihara.” Moriyama remarked.

“Like I said, you’re gonna turn into Tachibana!” Ueno added. ”Ditching us for girls! Do you think you’re better than us?!”

“Then why don’t you invite us to get food?!”

“Because he’s embarrassed that we’re gonna watch him get bossed around!”

“Well,” Hyouka calmly cut him off, dropping her bag into his hands. “I expect you’ll have no issue paying for my meal. After all, you didn’t tell me to bring my wallet, mongrel.”

“Thank you for the meal.” Hyouka put her hands together, bowing her head slightly. They were at a small, inexpensive restaurant not far from the school. A bowl of kishimen sat in front of her- flat udon noodles in soy sauce, with sliced leek on the top. It was one of Nagoya’s local specialties, according to Yuji.

He sat at her side, Ueno and Moriyama across the table from them. The three boys were being rather loud, laughing openly and talking with their mouths full, shamelessly slurping their food.

Hyouka found their lack of basic table manners to be utterly appalling. The other patrons who judgmentally glanced at the group only gave her a sense of secondhand embarrassment, only making her want to be invisible. Being lumped in with those rowdy, uncouth boys was a repulsive idea.

“Would you shut up?” Hyouka asked sharply, her eyebrows knitted together in obvious irritation. “You’re being nuisances.”

The trio fell silent momentarily, stunned by her sudden outburst, before chuckling to themselves.

“Who the hell cares what other people think?” Yuji scoffed. “We’re not here to impress anyone.”

“You really are dogs.” Hyouka rolled her eyes, turning away.

Looking up, Hyouka spotted that rather flashy boy she occasionally saw Yuji and his friends hanging out with- Ryuhei Tachibana. He didn’t seem to be as much of a troublemaker as the others, and the few times she had spoken with him, he had been rather pleasant, if not a bit too loud and overly familiar.

“You here to eat with us?” Moriyama rested his chin on his hand.

It was then that Hyouka finally noticed the girl clinging to Ryuhei‘s arm. She smiled brightly and waved at the group.

The girl was shorter than Ryuhei, but definitely a lot taller than Hyouka herself. Her school uniform, while personalized, was definitely also that of Inukami High School. She was rather curvy, with tanned skin and a cute, youthful looking face. Her eyes were hazel and catlike, accentuated by dark pink eyeshadow. A pair of hoops decorated her ears, with two cartilage piercings in each. Her layered, bleached blonde hair reached just below her shoulders, worn in a half ponytail with fluffy bangs. The X-shaped clips she wore matched the ones in Ryuhei’s own hair.

It was as if the couple was quite literally made for each other.

“Heya, aren’t you that girl who just transferred?” Ryuhei’s supposed girlfriend excitedly turned to Hyouka. “I’ve heard a lot about ya around school!”

That didn’t sound too promising. She hadn’t really made a pleasant first impression with her classmates, after all. Her name was now widely associated with the title of "Ice Queen."

Hyouka let out a soft sigh.

“My pleasure.” She responded coolly.

Surprisingly, Natsumi didn’t seem at all discouraged by Hyouka’s standoffish tone. Her cheerful expression remained as she looked up at Ryuhei.

“Ryu-chan, why don’t you sit with your friends today? I’m sure you have plenty of things to catch up on!” She suggested. “Meanwhile, Hyouka-chan and I can get to know each other!”

“Hyouka-chan?” The albino girl stiffened at the overly familiar title.

“Aren’t we on a date though?” Ryuhei looked down at the blonde girl, a confused smile on his face. “I-”

“That’s enough, Tachibana!” Moriyama reached over to seize him by the sleeve of his sweater. “You can’t run from us for any longer! Sit down!”

“Hang out with us already, you traitor!” Ueno chimed in.

“Yeah, you go sit with her!” Yuji spoke to Hyouka, seeming all too happy to get rid of the girl. He beckoned Ryuhei over to take her place.

“Fine, fine!” The boy gave in, approaching the table.

Given no other option, Hyouka rose from her chair with a sigh, picking up her bowl and moving to a vacant table near theirs, sitting down. A smiling Natsumi sat down across from her, and Ryuhei took the seat next to Yuji.

“Ooh, you’re having kishimen?” The blonde girl remarked, taking note of the bowl in front of Hyouka.

“I’ll get some too! Ryu-chan, make sure you order something!” Her hand went into the air to beckon over a waitress.

It wasn’t long before Natsumi had a steaming bowl of udon noodles and soy sauce in front of her. She clasped her hands together, slightly bowing her head.

“Yum! Thank you for this meal!”

With that, she begun to eat. However, much to Hyouka's relief, she had much better manners than the three boys she had been stuck sitting with earlier. There was no obnoxious slurping nor attempted conversations with a full mouth.

“So!” Natsumi chirped, dabbing at her lip with a napkin. “You’re not from around here, are ya?”

“No, I was born and raised in Kyoto.”

“Wow! So what brings ya to the city of Nagoya?” She leaned forward with a smile.

“My home is being completely renovated, so my family has come to stay with my grandmother for the time being.”

“I should be able to return home around September." Hyouka replied, tucking a strand of hair behind her ear. Natsumi frowned faintly.

“Aw, what a shame! Why not just finish the school year here?”

“We have business back in Kyoto.”

“I come from a family of traditional artists and entertainers in the Gion District.” The girl explained, poised in her seat. “My father is a kabuki actor, and my mother is the owner of an ochaya and works as a geiko as well.”

“Geisha.” She corrected herself, having spoken the word in her Kyoto dialect.

“Did ya work with them too?”

“I did nihon buyo performances. I specialize in traditional dance.”

“For real?!” Ryuhei blurted out, apparently having been listening to the girls’ conversation. He elbowed Yuji. “You never mentioned that when you were talking about her, y’know!”

Hyouka raised an eyebrow at the boys.

“H-Hey!” Yuji protested. “Don’t make it sound weird! It’s not like that! Besides, I didn’t know either!”

“Didn’t you attend middle school together though?” Ueno chimed in. “I remember that part for sure.”

“Oh yeah! What was Yu like back then?” Ryuhei curiously leaned toward the albino girl.

Hyouka glanced towards Yuji, who seemed to stiffen, his eyes wide. It was more likely than not that he had left out details of just what kind of dynamic they had in junior high.

More specifically, he probably omitted the fact that he had been the definition of a bully.

Her eyes narrowed slightly as she stared back at him.

“He was rather stupid.” Hyouka remarked, leaning back in her chair. “All he and his friends did was make trouble for everyone else. I couldn’t stand him. Oh, and his forehead was huge.”

“H-Hey!” Yuji argued, self-consciously covering it with his hand. “It was just my bangs! They were too short!”

“Keep telling yourself that, you dog.”

Despite his annoyance at the cheap insults she had hurled at him, Yuji definitely seemed relieved. Hyouka felt rather merciful for not outright exposing his past behavior, though she had absolutely considered it.

Moriyama and Ueno snickered at this, reaching over to pry away his arm.

“Not much has changed, huh?” They jeered at him.

“C’mon guys, knock it off!” Ryuhei tried to mediate the situation, aware of the annoyance of the restaurant's fellow patrons. “We’re gonna get kicked out!”

Hyouka sighed, rubbing her temples. Natsumi giggled, resting her chin on her hand.

“Wild, aren’t they?” She remarked.

“That’s quite an understatement.”

“Wanna get out of here, Hyouka-chan?”

She only hesitated momentarily.

“Sure, let’s go.” The petite girl sent Yuji a pointed look as she rose from her seat, grabbing her bag. Natsumi stood up as well, and the pair left their table.

Yuji would be paying for her meal, in return for the protection of his secret.

It was only fair, after all. 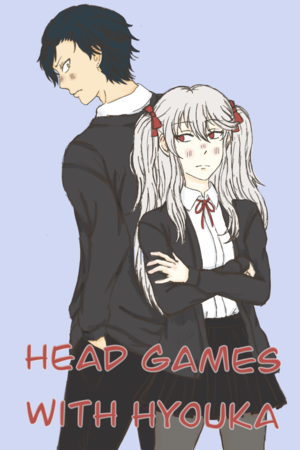