PROLOGUE: THE PREDICAMENT OF THE CHICKEN TRIBE

The Beastman Saint is H*rny, so I was Kidnapped to Another World Vol. 7

Located a few miles away from the southwestern shores of mainland Cherwind, the islands forming the archipelago of the bird-like Avinus tribes were an untouched natural beauty. Rolling hills covered in lush evergreen trees dominate the countryside, dotted with few clearings that served as places for the Beastmen settlements. Offshore was the rich fishing waters of the land, cultivated by the underwater-dwelling Isidus tribes; where both men and beastfolk benefitted from the blessings of nature. There was no human city in this place, save for some villages that served as a stop for the occasional trade caravans that mingle with the natives.Bookmark here

It was near the human territory of ‘the Enclave’. Even so, the first permanent human settlers were yet to arrive in that place, and for good reason too. For the land of the Avinus may be considered a paradise, albeit a deadly one. Hordes of wild leviathans roam freely, usually pursued by their natural predator, the groundworms. Harpies had also made nests in some hilltops, ambushing unsuspecting foragers who entered their territory. And, as if those were not enough, it was one of the breeding grounds for the Cerberus—its puppies were being sold as exotic pets for the humans back in the land of Chersea.Bookmark here

This was the situation when the first of the Avinus tribesmen arrived, after being ‘resettled’ from their old lands back in what became ‘the Enclave’. Fortunately, most of them could fly, and so they avoided the dangers that they encountered when they landed. In due time, things may have started rough, but the Avinus tribes eventually ‘learned’ to tame the land. Copying what the humans did on the mainland, they divided the islands into three parts: the Safe Havens, where the most powerful of the Avinus lived; the Midlands, where the weaker tribes found their home; and the Fringes—where only a few brave Avinus men dared to venture.Bookmark here

And on the Fringes, there lived the weakest among the six tribes of the Avinus, the Chicken tribe.Bookmark here

“Mama, when can we have food? I’m hungry!”Bookmark here

“Nagi, remember what I told you before? Once the foragers returned, we can eat.” the mother leaned over to coax her child, “Just be patient and let’s wait for them.”Bookmark here

Like the other chicken tribe members, this pair of mother and son stood by the gates of their little village, eagerly awaiting the return of the foragers their community had sent out. Though the nearby surroundings were known for their dangers, the village elder had no other choice but to send men to look for food. After all, though they tried to imitate the humans in farming, their attempts failed.Bookmark here

“Here’s to hoping they succeed this time…” the village elder named Habu whispered as his eyes beckoned far from the village gates. Beside him was his daughter, Yatoi, who couldn’t keep her fidgeting to herself.Bookmark here

“I’m worried about Ruja.” she told him, “My brother may be one of the strongest in this village, but I still couldn’t cast away my anxieties.”Bookmark here

“Haa…Ruja maybe my family’s heir, but these are desperate times.” Habu could only shake his head, “Our people can’t go on without food.”Bookmark here

“I understand, father. It’s just that…aside from you, he’s my only family left.”Bookmark here

The village elder stared at his daughter; though she tried to hide it, sadness and pain were still clear on her face. And he perfectly knew the reason—only a few sleeps ago, they lost another member of their family his youngest child. However, unlike Ruja and Yatoi, this child of his was stubborn and a fool. She kept on saying that the tribe should learn to ‘stand up on their feet’, meaning they defy the laws of the Avinus and settle back at the Safe Havens. That was unthinkable, of course, for doing so would make them earn the wrath of the powerful Eagle tribe.Bookmark here

Besides, the Holy Saint Ruro ruled that they be given the lands of the Fringes. Who are they to go against what the heavens decreed?Bookmark here

And so, Habu told his youngest daughter that it’s impossible. The Chicken tribe was inherently weak, and going against the laws of the heavens would be counterproductive. He even tried to discourage her from any foolish actions, but his efforts went in vain. She packed some of her things and sneaked out of their village in the middle of their ‘long sleep’, leaving a message through someone that she was going to prove that the ‘Chicken Tribe could fight’.Bookmark here

How? By fighting and killing one of the two human heroes currently alive: the Iron Princess, or that commoner general, the Fist of the North Lands.Bookmark here

“…” Habu shook his head once again, and let out a sigh, “She’s dead even before she reaches the mainland…”Bookmark here

“Hm?” Yatoi turned to him, “Are you saying something, father?”Bookmark here

“I just remembered that foolish sister of yours.”Bookmark here

Yatoi fell silent. Though stubborn and a fool, she had loved her little sister despite all her flaws. If only that person listened to them, she would still be alive.Bookmark here

“!!!” Though her thoughts were drowning her consciousness, Yatoi was brought back to reality by her father’s voice.Bookmark here

Indeed, close to the limits of the village, several Chicken tribesmen appeared. The villagers were initially ecstatic; however, their joyous celebrations soon disappeared when the dejected figures of their foragers became clear. They failed in their mission. However, the food was the last thing on their minds. Much to everyone’s horror, only a few of the men returned.Bookmark here

“What happened?” Habu asked them, “Where are the others?”Bookmark here

“Chief, we stumbled upon a nest of harpies.” one of the survivors answered, “Aji and Eruki were caught in their traps. Ruja told us to run as he tried to hold off the harpy attacks.”Bookmark here

At that moment, it was Yatoi who first broke down in a terrible cry. Habu froze on his spot; for a short period, he lost two family members.Bookmark here 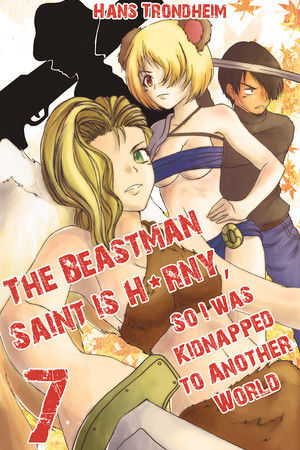 The Beastman Saint is H*rny, so I was Kidnapped to Another World Vol. 7