It's been already three years since my new life together with the ones that I consider my older brothers started. Even though it's only been three years, it felt like we've been living together since birth. Taiyo is the cheerful yet kind of childish brother, and Tsuki is the responsible and protective big brother figure, any child would want.
As for me... I am the younger brother that always has to rely on my older brothers. Taiyo and Tsuki are for me... like the sun and the moon.
Bookmark here

The strong sun rays are shining upon me. The forest quieter than usual and... in front of me standing now... is a youth standing in a noble pose, with one hand behind his back, and his wooden sword pointed at me.
As we approached each other with our swords, the time seems like it was stopped. As our swords intersected, the sound of the wood hitting resounded in the whole forest.
After countless exchanges of blows, the winner of this mock fight was decided. Looking at him, I see his eyes looking at the worn off, wooden sword, as it is flying above his head. As soon as the sword reached the ground... it got stuck in it.
I lay my hand towards the kneeling boy and say smiling sincerely:
"You almost got me this time, Taiyo."
"You think so? I feel like I got beaten way easier than usual.
"Keeping one hand on the back of his neck, he grasps the hand that I was laying him... But instead of getting up, he drags me and pins me down to the ground while muttering.
"I will win next time! Got it?"
"Understood! Will you let me go now!?"
He starts laughing while keeping me pinned down, probably trying to show me that he is still the older one... even though with only a few months...
We played like this with our swords almost every day. We usually did it after finishing our tasks in the city, but now, it's a special day. People in the city don't work today as it is the Full Moon Festival day. An event that takes place once a year.
Because we weren't attending the festival, Tsuki left for the city to get some goodies for us so we can celebrate how we can. We didn't usually do anything special on the festival day, but probably since we worked so much in the past few days, Tsuki thought it might be a good idea to relax a bit.
As I get up from the ground I was being pinned down on, I hear Taiyo saying out loud while loosening his grip on me.
"Good! Now that I rested a bit, it's time I bea-"
He probably wanted to say that he is going to beat me like he always says, but suddenly, a shadow falls upon us, catching our attention.
"It looks like it will rain..." I say after seeing the dark clouds slowly covering the sun
For me, the rain clouds seem to have appeared out of nowhere, but it might be because I didn't pay any attention to the environment up until now...
"I hope brother Tsuki will be fine, he doesn't have the umbrella with him..."
Taiyo starts smiling while looking at the rain clouds and says:
"He will be alright, and if the rain does catch him, I will laugh at him while he will try to dry off!"
With a rather disappointed expression on my face, I reply to Taiyo with a line that I knew he wouldn't want to hear.
"If he gets caught by the rain, so will the food that he is going to buy..."
After a few seconds of awkward silence, Taiyo falls on his knees.
"I regret everything I said until now... Please, god of rain, show mercy to the foo-, I mean Tsuki!"
"It's alright! He won't get caught by the rain, or at least that's what I want to believe since he left an hour ago..." this is my reply to Taiyo's exaggerate prayer
"Good! Now... It's time I take my revenge!" says Taiyo after picking his sword up from the ground
Like this, the two of us return in the same noble, duelling pose and start to share sword blows until the daylight fades away...
A few hours ago, we were laying on the ground looking at the cloud-covered sky.
"So, how is it...? Thirty-four wins for me and zero for you?"
"Don't buff your wins that much!"
"It's only thirty-three..."
I start laughing hearing his reply to my question. I never lost against Taiyo in a mock battle... but he always does manage to wear me off. I'm exhausted...
While thinking about this, a few raindrops start falling from the sky on our faces.
"So cold, yet it feels so good after all this swordplay!"
"A-ku-shi! Let's go inside or we're going to catch a cold!"
"Just a little bit more!"
"No! You are all sweaty, I can't let you stay there even one more second!" And like this... Taiyo starts dragging me towards the cottage. I wonder if Tsuki is going to come in time... After all, he might get caught in the rain.
Just before getting his hand on the doorknob, Taiyo stopped... and even I stopped behaving like a child and looked towards the forest, where a frightening sound could be heard. The sound of howls is continuously resounding in the forest and before we even realised it, the source of all that got closer than we thought.
We didn't even get to enter inside, as we got frozen in fear. Something that we never thought we'll be seeing in our lives... Fangs longer than the wooden swords we used to play with and silverish claws that looked as they were shining. Those beasts are now... surrounding our house...Bookmark here 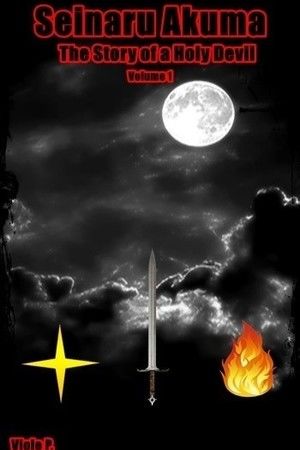