I Didn't Get Paid Enough For This

“Death is a belle, you shall dance with her till the end,

Feel her beauty under your hands, and fall captive between them.

You will be compelled to let her go, but you never can.

As you sink deeper into the unending darkness of her hollow eyes, every sense of understanding leaves your body, until there's nothing but love for her left in you.

It is then you close the gap between,

As the final act begins.

You are now a massive subject of everyone's gaze. The universe is your stage, and you are the one dancing on the battlefield with death…

This is the beginning of the final act.

'The stage is set, curtains are up.

For the final dance with death to begin.”

The vast expanse of space lay before her in all its glory, scattered with pinpricks of white dots and red-coloured cosmic gas painting the darkness with a peculiar warmth. Aurora Dastune - sixteen - slender, gorgeous blue eyes and mauve hair tied neatly into a twin tail, was cooped within her panoramic cockpit’s warm seat. Her pale skin was bathed in the reddish hue of the mechanical beast’s proximity sensor.

“Shut up…” Aurora muttered, sneering at the irking robotic voice, as she tried to find the mute button. Her back hurt from sleeping on the cockpit seat and a wave of exhaustion swept over her. Lack of proper sleep was not uncommon among the Federacy’s pilots but still for the Commander to make her do a two-night shift in one go was just absurd.

They better pay me in gold for this.

"The sensors." She yawned. "Please take them out and throw them into the burner for me next time."

<You know, I can't do that. It’s protocol and also for your own safety.>

"Do you think I need them?" she asked, her pink fingertips playing with a loose strand of hair, before tucking it behind her ears.

He was rigid to an annoying degree, but it wasn’t something she hated. Maybe a bit annoyed but never hate. Hating would require too much energy.

Aurora clicked her tongue, proceeding to quickly go through all the final maintenance checks of her Mecha, or like most people of this era called it, 'Nexus'. She was now completely awake. Her hands went back and she pulled over her space suit's helmet, using her free hand to touch the small glass pad on her left, activating the life support system of her suit, all in one practice, fluid motion.

From the corner of her eye, she noticed a beam of light approaching her. Using the optical sensors, she tried to enlarge the object but they were too far out for the sensor to capture a clear image. She had a hunch of what the object was but she decided on waiting for the Commander in charge to inform her.

Aurora sighed, pushing down the control pad she quickly began to tick off the checklist, making sure that her Nexus, nicknamed ‘Bastet’ was ready for launch. It was a long and tiring process but for the sake of the safety of the pilot, it had been engraved into the minds of the young cadets who were enrolled in the Federacy’s Nexus division.

However, Aurora, who never had any kind of formal education regarding piloting the Nexus, simply did the checks as a mere formality.

<Affirmative White-Cat. Transferring the command to the Commander in charge, Godspeed.>

Aurora Dastune, codenamed-White Cat, sat cross-legged as she waited for her commander to come up running. She smirked, the objects that had been speeding towards her were now close enough for the radars of the Mothership ‘Ark’ to label it as a threat.

<White-Cat, this is your commander speaking.> He said, <We have noticed the presence of two foreign objects heading towards the Mothership.>

“Greetings Commander,” She smirked, “White Cat, reporting. I can see the foreign objects approaching from twelve-o-clock. Request permission to deploy and terminate them.”

On the periphery of the Milky Way, where only the Galactic Pirates lived, any sign of foreign objects meant that the pirates had decided to prey upon them. But for the trained eyes of the Commander who has only ever known war, he never had any reason to have known this side of the Galaxy.

In fact, the only reason Aurora herself knew about them was because she was kind of similar to them. They killed people and stole their money and treasure while she on the other hand accepted a hefty sum for killing others.

<Permission granted.> The Commander spoke with urgency, lighting up the resource monitor in Aurora’s cockpit, displaying an enlarged image of the object that seemed to have been taken by reconnaissance drones.

On the monitor screen, she could see two giant robots, tinged in royal blue, with two wings protruding from their back, their main body was blurry since they were moving too fast for the drones to get a clear shot.

However, that was enough for her. The image had confirmed that they were indeed one of the many ‘Nexus’ units of Galactic Pirates. Pushing away from the console, Aurora strapped herself in and finally activated the airlock.

She had one job, and that was to exterminate any unidentified object that entered the perimeter of the Galactic Federacy's royal fleet. She couldn’t care less about whether it was a friend or foe. She was in here for the money, and once this expedition was over, she would grab the prize and blast off to her next destination.

"Can you tell me their type?" She asked, hoping to get some intel on the Nexus so she does not move out blindly. She was confident in her abilities but not to the point of stupidity.

There was a brief pause before the commander started again.

<Sorry for the inconvenience White-Cat. The Nexus in question is too fast for us to run a scan on them.>

Aurora rolled her eyes in annoyance.

That’s why I hate working with you all. So incompetent. Ah well, you gotta do what you gotta do.

She moved her eyes back to the proximity sensor. The tiny circular screen was now completely silent, displaying only the characters 10,000 Km, the distance between her and the enemy drones.

Aurora touched her chin, pondering. Now that there was no way left for her to confirm the type, she was left with only two options:

One: She waited for the enemy to come closer so that the command station could run a scan. But that would give her prey an upper hand.

Two: She moves in blindly and takes the fight to them.

Her rosy lips pursed into a sweet evil smile.

It's going to be a field day.

“Lower the catapult,” she announced. “I am taking the fight to them.”

Aurora frowned as she sat in her cockpit, stupefied. The air inside was warm and she was wearing her white spandex pilot suit, yet somehow, she felt cold inside. As the countdown began, a chill ran down her spine. The kind of chill that even the life support system of her suit couldn't adjust. The root of it lay deep within her heart. Even though she had gotten used to the battlefield to a degree where she felt nothing but an insatiable hunger to prey on her enemies, it seemed as if this cold sensation was a result of it.

As her Nexus ‘Bastet’ was getting lowered slowly towards the catapult, a distant memory resurfaced.

A memory from her first sortie. The day when she learned that to survive in this desolate universe, one would inevitably have to get their hands dirty. As she had blasted out into the emptiness back then, she was overwhelmed with fear. Her eyes bulging, as her fingers crushed the joysticks in a death grip, latching on to them for her dear life.

She remembered how her rosy lips quivered as she cried, surrounded by the enemy Nexus. A lot of them. And it was the first time she had ever encountered one. The glistening metallic giants, sculpted as a twenty feet humanoid, with a single wing protruding from its back, on its arm two-particle cannons that were pointed at her.

To her, the Nexus didn’t look like a mechanical marvel but a Metallic devil that was about to eat her alive.

Aurora had gasped at the sight of purplish particles concentrating on the cannon as the enemy aimed it at her. There was nothing left for her to do. This was it. A river of tears trickled down her cheeks while she cursed her fate.

She had clenched her jaws, as she tried to summon the courage, or whatever was left of it, to face her inevitable death. And then it happened. The particle cannon never fired as a golden aura enveloped her and her Nexus.

When she had peered outside of the cockpit, she was greeted with the sight of her Nexus already having punched the enemy, creating a gaping hole at its chest-where the cockpit used to be.

Now that I think of it, I never really found out the reason why Bastet moved on its own.

Shaking her head, she discarded the thought and focused back on her panoramic screen. Outside was a narrow tunnel lit up with white lights indicating the way outside. On the surface was a single track installed with a grappler that acted as a catapult to thrust the Nexus out of the ship.

The twenty feet tall robot ‘Bastet’ ignited its main thruster as its humanoid body floated upwards, latching itself to the mechanism of catapult. The triple wings that protruded from its spine angled themselves, preparing for the final approach.

‘Bastet’ had four limbs that were thick at the end. Its head had two white horns on either side as the triple-eyed sensors on its metallic face came to life. At its chest was the cockpit which - like any other - had a spherical shape embedded in the middle.

As the restraints on the machine were released, Bastet blasted off, flying through the launch tunnel and into the sea of stars, where her enemies awaited her.

A/N Hey everyone, thanks for picking up Lost Paradise, I really hope you like the story and for you Mecha fans I really hope you enjoy the future chapters. Do comment and give your feedback means the world to me.

P/S Special Thanks to Cosmo for editing. You rock Sis. And also Wolfy your typesetting is the best, I couldn't ask for a better cover than what you have made for me. 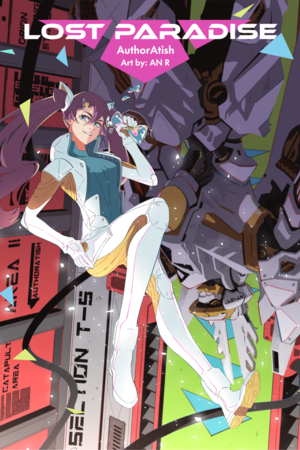 The Siege of Zerai
klinestife

The Siege of Zerai