Kaz watches the scenery roll by while watching for more low branches, before long they come up on a meadow with a massive mountain range behind it, far off in the distance. The dragon slows to a stop, “That’s it!” Saphana shouted excitedly, she then starts sprinting towards the mountains, Kaz is almost thrown off her back, but manages to get a hold of her neck in time. “Look closely Kaz, see the cave there at the base of that hill? That’s the entrance to Rath, my home!” Kaz squints and peers over her shoulder to see for himself, then he carefully sets himself back to holding onto her neck. “So, can you explain something? Why exactly are dragons looking for someone like me? Why am I so special?” he shouts forward. Saphana stops and looks back at him, “You can actually talk to and understand us. We understand humans, but they normally cannot speak to us, until I found you. Most of them run away when they see us. I can’t explain it, so I am taking you to see my Father in town.” She then pressed her wing to his chest and muttered something incomprehensible, then an oddly shaped symbol that resembled a human silhouette with massive wings appeared on Kaz’s breastplate. He looks at her with a puzzled expression, “That’s so the other dragons will not mess with you while we are there. A human walking around unaccompanied in Rath is unheard of.” She explains to him.Bookmark here

“Oh, I see. I’m your property now.” Kaz grumbles. He then bolts upright to follow as Saphana walks into the opening of the cave. “Wait, wait, wait. Unaccompanied? You’re leaving me alone!?” he says all flustered. “Well, I can’t take you to see Father without making sure he’s not busy. So, you can just wander the marketplace while I go inform him of our situation. Does that sound alright? And no, you aren’t anyone’s property. I just don’t want you getting in trouble while I’m gone! You’re no help to us if you end up a pile of ashes!” She points him towards the market and then struts off up the hill to a large building up the road.” What appears to be a bookstore catches his eye, he wanders inside and is greeted by an older looking jet-black dragon, who is quite smaller than Saphana, but still much larger than he is.Bookmark here

The dragon squints and looks at him closely, and proceeds to shout out the doorway, “Whoever left their human here better come get them, or I’m going to use him as a bookmark!” Kaz shudders at the loud yelling, then turns to the dragon and shouts, “Excuse me! I’m not anyone’s human, and for the record, I would make a terrible bookmark!” hearing this, the black dragon whips around, its tail whiffs past Kaz’s head. The dragon stoops down low and puts its face near his, it then sees the symbol Saphana inscribed on his breastplate and trips over itself as it tries to sit upright. Bookmark here

The dragon then lowers its head, “By my scales, I never thought she’d actually find you!” it speaks. Kaz looks back with visible confusion, “Find me who?” he asks the dragon. The dragon opens its mouth once more, “You will learn soon enough. I am Ishvara, the bookkeep of Rath. It’s nice to meet you Skaldheir.” Kaz pats Ishvalda’s head, “Nice to meet you too Ishvara. My name’s Kaz. You know, where I’m from I worked as kind of bookkeep too!” Kaz then thinks to himself as he pats her head, “She’s so much smaller!” Ishvara’s eyes light up and she then asks Kaz several questions, like his favorite book, genre, does he like hard or soft covers. Bookmark here

As Kaz tries to calm her down, “I could lend you some of my favorite books, I have copies of them in my car…” Kaz’s voice trails off. Kaz jumps up and shouts “My car!” he fiddles around in his pockets and finds the keyring with a single key and a cheap metal dragon-shaped keychain he got at a truck stop on it. He remembers that he has all kinds of stuff in his car, the snacks and soda he had bought, and all the books he loaded the night before all of this madness began. It was an electric car he had bought to be more eco-friendly, it should be okay to drive if it was still there! He turns to Ishvara frantically, “I have to find Saphana and get to my car, all of my belongings are in there!” Ishvara looks to him, “What is a car, if I may ask?” she inquires. Kaz, who is distraught with anxiety at the moment, “Gah! It’s like a carriage, made of metal, and doesn’t need a horse. I really have to be going, I really need to find Saphana! Can you help me find her?” He begged.Bookmark here

Ishvara looked at him curiously, “I can’t help you find her; my eyes aren’t quite what they used to be. I can’t see five feet in front of me without it being blurry. But I’d be willing to bet my little claw that she’s with her Father, at the hot springs up the way.” Kaz thanks Ishvara, assuring her that he’d be back sometime, and darts off up the hill towards the building carved into the side of the mountain with thick clouds of steam pouring out of the windows.Bookmark here 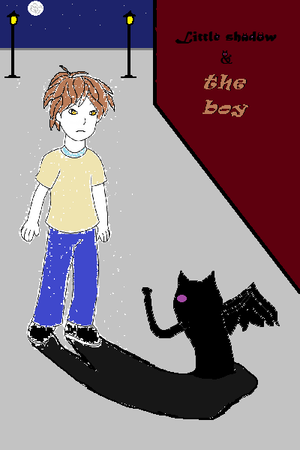