The news  "an unusual video has gone viral, you want to know what it is about stay tuned for the next report coming after the break".

These are the words mentioned by the elegant news anchor, every morning in his blue suit, purple tie with black polka dots, serious look and alarming tone when talking about the sighting, no doubt about it.

- I turn on my cell phone, the wallpaper jumps immediately, an image of a black wolf howling is the wallpaper, I go to the wetube section, I check the trends and they all talk about the same topic, have you seen this video, it's mind-blowing, the montage is incredible, this is government stuff .....

These are the titles of each video, it's the new trending topic among wetubers, I scroll down looking for something different to watch but the list is extensive so I have no choice but to watch anything.

- I'm not the only one to watch the full video of the grey man, I click and watch it before wetube quickly scrolls it down -

The title grabs my attention leading me to click on it instinctively, just as it says just the dark image in camera format, no wetuber talking just the video starting.

- who you mean, military plan maybe it's another one of those conspiracists .

The sound of dogs barking in the vast darkness of the night that is barely illuminated by the headlights on the corners, an alley is the site focused by the camera, a couple enters the shot walking very quietly, he wears a leather jacket and a hat that protects him from the cold, she a dress and a coat, both whisper, the woman says something in his ear and the man lets out a big laugh, you can tell they are a couple by how affectionate they behave.

- This is the video, if this is it, it's the first time I haven't seen a supernatural video with bad quality.

He chuckled softly as he continued with the video, sounds coming from an alley caught the attention of the man who instantly let go of his partner's arm.

He pulls out his cell phone, turns on the flashlight and points to the back of the alley, just a dumpster with some boxes on top, he walks in and looks around.

The sound of the boxes alerts him and he turns quickly, when he realizes a black dot jumps on him making him fall from the scare, he drops his cell phone while lying on the ground with his eyes closed.

His companion's laughter was heard, so sweet and disguised, he heard it and brushed the black cat off him, standing up he shook his jacket and picked up the cell phone, he laughed and turned off the flashlight.

His companion's laughter ceased and turned into a muffled warning, he found that way of acting strange, she pointed her finger at him from behind but he paid no attention, she covered her mouth and her eyes jumped with fear.

He approached her with the intention of calming her down, but at the first step his breathing became labored, he did not feel the ground on his feet and all he felt was the cold pressure exerted on his neck.

His countenance went from calm to desperation for oxygen, with his hands he tried to free himself from the large hand that held him in the air about 10 cm above the ground.

His moans began to jump but these were fading along with his strength with which he was trying to free himself in the most useless and only way he could do while she looked at him terrified.

Sounds coming from the shadows as he heard this his companion's voice came back - help ! help ! - were his screams at the top of his lungs captured by the camera but unfortunately for them it was midnight and it was very difficult for someone to help them at that hour plus they were in an area far from the center of the city.

Mustard gas entered the scene from the bottom of the alley enveloping both of them, but only one of them reacted to it.

The man began to twist his whole body, the creaking of his bones could be heard all the way to the camera, with strange movements and with a lunatic countenance he planted his hands on the arm that held him in the air, his strength was so great that he made them release silver liquid and let him fall.

On the ground he was still writhing, holding his head in pain, his pain was so immense that he began to beat it against the ground.

- Honey - she moved a little closer with her mouth covered by her forearm due to the mustard gas.

He raised his head, his skull cracked as a pair of antennae began to emerge, in an instant he jumped on her, knocking her to the ground.

On top of it he moved his head in a very strange way as if he was trying to break it, the video was cut off with a message.

- wetube has removed the video due to unsuitable content for the public, thank you for your understanding.

- fuck you wetube since you cut me off in the middle of the action.

I logged out of the app with the intention of logging into social media but got a notification with a message.

- you are one of the last, I am a bot programmed by x96 this is the video he shared and sent it to you so you have knowledge of all that is to come, hope it helps you prepare for what is to come.

I followed the video on my cell phone, the man was on top of her, spilling the drops of blood from his skull all over her, as she tried to wriggle free.

From one moment to the next he tore her shoulder with his teeth, blood was escaping from her mouth as from her shoulder, he pulled away for a moment, stretched out his tongue with the intention of licking her mouth which was smeared with blood.

She crawls on the ground and he savors the small mouthful of meat he had taken, a few seconds pass and he begins to act strangely, as if he had picked up a new scent, with his nose he breathes in the whole environment.

He takes it back to his partner who is slowly moving away with slight sobs of pain, he pounces on her, sniffs her whole body until he stops at her intimate part.

She is subdued again, her feet hit the ground while she writhes begging for mercy and help, but her partner pays no attention to her, acts immediately and with a bite in her intimate area rips off her dress with a bit of human tissue.

She screams in pain.

he spits out the piece of clothing.

he opens her mouth, A tentacle slowly comes out full of slime with an oval tip .

She screams and he emits a sound different from the words - turu tru truccc .

He prepares to continue torturing her but a humanoid being dressed in a suit with a large gray head enters the scene.

It sneaks up on them, with a direct kick to the head, it rips it off, the blood that comes out is not red in its entirety, it is transparent in some parts with a fetid and metallic smell.

She does not have a different fate, with a stomp on the head he destroys her skull leaving her brains scattered all over the sidewalk, he turns to the camera staring at her, pulls out an old revolver, his appearance was that of one of those aliens of which so much is said, with a big head, tall thin and huge eyes, but dressed in an elegant suit.

With the sound of the revolver the recording ends.

- What the fuck was that, the truth is that this was incredible the set up, the designs and the acting but I am going to enter virus to my cell phone if I have seen this of a strange message .

- Adam you are going off to college, you know, get settled in your new house and don't do anything stupid or I'll beat the shit out of you. 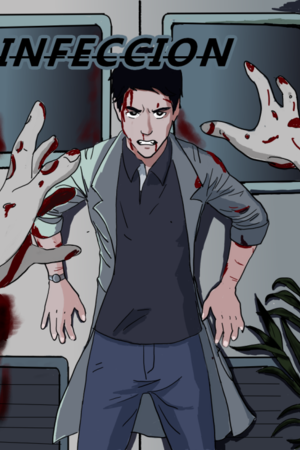