After two hours of putting everything where I wanted them to be, I wiped a bead of sweat from my face alongside a sigh of relief "I'm finally done... That was even more troublesome then I had expected..."

Since I hadn't really had the need to move my belongings and what not, it was even more surprising to see how many things I had accumulated throughout the years, some of which I didn't even know I had.

Seeing as how I was finished, I threw my worn out body on top of the bed and sighed to myself "I should probably go ahead and buy some food later tonight..." "But I also need to visit Miss Matsubara for dinner and then visit the girl from next door for whatever reason..."

Yet another sigh escaped my breath at the though of it. I wasn't against the whole idea of getting to know my neighbors a bit more, but a part of me simply felt somewhat concerned about the fact that I would be alone with a girl around the same age as me all the while wondering if her parents would even be alright with it.

"If she says that it's alright for me to be there, there should be no reason for me to be concerned about it... Right?"

Seeing as how I was going to have a relatively busy afternoon, I grabbed a new change of clothes, my towel and headed towards the bathroom to take a quick shower.

After around 15 minutes of lounging around in the bathtub, I dried myself off, changed into the clothes I had brought with me and exited my apartment to meet with Miss Matsubara.

I rang the doorbell once and I could lightly hear the sound of footsteps making their way towards the door. Slowly but surely, the sounds started getting clearer and clearer to me.

Before I could even prepare myself to what was about to unfold, the door opened up and standing before me was the same woman from a few hours prior.

"You came~!" "I thought for sure you were going to stand me up"

"Sorry about that... I kind of got stuck putting everything in place and didn't look at the time"

"No worries dear. Besides, the food isn't even ready~"

"..." Her gaze was focused solely on me, she slightly tilted her head in confusion and smiled at me once more "You're my guest, I can't let you help me"

"No buts. Come on in and take a seat in the meanwhile"

I bowed at her and as I made my way inside the apartment, I couldn't help but look around a bit. Everything was absolutely spotless, nothing was out of order and I could tell that she would put her heart and soul into keeping everything nice and tidy.

"Is something wrong, dear?"

"Sorry. I was just surprised to see how well kept everything is"

"Oh my, thank you for the kind words~" She smiled at me and glanced over at the couch "Please, take a seat. The food should be mostly ready in a bit"

"Thank you" I took a seat and as she headed off into the kitchen I didn't know what to do. I didn't want to simply start looking around the house nor act awkward in the place I was in.

As I glanced around for a bit, my eyes laid on a picture of Miss Matsubara with who I presumed to be her daughter, but as I stared at the picture a bit more, I couldn't help but notice the subtle and yet almost precise tear of the picture.

Even though I was slightly curious about the picture, I knew for a fact that it was something that I couldn't ask just like that, especially only after meeting her a few hours ago.

With those words and that in mind, I got up from my seat and headed towards the table. I took a seat and overlooked at the entire food that she had made "Isn't this a bit too much for two people?!"

"T-Thank you very much" With those words, I gave thanks and proceeded to eat from the food given to me. As I did so, out of the corner of my eye I noticed Miss Matsubara smiling at me.

"It's very delicious. I wouldn't even be able to cook something of this caliber if I tried to"

"You flatter me too much~" She gently cupped her cheek in embarrassment at my words.

At those single words... The sound of her chopsticks falling to the ground could only be heard. I looked over and was frozen stiff. She wasn't smiling. She was in fear. Anger. Sadness. They're were too many emotions happening in that moment that I couldn't identify even if I tried to do so.

Seeing as how she wasn't reacting at all, I gently called out her name "Miss Matsubara"

"... Huh?" She looked at me with a bit of confusion. Her tone of voice was low and I could barely hear her even answer me. But once she saw my face, the one sullen expression turned upside down into one of pure joy "Sorry about that dear, I just remembered something. I apologize if I scared you back there"

"No, I was just worried if I said something that I shouldn't have said"

"Nonsense, but I'm grateful that you worried about me"

She beamed me the same smile once more and continued on eating. Seeing as how everything had gone back to normal, I continued eating as well all the while she asked me questions about what I used to do, why I decided to move and what not.

But even then, in the back of my mind, the sight of her looking the way she did at the mere mention of her husband left a foul taste in my mouth. One that didn't let me appreciate the food that I was having in that moment,

After some time passed, we finished eating the dinner that she had worked so hard on preparing, I helped her to wash the dishes at the very least, she insisted on talking some more about herself as well as asking question about myself. Before I knew it, it was already around 4 o clock, since she was thankful for me to have spent my time with her, she insisted on giving me leftovers for around 2 to 3 days.

"There's no need for thanks, dear. As long as you come hang out from time to time, that'll be enough for me"

"You too" She smiled and waved at me as I made my way up the stairs. As I started on heading over to my apartment, I noticed that the door to Takahara-san's apartment was slightly open and as I started making my way towards it, she stepped out with a smile on her face.

"I see that Matsubara-san treated you nicely"

"Man... You're lucky to get some of her cooking. I wish I moved in recently!"

"..." Seeing as how I was given even more then I was anticipating, I glanced over at the containers and then over at the girl in question "Do you want some? I won't be able to eat everything myself"

"Really?! Thank you~" The girl beamed me a smile and walked towards me. Once the both of us were standing in front of one another, she peered into the containers that I was given and once she found something that had caught her eye, she grabbed it and smiled at me with the same smile.

"I should get going now" Just when I was about to start on heading towards my apartment, she suddenly grabbed my sleeve and gazed into my eyes.

"Weren't you going to come over?"

"I did say that... But aren't you're parents going to arrive from work soon?"

"Don't worry about them, they shouldn't have a reason to be angry at me for trying to get along with the new neighbor"

Thus, Takahara-san made her way back inside her own apartment all the while I headed on towards my own apartment. I left everything in the fridge, walked on over to the front of her door and knocked just in case.

She opened the door with a smile and allowed me to step inside. Her apartment had two bedrooms all the while the one I lived in had a single bedroom. The kitchen, living room and bathroom were far bigger then my own.

"Make yourself at home"

"Thank you..." I took a seat and glanced around for a bit.

"How old are you, Tokugawa-san?"

"You're 2 years older then me then" "Which university do you go to?"

"We study in the same one! What a coincidence!"

"Not really... It is the best university in the area"

She giggled at my words and proceeded to take a seat in front of me "You're a pretty funny guy. I have a feeling we'll get along just fine"

She smiled at me once more and the both of us simply continued talking to one another about university life as well about our childhoods.

Overall, Takahara-san was a funny girl, she was pretty, she was nice to be around with. Compared to other girls I had met, she was the nicest and most humble one which made it that much easier for me to relate with her.

But just as things were progressing smoothly, the subtle sound of the door opening resounded through the room.

"I'm home..." Just when I was about to look back and greet her parents, the sudden sound of something falling to the ground caught me off guard "Who are you and what are you doing here?!"

Before I could even introduce myself, the man in question glared at me. That alone was enough to tell me that I wasn't welcomed in that moment.

"..." She didn't look me in the eyes. She looked dejected. Sad. Even if I wanted to make things better, I knew I would fail. So, I simply stepped out and the door shut tight.

I entered my apartment, locked the door and sighed "I guess they didn't like someone else being in their apartment without their acknowledgement..."

I laid down on my bed and simply relaxed before I would need to head on out to buy some stuff for the next few days.

Little did I know that things were just starting... Things that were hidden away were starting to surface. Things best left in the darkness were surfacing only for me to be the one to listen, act and hope for things to change in these people's lives. 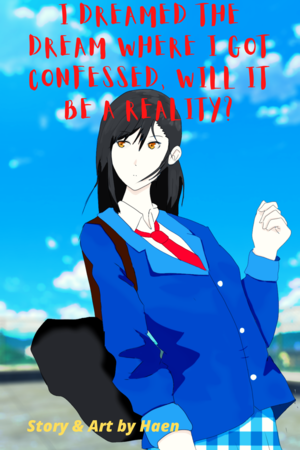