I was staring at the ceiling for pretty much no reason, but I looked at him when he called my attention.Bookmark here

He really is good at drawing. Bookmark here

“Which one is me?”Bookmark here

“Don’t play dumb, obviously the one without a monocle. Not to mention a buzzcut.”Bookmark here

He doesn’t respond warmly to my jokes, but I keep telling them anyway. It’s just fun.Bookmark here

“It looks like they both have buzzcuts to me. But I think I see the monocle now. I thought it was just a really big eye at first.”Bookmark here

He has to be the only kid in the world who wears one of those things. Bookmark here

He started erasing parts of his drawing to make changes. He acts like he doesn’t believe my false criticism, but then immediately goes to change his perfect artwork.Bookmark here

“Did you see something like that on TV?”Bookmark here

“Yeah, on yesterday’s episode of Painting Twins, Gale made a painting of himself with his best friend.”Bookmark here

“What was the best friend's name again?”Bookmark here

“What a lame name. All of the characters in the shows on my TV have much cooler names. Like Major and Cannon.”Bookmark here

“Those names are okay, I guess.”Bookmark here

He thinks Pembroke is better?Bookmark here

“I wonder why our TVs are so different,” he muttered.Bookmark here

“They just have what we like. You like your art shows, and I like my war and military shows. I’d probably die of boredom if I had to use your TV.”Bookmark here

“It’s not that bad.” He made the finishing touches to his artwork, and showed it to me again. “How is it now? Better?”Bookmark here

To be honest, it was better before, but if I say anything he’ll just change it again and make it even worse.Bookmark here

“Perfect!” He pumped his fist and wrote his name on the drawing.Bookmark here

“Why do you have to write your name on it like that? Everybody knows it’s yours. None of the other kids can draw as good as you.”Bookmark here

“I have to put my signature on my artwork. That’s what all of the artists on TV do.”Bookmark here

“You think your military shows are so good, but you’ve never even watched anything else before. You can’t call my art shows boring without having ever watched any, you know.”Bookmark here

“I could say the same to you, couldn’t I?”Bookmark here

“Well, I guess that’s true..." Lou paused for a moment before he continued speaking. "You know what, why don’t I just come to your room and watch the shows on your TV? Then I could really say for sure whose are better!”Bookmark here

“You know we’re not allowed to go to each other’s rooms,” I reminded.Bookmark here

I don’t know exactly why, but that is the rule. The only times I get to see him are during Recess 1, Lunch, and Recess 2. We all spend the rest of our time in our rooms either watching TV, taking tests, or just messing around.Bookmark here

"I know that! We'll just have to do it without getting caught," he said, practically yelling. Saying something like that as loud as he did is like asking to get caught.Bookmark here

I looked around at all of the grown-ups who were watching over us. It doesn't look like they heard anything. They're just walking around as stiffly as they always do.Bookmark here

"Okay, fine. As soon as Recess is over I'll take you to my room; but you have to be sneaky, okay?"Bookmark here

"Yup! Sneaky! Got it!" He hasn't lowered his voice at all.Bookmark here

"The first step to being sneaky is not yelling, you psycho! You're going to get us caught before we even start."Bookmark here

"Oh, yeah, got it. Sneaky..." He whispered that time.Bookmark here

As soon as the loud buzzer signaled the end of Recess 1, all of the kids started leaving to go to their individual rooms.Bookmark here

He was following close behind me, but whispering too quietly to even hear what he was saying. I’ll have to ask him to repeat it all once we get to my room.Bookmark here

Some of the kids we walked by shot us suspicious glances, but I’m sure they don’t really suspect anything. We could just be walking in the same direction while standing really close to each other. At least that's what they should be thinking.Bookmark here

“Let go of my hand,” I told him.Bookmark here

“I’m starting to get kind of nervous. Maybe this isn’t a very good idea, after all.”Bookmark here

It’s way too late to turn back now. His room was in the complete opposite direction. To go back he’d have to pass through the Recess Area again.Bookmark here

I practically dragged him the rest of the way, and swiftly closed my door behind us.Bookmark here

“You’re such a wimp,” I told him.Bookmark here

“We made it! Nobody caught us! I told you this would work if we were sneaky!” I’m just going to ignore that.Bookmark here

I turned on the TV and sat on my chair. Since there’s only one, he sat on the floor next to me.Bookmark here

“You know, since I’m a guest-”Bookmark here

“No, you can’t sit on my chair.” Bookmark here

“Oh, okay.” He adjusted his monocle and turned his attention to the television screen.Bookmark here

He probably doesn’t really understand what’s going on, since it’s his first time watching and this is episode 143.Bookmark here

“That guy with the hat is Major, and that one is Cannon. The little ugly fat one is named Pembroke.”Bookmark here

“Yeah, yeah. Right now they’re planning a siege on one of the enemy’s most important bases.”Bookmark here

“Are they going to do it? Take the base, I mean.”Bookmark here

“I haven’t watched this episode yet either, Mr. Monocle. But with Major calling the shots, they’re pretty much guaranteed success.”Bookmark here

After that exchange, Lou went completely silent. We both watched the show, saying nothing to each other. It looks like he really is getting into it. Not a surprise when all he’s watched before was that art stuff.Bookmark here

“You know, Gale, Pembroke- any of my characters really- they wouldn’t stand a chance in this world.”Bookmark here

“What exactly do you mean?”Bookmark here

“I mean they’d probably end up as Prisoners of War, or something. Just like that ugly fat guy did.”Bookmark here

He’s not wrong, but it’s not like him to just say that my shows are better than his. Bookmark here

“You are like Major, Bowie. But I’m more like Gale from Painting Twins, or the little ugly fat guy here.”Bookmark here

“Hey, what are you-”Bookmark here

“Now I get why you think my art shows would be boring. You probably would find them boring, if I’m being honest.”Bookmark here

I’ve only ever seen him with a smile on his face. This down expression just doesn’t look right on him.Bookmark here

“I don’t know whether I’d like your shows without having seen them before, though.”Bookmark here

I said that to try and cheer him up, but it’s like I was talking to a wall. A wall with a sad poster on it.Bookmark here

“If you’re Major, then who’s Cannon? And somebody has to be General too, right? But you'd be better off without an Emmie. She’s just annoying, and a bad person.”Bookmark here

What is he even talking about? How am I supposed to respond? There has to be a right thing to say, but I just can’t think of it. He’s comparing me to Major, but Major always knows the best quotable response, perfectly fit for the situation.Bookmark here

Before I got a chance to come up with anything that would suffice, there was a knock at my door.Bookmark here

“Get under my bed,” I told him.Bookmark here

He made a dash for my bed and baseball-slid right under. Once I was sure he couldn’t be spotted, I got up and opened the door. There’s a grown-up, standing all tall, looking down at me.Bookmark here

“Is there another one in your room?”Bookmark here

None of the grown-ups wear nametags. Only us kids have to. I always thought it would make sense for the grown-ups to have them too, so we would know what to call them, but now isn’t the time for that.Bookmark here

“Huh? There’s nobody else in my room.”Bookmark here

“Yes there is,” the woman said. “You know, lying is against the rules… Bowie.”Bookmark here

I looked down at my nametag, then back up at her empty smiling face. There’s plenty of space behind me, but I feel like I’ve been backed into a corner. What would Major do? What would Cannon do? If only I could ask General for advice. What am I even saying? General doesn't exist! Get it together, Bowie!Bookmark here

Suddenly, he came out from under my bed.Bookmark here

What is he doing?!Bookmark here

The woman walked over me like I was an obstacle, crouched down in front of him, and grabbed him by his light brown hair. She stared at his nametag for a full second before speaking.Bookmark here

“Lou… you are in big trouble. It is against the rules to go into another's room. You know that, but did it anyway. Now you must come with me for behavior correction.”Bookmark here

She stood up and aggressively dragged him out of the room, like he was some kind of animal. He was screaming, crying; but she didn’t react at all.Bookmark here

I’m saying that about her, but I didn’t do anything either. I just stood there, frozen. Just like Major in episode 1.Bookmark here

I picked up Lou’s fallen monocle from the ground and just stared at it. I shouldn’t have let him come to my room. I should’ve just told him no from the very start. I was an idiot to think just being sneaky would make breaking the rules work out. Not yelling didn’t make a difference.Bookmark here

I put the slightly cracked piece of eyewear in my pocket, and closed the door to my bedroom.Bookmark here

We know better now. We won’t try and break the rules ever again. Once lunch comes, I’ll be sure to remind him of that. I doubt he’ll need me to, though. That behavior fixing… whatever the lady called it will probably make it so he’s the one reminding me. Bookmark here

I know we were separated only a minute ago, but I just want to see Lou again.Bookmark here 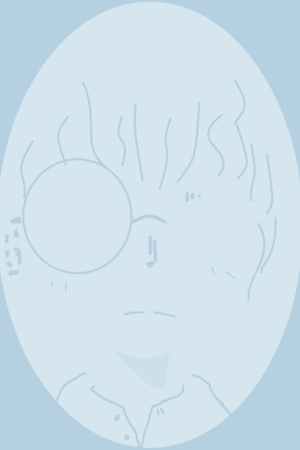