Both Kaz and Saphana are awoken the next morning to the sound of Lucia yelling, Kaz quickly gets up and heads downstairs. Saphana crawls down from the hole in the wall and circles back around and enters through the main hall to see what the cause of the ruckus was so early in the morning. Kaz and Saphana find Tasi's door cracked open, Kaz slowly opens the door and creeps in, Saphana peeps through the doorway. All around the corner Kaz was standing in was what remained of Tasi's bed, shreds of fabric and cotton filling covered one corner of the room in a meticulously arranged circle. In the middle of the pile was the lavender colored culprit, sound asleep. Kaz tried his best to calm Lucia down as he shooed her out of the room, after she was gone Kaz snuck up and lightly tapped Tasi on the shoulder. Bookmark here

Her eyes flickered for a second before opening, she looked up at Kaz and sprung up to wrap him in a hug. What Kaz found odd was that he couldn't feel her belly against him as she wrapped around him. He wiggled around and peeked down at her tail, sitting in the middle of her coils was a single bright purple egg. Kaz was at a loss for words, "Tasi, is that? Did you? Ours?" He tried to speak coherently, but failed over and over. Tasi put a single finger up to his lips and shushed him as she nodded. Kaz fell to his knees and carefully put his face up to the egg, it was warm. It was like he was pressing his face against a towel that had just come out of the dryer. Bookmark here

Kaz stood up and smooched Tasi on the tip of her nose and congratulated her, he wasn't exactly sure as to what he should say in this situation. He told her he'd be right back, Kaz walked out into the main hall and grabbed both their plates of breakfast and returned to Tasi's room. He set her plate in front of her and began to eat from his, Kaz asked her all about what to expect. When it would hatch, what they'd need. Tasi wasn't exactly a fountain of knowledge on the subject, so he figured he'd just read up about it with the book Ishvara had lent him. After an hour or so of chatting and intimate cuddling, Kaz stood up again, "Alrighty, I'll be nearby if you need anything, just shout." He reassures her, "Oh, and if you could apologize to Lucia. She's absolutely livid about what you did to your room. She's the one who cleans it after all." He winks at her as he exits the room. Bookmark here

Kaz walks back or into the main hall to find Lucia with a brooding look on her face lying her head down on the long wooden table. He walks up and sits in the seat beside her and pulls her into his lap, Kaz gently puts a hand on each of her neck and begins expertly massaging the muscles around her neck and shoulder joints. Lucia's large furry ears tilt back in pleasure and her tail springs straight out, then falls limp as Kaz continues to knead out all of her accumulated stress. Bookmark here

After ten or so minutes Kaz finishes his massage and Lucia melts back into his lap in a state of pure bliss thanks to Kaz's skilled hands. He looked down at her face, her cute little snout and tiny teddy bear nose drove him insane. "You're too adorable." As he whispers into her ear it twitches and tickles his nose prompting a loud sneeze. Lucia sits straight up and turns to face Kaz, "Can I ask you something Master…" she stutters, "I mean, Kaz?" She corrects herself mid sentence. Kaz looks back into her deep brown eyes and nods. Lucia looks at the floor, "Well, you've done so much with Tasi and Saphana. I was hoping we could do something together, just the two of us. Go shopping, walk around town. I want some time for just you and I." She says in a sort of sad tone, twiddling her fingers. Bookmark here

Kaz stands up and shovels Lucia up into his arms, "I'm taking Lucia out, we'll be before dinner!" Kaz shouts to Saphana and Tasi. He carries Lucia to her room and gently sets her back onto her feet, "We can't have you going out in that." Kaz states and points at her gown, stained with food from cooking. Lucia looks over at Kaz, and opens her closet, it was completely empty except for the one gown he had initially bought her. Kaz says he'll be right back and leaves, he returns with his bag full of coins, "Let's go then Lucia!" He tells her with a smile as he grabs her hand and leads her outside. Kaz stops by the training yard and tells Roarke that the two of them are going out. He waves them off, so Kaz walks Lucia to his car. Lucia kept staring at his hand, which was firmly grasping her own. He lets her hand go and opens the door on the passenger side for her, Lucia crawls in and sinks into the cloth seat. Kaz closes her door and hops in his side, he buckles her belt, then his own. Kaz turns the key, the noise causes Lucia to jump. She grabs his right hand and holds it tightly, he then pulls out and heads towards Vance. Bookmark here

Lucia had calmed down, after a seemingly long forty-five minute drive the two arrived at the Capital of Vance. Kaz slowly drove past the gate and parked in the spot he had previously on his last visit. He gets out and circles around to open Lucia's door, the two of them walk to the front gate holding hands. Kaz is stopped by the guard at the gate, however upon seeing Kaz the guard apologized and greeted the two. After a brief chat the two were let in without having to pay the usual tax. Lucia's eyes glowed at all the different storefronts and colorful buildings in the marketplace. Kaz tells Lucia there's a few places he wanted to stop first, they both walked hand in hand down the road.Bookmark here

Kaz stopped at the general store, the two walked in through the shutters and were greeted with a warm "Welcome!" from across the store. Kaz walked up to the counter and found Alden lurched over his sales ledger. "Hey Alden. How's business?" Kaz casually asked him. Alden looked up and saw Kaz and Lucia standing before him, he sticks out his arm and shakes Kaz's hand. "It has been hectic, Kaz. Everyone is in a tizzy lately, buying up all manners of things." He explains. Kaz introduces Lucia to him, she knows he won't understand her, she curtsies instead. "We're looking for some nice clothes, do you know where we can find some for Lucia here?" Kaz asks the old man. He tells Kaz of a store down the way that has all kinds of clothing, and that it was a bit expensive. Kaz thanks Alden and Lucia bows, then rushes after Kaz. Bookmark here

Kaz and Lucia come up on a glitzy building covered in stained glass, 'Wow. Fancy." Kaz says after a long whistle. Lucia follows him inside, but she is stopped by a brawny looking man at the door. "Hey buddy, she's with me!" Kaz shouts at the guy, apparently only humans were allowed inside. Kaz was furious, he marched up to the counter and slammed his big bag of coins on it, "I guess I could take all this elsewhere to shop for my Lucia." He raises his voice at the skinny, well dressed man behind the desk. "Oh ho, now. Let's not be too hasty here sir!" He sneers as he eyes the sack of coins. The man gestures to the bouncer at the door to let Lucia in, she then runs over and hugs Kaz from behind and sticks her tongue out at the doorman, Kaz feels eyes on his back as Lucia lets go of him. Bookmark here 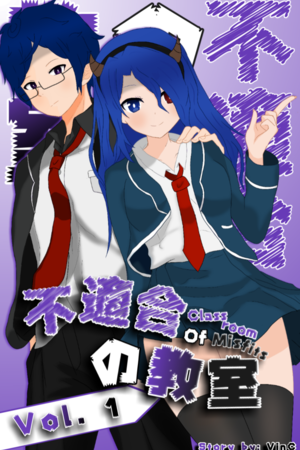