Something I haven't figured out is how and why the universe works. Even in the year 4,276 we gloat about how far we've gone both in terms of knowledge and lightyears, but even now we have too much to learn.Bookmark here

One thousand and one hundred years ago, a task force was sent over to Earth, in search of any materials they missed in ancient times. In the process of mining, however, they dug to the center and found the essence core of the earth. A blue orb the size of a child’s hand that is neither gas, matter, or liquid, but something on a spiritual level. As one of the crewmen touched it, the orb fused with his very being. As a single rose grew from his finger with the other crewmen shocked, all of the roses on the surface suddenly faded and died.Bookmark here

This was the first “force”, someone who is bestowed by the very center of a planet that remains within it. Although there are theories, no one currently truly understands how it works as of now. Most however don’t care, because those who are gifted with these cores are given abilities that an average man would kill for. So of course the average man wasn’t given these cores but instead, an elite group of soldiers, the planetary enforcers. However similar to the average man, these soldiers would reach their demises, some of illness, some of murder, and some of old albeit extended age. The men who would kill for these cores could now have a chance to gain these cores for themselves once the individual has died, a chance to become a force, and a chance to use their abilities for good. In came in new forces and out came the old, and now we are today, with the current generation, with me.Bookmark here

Of course, I am not a force, at least not as of right now. Though if the training I took pays off and I pass the trials, then I may be assigned to an essence. Regardless though, the first thing that I need to do is to stop laying within my open crypto chamber staring at the wall doing nothing. Because as all of this plays within my head and I consider what may occur, the beginning trials of the planetary entry will start in five hours, and I can’t look like a slob when that happens. A month ago I turned 18 years of age, and as reluctant as my mother was, she paid off the entrance fee for my birthday. She said, however, if I failed, she would not pay for it again, and that I would simply have to find another means of doing so.Bookmark here

So I rushed out of the frozen sleeping chamber and reached the dressonator. I reached for the monitor and looked through all the options it gave me, a bland albeit presentable set of dark blue pants and suit, a retro outfit in the style of the 100s, and a pink dress, inspired by the earlier of humans who has established monarchs. Why did the dressonator AI assign me something like that today despite the fact I’m not even female OR have any interest in olden earth culture? I’m not sure, maybe it wanted me to be experimental with my dressing style because I wear the same dark blue pants and shirt every day. Because as horribly boring and bland as it is, it makes me professional, and that’s exactly what I wanna be. Especially now as the judges and crowd decide the fate of my dream.Bookmark here

After I stepped in and out of the dressonator with my clothes properly put on for me by the machine, I stared at the holographic transmitter that awaited me outside, a call from mother, hoping that it wouldn’t be her taking away my opportunity, I answered. As always, she looked as though she had been in a completely different family tree, her long red straight hair compared to my white curly albeit somewhat cut style, her brown eyes compared to my blue tint of green, and her sharp and almost jagged face compared to my more rounded and young face. As she spoke, I eventually began to realize why this was however.Bookmark here

We then stayed quiet for an uncomfortable amount of time, something was wrong and I knew it, however breaking the awkward silence, “So why did you call me?”Bookmark here

“Right right.. Well… I have to tell you something… about your father.”Bookmark here

Oh no.
“You see he’s…. alive.”
Truthfully this wasn’t surprising to me, I've always assumed my mother was lying about it, her story was so full of stupid inconsistencies it was blatantly made-Bookmark here

“And he’s Saturn of the Solar Division.”Bookmark here

“...What????” I simply just stared at her in shock for a couple of seconds, trying to simply process the information she stated. Again, it wasn't surprising that he was alive or at the very least not involved in a space crash while also being attacked by terrorists who were also old gamblers he played with according to her. However, I never assumed that the man who has been bestowed with the very core of Saturn who has pledged to protect us from harm and give mankind a leap would be an idiot who slept with my mother and left. then suddenly realized, “Wait, so does that mean I-,”Bookmark here

“No you have none of his abilities,” my mother answered before I could ask, “he may not have been loyal with women but he was loyal to the rules, he had you BEFORE he became the Saturn force, you could say he had the time of his life before that.”Bookmark here

“Why did you not tell me any of this before?”Bookmark here

“At first it started simply because I thought you were too young to know but then, I just didn’t want to ruin your dream. You were always so dedicated and cute with it when you were younger, and I simply did not want to ruin that dream for you… as much as I hated it.”Bookmark here

I simply stared at her with no response.Bookmark here

“I told you today for two reasons, firstly, because I would feel awful if my son never knew the truth about his father, the second reason being that you are going to see him, and he knows who you are.”Bookmark here

When I was younger, I was in love with the Solar Division, the protectors of the universe, or atleast the most powerful ones at that, nowadays I feel a sort of love-hate relationship with the group however even then.. I felt flattered. “Did… did he love me back?”
“...he did.” After being quiet for a few minutes, all she had to say back to me was, “I love you Kaj, and good luck, with everything.” She then hung up.Bookmark here

See, I realize this is a small and insignificant detail in the grand scheme of the universe and the mysteries of it, but it's the annoying little surprises like that that make everything else hard to understand, especially for how I fit within it. Bookmark here 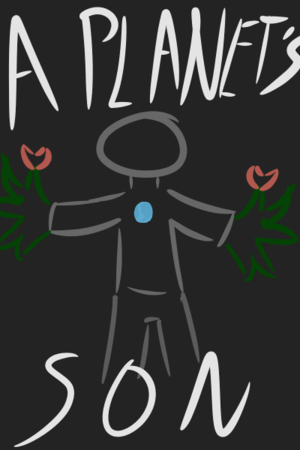