Back to square one

Taichi sighed loudly, amused. He walked swiftly into the room and gave both girls a piece of paper.

“HEH~ We’ve got individual book reports due for the literature club in one week! Please pick a book before the end of classes tomorrow!”

“Come on, come on, praise me! I’ve been practicing that line the whole way here!”

Haruko glanced quickly at Shun who was now fixing his hair. She couldn’t read his expression. Suddenly, Itsuki’s voice rang throughout the room. It sounded like another person was talking. Itsuki’s usual, cheerful voice was gone.

“Kaito. Explain this. Why’d you bring everyone here? Do you think that’s normal?”

Kaito sighed loudly and took off his glasses. He wiped them with his sleeve as he spoke.

“That’s not the point. You should have tried harder. Why did you bring that guy here, knowing what kind of stunts he’s pulled on Haruko?”

“What stunts? It’s awfully rude to say things without proof.”

Kaito said, looking at Haruko. He had a strange expression on his face. His eyes were fixed on her neck.

“YOU NEED PROOF? YOU SEE HOW THEY ACT AROUND EACH OTHER?”

“What the hell Taichi? Do you lack common sense????”

“ANSWER ME! WHAT ARE YOU ALL PLOTTING RIGHT NOW?”

“NO. Taichi what in the hell were you thinking? Seriously? And Kaito I thought you were all brains but you’re just a DONKEY WHO CAN’T READ THE ROOM.”

Kaito coughed loudly and dropped his glasses. Haruko let out a “eh?” as Itsuki made the craziest face.

“My mother remarried to this guy’s dad. Don’t take it out on him, he just wanted to help.”

Kaito hurriedly grabbed his glasses and slapped them onto his face.

“Yes, Taichi’s dad is the chairman of the school board. My mother has worked as his secretary for around four years now.”

Haruko stared at Taichi. She’d never seen him before. While it was true that she knew Shun for a while, he’d never talked about his mom remarrying. He never mentioned having a half brother either. She remembered Shun’s mother. She was gentle and nice, always cooking meals for her since Yulan was always off somewhere. This was quite the turn of events. Itsuki looked equally shocked. It seemed she did not know about this regarding Taichi.

“... I apologize for inconveniencing you.”

Shun said. He looked at Haruko.

“There isn’t much to be said. I see that now. Some people are bound to be wimps hiding behind others for the rest of their lives.”

“Say it again. Right now. Say it and see what will happen.”

Kaito split the two apart and handed Taichi a small piece of paper.

“Nishida-kun, Nagao-kun, I’ll bring the two of you back to the station. Looks like we are not going to be able to sort this out today.”

Shun slapped Kaito’s hand out of the way.

“No need. Trust me, I’m not interested in sorting anything out today or any day.”

He walked out of the room after giving Haruko another glare. All her hopes of reconciliation were destroyed. She hadn't made any progress since coming back to high school. Taichi bowed apologetically a few times before running after Shun.

“Itsuki it’s fine. It doesn't bother me at all. Thanks for this, by the way. Yulan-san will like it.”

Haruko held up the small gift box. Itsuki helped her pick out a nice golden brooch for Yulan. After Shun’s unexpected appearance, Haruko didn’t feel like walking around Nakamise for too long, despite Itsuki’s pleading. She didn’t try to convince Haruko too much though. It just didn’t feel right. They were now standing in front of the metro platform, seeing Haruko off. Kaito was also there but made himself practically invisible. It wasn’t until the train arrived that he called out to Haruko while Itsuki was distracted.

“Kitamura-san. I’ll look into it so that boy won’t disturb you further. I… may have caused you more problems. I apologize.”

Haruko looked at Kaito for a long time before answering with a smile,

“No. Leave him be. He won’t actually do anything to hurt me.”

“I just do. Don’t worry about it anymore and leave it be. I’ll settle things with him myself.”

Kaito looked away and sighed. He nodded hesitantly. It looked like he had something else to say but he stayed quiet. Haruko bowed slightly and got on the train. She waved through the glass doors as Itsuki and Kaito waved back.

The next few days were all a blur and before you knew it, it was already Friday. The literature club members were supposed to have already picked a book but Haruko still hadn’t found anything. The state of the club was in shambles. Itsuki was, for the first time, moody and annoyed at practically everything. Shun bothered her quite a bit. He never showed up to the club meetings, he disrupted the whole class by interrupting the teacher and eating cup noodles every two minutes. He also tore her backpack, by accident of course, but Itsuki wasn’t having any of it. She was cautious around Haruko, just like Kaito, she looked like she wanted to say something but couldn’t bring herself to say it.

For Haruko, she had something else on her mind. Yulan’s birthday had passed, yet he didn’t come home. She left the gift box on the coffee table near the window for him to see, but he just didn’t come back at all. Haruko was losing patience. She felt forgotten. Yulan never left for such a long period of time in the past. It was always a few days, a week maybe. Not a whole month. Blinded by her anger, she tore all of his magazines and papers. Many nights passed as Haruko lay on the floor, now filled with torn bits of paper. She hated Yulan. Back then, when she was getting bullied, she hated Yulan as well. It was the same feeling. She wanted him to give her more attention. She wanted him to acknowledge her existence but he couldn't even do that. No one could. She grabbed the gift box and threw it into the garbage. A letter near the front door caught her eye. It was the rent… the landlord always sent notices for monthly rent.

Putting her shoes on, Haruko walked down to the main lobby of the apartment complex. It was already 8pm but the landlord always stayed up late. She knew her well; the owner. It was a nice, old lady who lived on the first floor with her poodle. Clinging onto an envelope of cash, Haruko knocked on the owner’s door.

“Hello? Oh Haruko-chan! Goodness me, it’s quite late! What are you doing at this hour?”

“Yes, that handsome young man came to pay for it a few days ago.”

“Why yes, he came over to pay the rent earlier this week. Why? He didn’t come by the apartment?”

Haruko felt her face heat up. How infuriating. Why was Yulan dodging her? Paying her rent like she was some pet he was keeping in a random apartment. He wasn’t somewhere far away on a business trip. He was still here, in Tokyo. She tried to keep a straight face while saying goodnight to the landlady before stomping up the stairs. She burst open the apartment door and grabbed her very oversized jacket.

She thought to herself. Grabbing the keys, she glanced at the gift box in the garbage. She grit her teeth and grabbed the box while slamming the door. 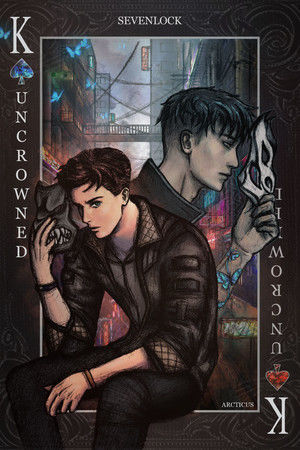