Most people don’t wake to the smell of oxidising metal doused in steam and ash. It was in this environment that Rez was born, into a twisted world that caused one both to marvel and question its existence. Bookmark here

His dark eyes reflected off the shining surface above him, seemingly sterile. It was white when most would have expected brown, but the new-born cared not. Instead, he did as any other would and screamed, or closer to a wail; the shock of existence is certainly sudden. Bookmark here

Young Rez would later discover that he was born between worlds. Most people looking into his eyes saw nothing but tar, yet they admired his pristine snow hair. He didn’t know what colour meant then. Instead, he hated those who called his beady eyes a stain. “Stupid adults… at least they work,” said Rez.Bookmark here

“Am I included in those stupid adults?”Bookmark here

“Of course not, Mum!” Finding immense displeasure in his accusation against his mother he proceeded to stare drills into the ground with great interest.Bookmark here

Rez’s Mum was immaculate, a glowing face paired with grace, painted an illusion of complete control. She glided throughout their expansive residence with ease and wonder, yet a long white dress hides many secrets. Bookmark here

Their home itself consisted of three rooms, two for sleep and one to cook, eat and live. They displayed the façade of extravagance through a grand splendour of size and show, contrasted against the empty space in the air. Bookmark here

Although a stark definer of their lives was the lack of colour. White walls, rooms, clothes and lights, the illuminated appliances deafened the senses of the luxurious family. Such that the dull off coloured food brought wonder and enjoyment to young Rez’s eyes. It was for this reason that both Rez and his father found themselves to be stains on the white tablecloth.Bookmark here

Rez contemplated that if his eyes were a stain then his Dad’s were probably… “Giant stains!”Bookmark here

“What was that darling?” Rez’s Mum must’ve experienced immense confusion at her son exclaiming about a giant stain… she decided to humour him. “What are these… giant stains you speak of?”Bookmark here

His mother chuckled lightly, “Do you want to tell your father that his eyes are two giant stains?” Rez never liked when his Mum did this… she would give off a smile more radiant than his hair, and yet there was always something sinister hiding behind it. Bookmark here

“You don’t have to, you know,” chimed in his Mum after noticing the boy’s dejected look. Rez went silent once again as he was reminded of his Mother’s status as his caretaker, parent and someone infinitely smarter than him.Bookmark here

It was at times like this that made Rez feel at home, it could be boring and tedious, but it was comforting. He loved the scent of wonder that filled the air, admiring the ‘men of purpose’ who would pass by him each day. Although he dully noted that they never shared the same interest in him.Bookmark here

Rez’s obsession with his spotless home drove him to meticulously explore every possible rabbit hole he could find, much to his parent's dismay. Even dust mites would find the goliath’s grubby hands attacking their peaceful lives. How Rez found dirt in a home that seemed to lack any form of dust was mystery his parents had yet to solve. Bookmark here

At the same time, it may be what eventually led him to find a door that was definitely not white, nor clean in any sense of the word.Bookmark here

One might wonder how Rez found the door; it was a simple plan which he had perfected over multiple attempts; all of which initially resulted in failure. Although success had finally found its way. Bookmark here

At the very beginning of his Mum’s daily nap, he escaped. Although Rez admitted that a sudden stumble downstairs both brought him to his destination accidentally, and saved him from what seemed to be inevitable capture.Bookmark here

The door ahead was withered, aged and not very good at protecting the secrets on the other side. Rez took the initiative to explore these secrets. The detective peeled away part of the obstruction blocking his way as he bumbled through the door finding himself on the other side. Bookmark here

Rez briefly sat to admire the door itself, it wasn’t particularly large in fact; not larger than any other doors he knew at least. Yet he marvelled at its stature, so grand… and so dark. Bookmark here

For the first time in Rez’s life his eyes reflected what was before him, but it was time to move on. Rez knew that he would be caught eventually and hence he made the most of his exploration.Bookmark here

What laid ahead was a cave, the bright lights within attempted to replicate the stainless shine behind him. Rez felt he was ready to explore the cave… yet his bony legs were vibrating. Denying any possibility of fear, he continued down the cave for an eternity perhaps even a day, although the mind of a child can exaggerate in these tense situations. Bookmark here

The cave itself was not notable, primarily due to the lack of illumination throughout. Most of what Rez observed was limited to the odd protruding rock shining off the light. Bookmark here

Rez found that the cave was significantly darker than before, and although he could still see his entrance it was no more than a peanut. He was also sorely disappointed at the lack of attractions to his adventure, which made him supremely bored. Bookmark here

Looking once again at the walls beside him Rez no longer saw rocks, they crept down towards him in a sludge. Noticing his sudden loss of vision Rez realised that dinner was soon, and presumably to his over exertion through exploration, he became very tired. Bookmark here

Rez was certainly not very strong, or well fed. In fact, the thin appearance of not just his parents but all throughout the white walls suggested that no one was. Attempting to turn around his frail body collapsed into a heap, impersonating a pile of sharp bones and loose skin. Bookmark here

Rez thought he had heard an alarm next to him, although he had no alarm and he had heard an explosion. Unsure as to what the sound was Rez (now rejuvenated) pathed his way back towards familiar territory. The sounds slowly became more and more aggressive as he continued his path home. Bookmark here

Climbing back through the rusted door he analysed the pristine walls around him… to find they had received a makeover. It was a colour that Rez very rarely saw. He had seen little more than the bright gleam of his walls, dull coloured food and recently his secret door.Bookmark here

The colour before him was not as bright as the walls but certainly bolder than the food, he similarly found it much less dusty and more vibrant than the door. It was a similar colour to his hands after Rez had done something stupid. To which his Mum would calmly smile at him and tell him jokes until he realised his hands were wrapped in tape. Bookmark here

The colour itself came in the form of a liquid meaning Rez had to unfortunately trudge through the substance on exit. Bookmark here

He gained a peculiar interest in the substance, unable to grasp that such a colour could exist in mass. As he climbed, he found it to be significantly thicker than water and also stained his clothes… suddenly becoming very fearful of his Mum. Bookmark here

Reaching the top of the staircase Rez found the vicious substance to be spread all throughout the white walls. A rumbling stomach reminded him to stay on track as he pathed through the corridors.Bookmark here

Along the way Rez saw one of the scholars bathing in the liquid with someone, understanding the rarity of a bath he respected the scholars’ action. Although the liquid seemed to have gone cold, and Rez much preferred warm baths. Bookmark here

He also saw someone he didn’t recognise; they were a similar colour to the door and also bathed. Bookmark here

A closer look told him that he resembled his father, defined by his coal hair and torn jacket. Rez found it funny that both men were so relaxed they fell asleep. Yet Rez happened to miss that their bodies happened to be the source of the mysterious liquid, certainly a failure for the detective. Bookmark here

Having passed multiple bathers he entered his home, although his Dad was not there, he found his Mum sleeping in her bed. Clearly, she had not gone bathing and was still taking her daily nap. Bookmark here

Although Rez’s luck then ran out as his mother awoke to find him covered in a grotesque mixture of blood and dust. Bookmark here

Rez’s Mum, Louise had encountered multiples issues within her five seconds of awakening; her home was being attacked, her son had just come back from a journey to who knows where, and her husband was probably dead in one of the corridors outside. Bookmark here

The determined mother ransacked her cupboard to find a tool only needed for the worst of emergencies. Thankfully it still fit nicely in her hand. She then swiftly moved onto her next issue, whisking her son to his bed and commanding him to stay put. Bookmark here 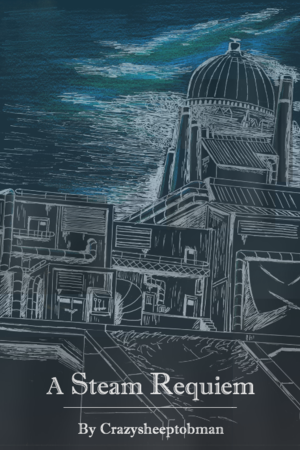