"What is a human being?"

When Utsuro muttered this, Akuta felt a twinge of nervousness inside, "Has it started again?"

It was because his brother's "bad habit" had been triggered.

In the late afternoon of a tranquil spring day, deep in the mountains, in a tiny "hidden village".

There, two boys are busily pulling out leeks, so busily that they forget to speak.

Both of them are sixteen years old, but they have never counted their own age, nor do they know it.

They don't know their birth date.

The sun was getting stronger and stronger, and the navy blue samue(Japanese working wear in old style) they were wearing was getting sweaty.

"What makes a person human?"

Utsuro's bad habit is what he calls his "speculation".

The boy loves to read philosophy books, and his hobby is to ponder over their ideas.

In his opinion, this is not a hobby, but a way to become a human being.

Utsuro and Akuta were orphans.

They had been abandoned in different places when they were babies, but the owner of this hidden village found them, picked them up, and brought them up to this point.

Both of them are carrying the harsh reality that they were abandoned by their parents.

In particular, Utsuro is unable to bear the reality of the situation and continues to blame himself,"Isn't it my fault?"

I was abandoned by my parents.

How can a human being do this?

That's right, I'm not a human being.

That's why I'm constantly asking myself questions about my existence, relying on the wisdom of philosophers and thinkers from all over the world.

Rather than thinking about it, he was fighting the urge to deny himself whenever he felt like it.

"If we assume that we are capable of overcoming ourselves..."

"The act is a humanistic activity of life..."

"It's only by continuing to do so that we can call ourselves truly human..."

Akuta then threw a leek at Utsuro, who was trapped in an endless chain of thought, using the strength of his sturdy shoulders and the snap of his arms to throw it at him like a shuriken.

With a little movement of one hand, Utsuro easily grabbed it and took it.

Even though it was only a leek, a direct hit would have at least cracked his skull.

But both Utsuro and Akuta were looking quite cool.

The rows of cedar trees were still rustling in the breeze.

The springtime sun seemed to be smiling at their gleeful "everyday life".

"Akuta, I'm in the middle of something good. Please don't get in my way."

Utsuro's face was slightly puffed up, and Akuta replied with his innate sour look.

"Let's leave the hypnosis to it. If you fall asleep in this place, you'll end up fertilizing the leeks."

In contrast to his appearance, Akuta tried to express his intentions in a soft way, but Utsuro dismissed him lightly.

Although Utsuro's habit of thinking was not new, for Akuta it was like listening to a sutra being read incessantly.

Utsuro was well aware of the fact that he had no bad intentions, but for Akuta, this was a source of great worry.

"Shall I tell you what your favorite word in the world is? It's 'human,' isn't it?"

He slowly raised his head from his crouched position and made eye contact with Akuta, who was ten centimeters shorter than his 185 centimeter tall frame.

"I can't believe you understood me that well..."

"Stop, you're making a mistake."

"It's not different, but it's different."

"What's that? It's inconsistent. Whose idea is that?"

Utsuro is not sure what Akuta's talking about.
That's why he has always suggested the danger of thinking too much.

But even though Utsuro is aware of this, he still can't stop thinking about it.

He has been through such a trauma.

Utsuro lowered his gaze and thought about something else.

"It's too difficult, your theory of humanity."

"I don't know. If I find an answer to this question, I feel like I can become human."

What kind of absurdity is this?

He believes that he is not even human.

What could he possibly be guilty of?

He could have lived a happy life.

I'm not sure what to do.

The demon that nests in his psyche tries to lead him to ruin.

How much more painful could it be?

Why do you have to suffer so much?

There's nothing wrong with you.

He made up his mind, "I have no choice."

Utsuro's face was downcast and depressed.

When he looked up, Akuta pulled his cheek to the side.

As soon as Akuta let go of his hand, Utsuro's cheeks returned to their original state, in accordance with his restorative powers.

"Don't play with me.

He took a breath and began to speak slowly, pausing for a moment.

"You know, Utsuro, we're alive, right? That's why we're human. That's good enough for me. Don't think too hard about it."

If he made one mistake, he might hurt Utsuro in the opposite direction.

But it was also a dangerous situation.

Akuta thought and thought, and made the biggest bet he could.

Utsuro tied his mouth into a knot and made a difficult face.

Akuta was so nervous that he almost broke out in a cold sweat.

"Human are difficult to understand."Bookmark here

As usual, Utsuro was pondering, but he felt his mind clearing up somewhat.

"It's a bad habit of yours to think too much about things you don't need to. You need to get my head.

When Akuta saw that Utsuro's face had loosened up, he finally smiled.

He managed to get away with it, but one thing is more than enough.

But if I don't do it, who's going to support him?

That's what I told myself.

It's not easy being a brother.

Akuta continued to laugh, trying not to let his unpleasant brother know that he was losing strength.Bookmark here 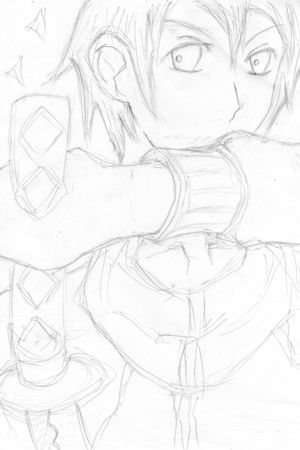