The Blood and The Number

My mother is dead. She was gone, and now she is just another number.Bookmark here

The man exclaimed, “No, no… I have to make this right! Here, I’ll fix that disgusting face for you guys!”Bookmark here

The man took my mother’s head which was shrouded in smoke and which he still had gripped to his hand and flung her through the kitchen wall, completely shattering the barrier. I remember both my face as well as my sister's as she stood back up. My younger brother shared our same nightmare, but he was now completely passed out. My father, who stood up from the rubble, ran at the man and began bashing him with his knuckles while crying. His knuckles began to crackle and bleed as he punched the man.Bookmark here

“How dare you! How could you, you bastard! Why would you do this? You monster!”Bookmark here

The man who was just taking the hits as if my father was punching a brick wall chuckled.Bookmark here

“You gotta be the worst damn father I’ve ever seen in my life. I mean, you literally let me kill your wife! In front of her own kids! And what’s this about a monster? Are you insulting me? You idiot!”Bookmark here

The man continued laughing more fiercely this time, but laughter quickly turned into anger. He snapped one of my father’s arms like a twig, and threw him across the room near my younger brother who was laying on the floor still unconscious. My father squealed in pain attempting to hold his skewed arm. That’s when the man came up with a brand new idea. Bookmark here

“Hey, I know what’ll make you a better father! What if I killed your kids right in front of you one by one? That should make you change, shouldn't it?”Bookmark here

The man walked to my insensible brother and grabbed him by his left arm pulling him to the other side of the room while my father howled.Bookmark here

Throughout this whole ordeal, I was just standing there letting everything happen. I didn’t know what to do. What could a kid do? I knew that I couldn’t stop this man. I was only a number.Bookmark here

As the man lifted my younger brother off the ground, everything seemed to move in slow motion. I can remember the grin on the man’s face as he held my innocent and injured young brother. Instantly, my brother regained consciousness as he was held in the air. My injured father was bleeding everywhere on the ground. He was begging for the man to have mercy as he crawled towards the man. One last desperate attempt. At least that’s what I’d like to think, but I know better than that. It was all futile. Bookmark here

The man winded his arm back while laughing, and the great muscles in his arm tightened and contracted as if he was getting ready to punch through an iron wall. I can remember my brother at this point. He was quiet. It was as if he knew what was going to happen, and he just accepted it. I hate that. It was as if my brother at a young age of only eleven years old was able to realize that we were all just numbers. The man wheeled and threw his punch, but not at my brother who he was holding. He punched right through my father’s stomach straight into the wooden floor as my siblings shrieked in utter panic and disbelief. The floor detonated, sending wooden chunks everywhere. I couldn’t move, I couldn’t cry, I could only watch. The man grabbed my father and flung his body casually to where my mother’s body was like he was a rag doll. Like he was just another number. Bookmark here

The man was laughing psychotically at this point with blood doused all over his white shirt. Suddenly and quickly, I could remember a red light emerging from the man’s body as he laughed. All the muscles in the man’s body seemed to slightly but noticeably grow and contract. It was like an aura of sorts. Over and over, as the red light enveloped his body, the man repeated the same thing. Bookmark here

It looked like ecstasy was taking over as he opened his mouth and laughed uncontrollably while moaning in pleasure. I remember, at this point, my sister running towards the door in tears trying to get away, but the man who was in his ecstatic and red-aura-like state saw the little girl at the corner of his eyes and rushed with speed that my eyes could barely keep up with as he grabbed her by the back of her throat with his unoccupied hand. He now held both my brother and sister. They were both being held by their throats, and my brother was beginning to once more lose consciousness. In an instant, he whipped my brother straight through the wall and hauntingly said one word right before he did so.Bookmark here

That was the end of my brother. For some reason, I couldn’t help but remember all the time my brother and I spent playing with each other as his story ended. After throwing him, the man turned from the giant opening in the wall that he just created. He was now facing my sister in a sinister-like fashion.Bookmark here

“Where were you trying to run? The fun has just begun! COME TO PAPA!”Bookmark here

I instantly closed my eyes while clenching my teeth desperately. That was the end of my sister. All I remembered was her crying coming to an abrupt end. When I opened my eyes, I saw the crimson aura once more engulfing the man almost like he collected my sister’s soul.Bookmark here

“Wow, I barely got anything from that one!”Bookmark here

As rubble from our destroyed home fell from the ceiling, I looked up from where I stood in nothingness. The man's eyes turned to meet mine. I remember looking at the man and whispering in denial.Bookmark here

“Hey, hey, hey, hold on! I have an idea! I’m still hungry! How about you kid, are you hungry?”Bookmark here

The man turned away from me and pointed at the pot of stew.Bookmark here

“Let daddy prepare some food for you! We can eat together, and then I’ll kill you!”Bookmark here

He laughed and rapidly lifted his fist as he approached me. Right when he came near me though, he stopped swiftly halting all movement and lowering his fist. His face suddenly changed. He looked around the room slowly over and over. I continued looking at him in terror but this time in bewilderment as well. He first looked at his hands, and then madly and hectically continued to peer around the room. It was as if he didn’t know where he was anymore. He then looked back at me.Bookmark here

“Hey kid, what the hell is this place? Where are we? Who are you, and why is there so much blood everywhere? Ha! Look at your face! It’s like something messed up just happened to you or something!”Bookmark here

He looked around and made expressions of disgust from gazing upon the several corpses that occupied the room. A light bulb seemed to go off in his head at this instant as he looked back at me. He raised his head and looked at me downwards with his psychotic eyes almost in a suspicious manner.Bookmark here

“Hey... kid... you didn’t... kill all these poor people... did you? I mean, I can’t lie... that would be pretty messed up! Jeez, I know I’m a number and all, but why do I always have to deal with little trouble-makers like you?”Bookmark here

He began slowly walking towards me in what seemed to be a cautious manner. It was like he thought I was responsible. Responsible for all of this. That’s when I spoke to this psychotic and disgusting man for the first time as I began to hyperventilate.Bookmark here

I rushed the man with all my might hitting him with my whole body, but I was flung back like a spring.Bookmark here

The man looked around the room once more as if he was trying to find the person guilty. He searched the room like he really wanted to find the one responsible.Bookmark here

“It couldn’t have been the father, because I mean... you know. He’s already dead, so...”Bookmark here

The man then looked to the side of my father. He was looking at my mother who was half-sticking out of the house. Bookmark here

“And I mean... look at that thing over there! I think it might be missing something important! I mean seriously, what the hell is going on over here! What happened? What did you do?”Bookmark here

I had no words. I felt like I was going to pass out from this nightmare. I wanted to pass out.Bookmark here

“I mean... I couldn’t do this! All of this is just messed up! Even I have standards for god’s sake! I mean look kid!”Bookmark here

The man pointed at his bulging right shoulder and approached me like he was about to end me.Bookmark here

The next thing I knew, instantaneously and without warning, a steel object which appeared to look like a dagger flew from the opening in the house’s wall, but this man seemed to easily notice it coming. He just stood still and flexed his abdomen awaiting the impact. The dagger completely shattered upon impact. It was like the dagger was made out of glass. As it shattered everywhere, a piece of the dagger flew at me and stabbed my left bicep which began to bleed a considerable amount. I tried to immediately take the piece out, but I couldn’t. The shard was too deep. I looked up in pain alongside the number just to hear a man confidently yell from outside the house.Bookmark here

“Come on out number. I know you’re in there.”Bookmark here

The man who murdered my family turned from me and stepped forward out of the house utilizing the house’s opening that he created. The man smiled like he was just given a new toy.Bookmark here

“Oh man! What do we have here?”Bookmark here

The mysterious man far outside from the house’s opening quickly stretched out and threw his right arm to the side with no hesitation. He had his hand open like he was waiting for something. He grabbed onto the air as if he was gripping it when all of a sudden a giant weapon appeared out of thin air and right into his grip. The weapon seemed to be a jet-black great-sword larger than any weapon I’ve ever seen. The man swung the giant weapon onto his shoulder and smiled.Bookmark here

“Wow. Number One huh? I’ve really hit the jackpot this time. I wonder... what kind of weapon... will I gain from killing you?”Bookmark here 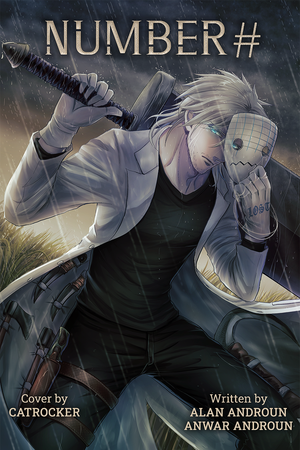