Pain so intense that it was more excruciating than death. As though his heart was being ripped straight out of his chest. Bookmark here

It was the only feeling pulsating through his body as he swung his pike, a pole-like weapon with a sharp iron tip. Bookmark here

He was in pain not because someone was inflicting damage upon him. Rather, it was the opposite. He was the one slaying them. Bookmark here

With each swing of his arm, thousands of people collapse in his peripheral vision. Blood splatters onto his body, onto his face. He doesn’t bother to wipe it away. It serves as a reminder of this terrible sin, of what he is doing to these people, to this country. Bookmark here

He wants to cry, he wants to scream.Bookmark here

But he doesn’t make a sound, because there was no one to hear his silent screams anyway. Everyone around him were long gone, their minds overtaken by the drug that destroyed one’s senses and gave raw power in return. Bookmark here

He just wants to stop…but he can’t. He can’t until he finishes his duty to protect his country. Even if it brought harm to others. Bookmark here

Why did he have to do this? That’s right…it’s because he’s the only who’s still sane in this world. It’s so unfair. He just wants to stop hurting others. He continues his one-sided attack, his heart twisting each time he brings his arm down again. Bookmark here 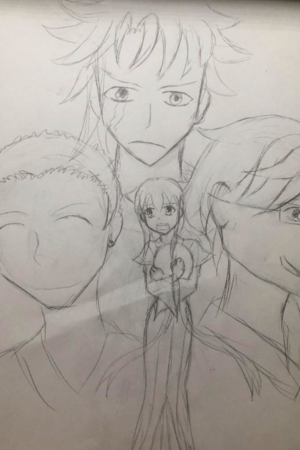