Gwyn groaned as the alarm suddenly began to belt his ears. It was the latest pop song; from some band, he would never bother listening to if his radio station alarm didn't play it. He quickly, or as soon as he could after just waking up, rolled over and shut the alarm off.Bookmark here

Then, he laid in his bed for several minutes before finally sitting up. He sat still for a few moments longer until he finally swung his legs out and pushed himself up. Gwyn slumped across his room to an old dresser. It was beaten and worn after many years of use, but he thought it had looked quite lovely in his youth.Bookmark here

He pulled open a drawer. It was more of a sudden jerk. Several items fell off the dresser—a textbook, an old running trophy, some cheap knockoff figure of a character, and a pamphlet for his school. He chuckled to himself. He had not meant to, but in the last few weeks, he had knocked everything that sat on the dresser to the floor. He stared down at the pile of junk. It would be a simple matter to pick it up, he would rather have the stuff in its proper place, yet he once again pulled out some worn clothes and left the room.Bookmark here

'I don't have the energy now' is the excuse he echoed through his mind as he slid on an acceptable enough shirt and pants.Bookmark here

Without stopping his walk, he grabbed a prepared cup of hot coffee from its machine and slumped to the door of his apartment. His relatively short walk to school was about to begin, but he realized he had forgotten his phone as he exited the place.Bookmark here

Gwyn let his head fall as he walked back into the apartment to retrieve it. Once he had his phone in hand, he could finally start his day.Bookmark here

The sun warmed his skin, and a gentle breeze swept through his golden-red hair. He smiled, though it was a small smile, as he sipped his coffee. The morning struggle had passed, and he was starting to feel like he could enjoy his day. The surrounding area of his apartment was various shades of grey buildings and sidewalks, with the occasional small half-dead tree placed here or there.Bookmark here

He took another sip of his coffee and pulled out his phone. A text had come through at some point. His mother was asking if he wanted to come down to see the rest of his family over the weekend.Bookmark here

Gwyn made an audible 'hmm,' as he thought. It was loud enough for a passerby to hear, and they turned to look at him, though he paid no mind to them.Bookmark here

After a moment of thought, Gwyn typed his response.Bookmark here

He was not sure if he would be busy. The idea of seeing some family he hadn't seen in a while seemed pleasant as well. Gwyn wasn't sure what he wanted to do, but he sent the text all the same.Bookmark here

He shrugged to himself. The weekend was a couple of days away, and he could always change his mind later.Bookmark here

As he continued his walk to school, Gwyn swiped on his phone. He stopped at a crosswalk and looked up. An old lady was making her way across the street. She was hunched and used a cane with every step she took. He looked up at the light; it indicated not to cross.Bookmark here

'Crazy old woman,' he thought to himself as the lady continued to make her way across the street. He decided to ignore it and lifted his cup of coffee to take another sip.Bookmark here

Loud honking caught the attention of Gwyn and the old lady. They turned in the direction of the sound. A large semi greeted them with more honking as it barreled down the street. Gwyn thought the whole thing odd for a moment, but it quickly became clear that the truck was not going to stop.Bookmark here

His phone and coffee smacked against the ground as he sprinted out into the street. The truck seemed to honk more intensely as Gwyn began his charge.Bookmark here

As quickly as he could, the young man scooped up the old woman. She was surprisingly light. He continued his sprint forward without missing a beat. A second slower, and he might have been too late. A misstep, and he would have fallen. But Gwyn didn't worry about the possibilities as the truck continued its charge behind his back. He let the old lady down to her feet.Bookmark here

The truck continued its out-of-control rush into the distance. The news would later circulate that a truck had sped through several intersections after the brakes had mysteriously gone out.Bookmark here

"Thank you, sonny. I could have been in a real pickle there," the old woman said with a slight cackle.Bookmark here

"Don't mention it," Gwyn said as he looked for more traffic. When he saw none, he ran across the street to retrieve his phone. It had a large crack across the screen, and his coffee was beginning to form a small stream that drained into the sewer. He sighed and slid the likely broken phone into his pocket.Bookmark here

Gwyn picked up the now empty cup. He shook his head and took a step forward back to the street.Bookmark here

It was at that moment he noticed the old woman standing directly in front of him. She had thin grey hair, a long misshapen nose, and her smile showed that she was missing a few teeth. She was short, about half the height of Gwyn, though she might have stood taller if not for her hunched posture. Her eyes were a vivid green, and they stared at Gwyn with surprising ferocity. As if she was sizing him up for some odd reason.Bookmark here

"How?" Gwyn suddenly yelled as he stumbled back. He had thought he left the woman on the other side of the street.Bookmark here

"Tell me, sonny, where are you going on this fine day?"Bookmark here

"Just to class," Gwyn shook his head to forget the strange moment before. He hadn't had enough coffee yet, is what he settled on to explain her sudden appearance in front of him.Bookmark here

"Class? Ah, a student. What are you studying?"Bookmark here

"Why history, my boy?"Bookmark here

"Started in electrical engineering, but I didn't like it. I was already going for the history minor, so I just decided to switch it. I'm just trying to finish with a degree of some kind at this point," Gwyn rattled off his usual response.Bookmark here

"How interesting, say have you ever considered going on an adventure?"Bookmark here

Gwyn closed his eyes for a moment. He had no idea what the old woman was thinking, but he just wanted to excuse himself politely. He opened them back up and looked to the old woman who eagerly awaited his reply.Bookmark here

"I'm sorry, but I have to run. I might be late for my class."Bookmark here

"Well, I'm glad that we were fated to meet this day. You saved my life, sonny!"Bookmark here

"Glad to hear it, but as I said, I think I might be late if I don't go now." The crosswalk light switched to indicate that he could cross. He did not wait a second longer and broke out into a sprint. Gwyn made as friendly of a wave as he could as he ran to his class.Bookmark here

"Have a fun adventure, eh!" the old woman yelled back, but Gwyn was already too far away to hear her. Bookmark here 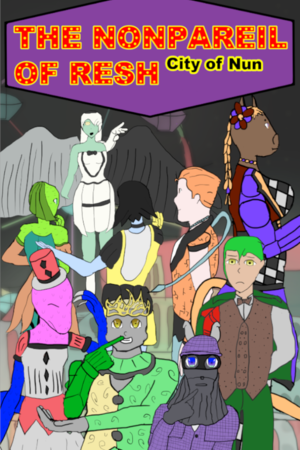