As the crimson Moon showed itself from the clouds illuminating the land even in the depths of the wilderness where a guy wearing White robe that been stain by a dark red colored liquid nailing in the ground, fidgeting something.

His entire body was covered with wounds, and near him there's a sword pointed in the ground. as he's moving his right hand making a simbol using the crimson colored liquid that coming from his wounds-

"Ugh" a blood vomit from his mouth.

in his surrounding there's many dead body's wearing armory scattered everywhere, along with blood's stain in the trees and uncount sword's scattered and pointed everywhere.

"Ugh—Hha,hha" the guy are getting difficulty to breath along with blood came out from his mouth, as he continues what his doing.

After a second he stopped, then raised his head stared at the crimson moon, then spoke.

"Ohh! i Alex van astria- His words stop as he try to catch his breath "one of the title holder as hero and current owner of the holy sword arcran and the first son of the lxx king of astria kingdom, king Vidcent van astria and queen Leonora. Call you, as I Willing to sell my soul and body to who may appear now, answer my call! sacrificial pact, magic—!"

The time really stopped after he shout, as the leaves that falling from the trees in his surroundings stopped in mid-air. then the symbol that he painted in the ground began to burn. but, the fired color was different, it's not the same bright orange but its black—time returns as the leaves that stop in the mid-air start to fall, furthermore the black fire has been extinguished and a hot steam flowing through the air can be seen.

After a second. the hot steam subsided and a man with black haired appeared in front of the guy.

The man was looking down so that causes to the guy wearing white robe to not see his face.

"Hha-hha...who might you be?" the guy asks the man in front of him while trying to catch his breathing.

The man raised his head and looked straight into the guy eyes. Their eye's lock, the guy wearing white robe showed a little frightened expression for what he saw.

red as blood with black dot in the middle that is what the guy sees when their eye's lock.

"You may know what the consequences about this"

"Yes—Ugh" the guy answer along with the blood stream from his mouth "just Fulfill….this pact and my d'isere"

A silence for a second. the man didn't respond to the guy'd answered, instead he keep staring at the guy eyes.

"Ugh" the blood continues to stream to the guy's mouth along from His wounds. but he'd just ignore it and stared to the man in return to his gaze waiting for the response-

"Then" the response that the guy waiting came out "I'll inherit that desire of you, to protect that someone. in exchange I'll devour you."

"Yes, I don't mind being in the abyss for eternity" the guy respond

"caw! caw! caw!" A cry of a thousand crows can be heard everywhere in the wilderness after that response from the man with red-eye's with black dot in the middle. 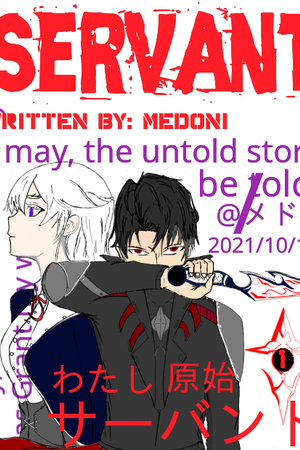