The double doors slammed up against the walls.

The two men in bleach, white lab coats entered a small, dim room. At the center of the room was a surgical light surrounded by hospital curtains.

"Eddie, we don't have much time. We need to get this done before we lose her," exclaimed a firm-faced man, the tails of his lab coat trailing behind him. His partner, a bushy-eyebrowed, bald man, wheeled a patient on a gurney, as he followed alongside.

Eddie parked the gurney under the surgical light and scrambled over to join the firm-faced man who was already snapping on gloves and a surgical mask. "Dr. Nakamura...uhh... Dairou. Just stop and consider for a second the ramifications if you do this," Eddie pleaded as he fumbled with his gloves. "You have seen what happened to the tests done on the other subjects. What could possibly make you think this time will be any different?"

Dr. Nakamura glanced at Eddie from behind his glasses, a puff fog formed on the lenses. Then he turned to face the room's large computer monitor. "Drones — on."

Immediately, four small drones mounted on hovering disks rose like little UFOs from the sides of the computer screen. The drones all lit up with blue lights and began to fly to different points in the room; One drone accompanied Dr. Nakamura, the other three focused on the patient.

"If we do this. You know what they will do to us for stealing from them. T-they will send the Reaper after us," Eddie said under his breath as he hooked the patient up to a heart monitor. "Are you ready for—"

Dr. Nakamura shot a glare in Eddie's direction, but slowly his expression softened. "Of course I am ready to accept the consequences. As far as I’m concerned the public already sees me as a terrorist," he said as he began punching numbers on a keypad which was followed by a buzz. A safe on the wall slid open and Dr. Nakamura proceeded to gently retrieve a glass cylinder containing a clear purple liquid from the compartment. “Everything I have done up until this point was to save this town, but now it's too late. Eddie… help me this one last time… I need to at least save her.”

Eddie gave Dairou a doubtful look then shook his head. "So you modified it?" Eddie asked as he returned to working on the patient.

"Yes. I diluted this sample with her blood. Unlike the pure stuff from the artifact this is coded specifically to her," Dr. Nakamura replied as he motioned to the patient, a young, pale girl with black hair. "We already know it reanimates dead tissue. The test they did on the town representative’s daughter last year proves that."

"It doesn't prove anything, Dairou. That girl turned into a mo-n-ster. What makes you think it will be any different? If it doesn’t kill her you are going to wish she were dead."

Dr. Nakamura cleared his throat. "The Ira cells have matured to their final form already. They shouldn't mutate her. Only live in her bloodstream and repair the nerve tissue the virus destroyed." He inserted the cylinder into a slot on a large machine and twisted it until it locked in place. "At least that's what I hope," Dr. Nakamura sighed. "Are we almost ready to begin?"

"Sigh... just have to connect one more tube."

Dr. Nakamura nodded in affirmation and began typing on a holographic keyboard. In response, the ominous machine began to close around the glass cylinder as it rumbled to life. The doctor started flipping switches in sequence causing blue lights to illuminate all over the machine. A line of text appeared on the computer monitor - ALL CHECKS COMPLETE. SYSTEM READY.

"Eddie… they don’t suspect you and you haven’t been infected. If she survives this... I need you to sneak  her past security and get her off the island."

Eddie frowned from behind his mask. “Where do you want me to take her? Is there anyone left that still trusts you?”

“Take her to Takashi. He will take care of-”

The girl twitched on the bed snapping both men back to attention. “We need to start now,” Dairou said.

“I hope you are ready,” Eddie said. “Because once you press that button there is nooooo going back."

With grim eyes, the doctor stared at the girl on the gurney. Her small frame, strapped down with belts, moving ever so slightly with her shallow breaths. Four tubes ran from her limbs into the sinister machine. Nakamura cursed himself in his mind but he knew what he had to do.

As tears welled up in his eyes, Dr. Nakamura typed a command on the keyboard causing a button on the virtual control console to begin slowly blinking. The word on the button read in clear text: START.

Purple fluid began to flood out of the machine and into the tubes creeping its way towards the girl on the gurney. The ooze entered her limbs dying her veins a tint of light purple.

The girl's body jolted; her muscles tensed and twitched in protest. The fluid flowed through her body as she jerked only to be held down by the straps that bound her to the bed. Her pulsating veins began to glow as her body thrashed about.

Sweat drops began to pool on Eddie's balding head as he stared in horror as the girl let out a blood-chilling scream that filled the entire room. Panicked, Eddie looked to Dairou who's glasses gleamed against the surgical light, masking his expression.

"I don't think she can take much more of this! Shut it down!" Eddie pleaded.

"If we stop now we will end up losing her anyway," Nakamura responded from the control console. "Give it a few more seconds!"

Those "few seconds" felt like hours in Eddie's mind. He turned away, unable to stomach the horrid scene any longer.

The girl fell silent. Her small body became still like a doll. Her veins ceased to glow as the last bit of liquid slipped into her wrists leaving her skin once again pale. However—

Doctor Nakamura killed the alarm on the heart monitor.

"So t-thats it then… Eddie, can you get a blanket," Dr. Nakamura asked as he slowly entered commands on the holopad. The machine shut down leaving the room in complete silence.

"Yeah... sure... no problem." Eddie's voice was hoarse. His knees knocked together as he staggered to the cabinets. His grip slipped causing him to nearly drop the now unfolded blanket he pulled from the cabinet. When he returned to the girl's bedside Dairou was already unbelting her limbs. Eddie covered her deathly still torso with the blanket, then he looked doubtfully at Dairou.

Doctor Nakamura leaned in closer to the girl and began to whisper. "I-I’m sorry Miyabi..." He stifled a sob. “I-I d-did everything I could-”

The girl's eyes flashed open revealing a dark purple-red hue swirling in her irises. Those eyes stared at Dairou with a burning intensity. 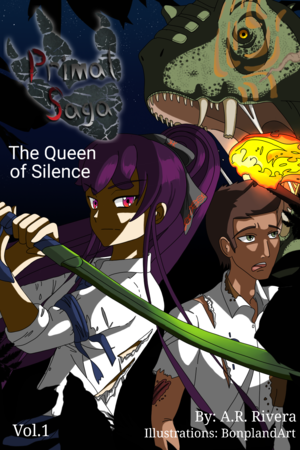