Is it possible to have an ideal school life?

I walked out of the classroom along with Shinosuke. I noticed Shinosuke walking inside his classroom instead of coming with me to look at the clubs. I couldn't help but ask
"Hey! Are you not coming with me? "Bookmark here

"Huh? Me? Haha as if! Do you really think a veteran like me will join these normies in their clubs, I'm out of here Kenji, good luck finding a club!", And with that, he ran away inside the classroom.
Bookmark here

"Tch.. that coward Otaku", And I decided that it will be better if I don't waste my time and look for a suitable club.Bookmark here

It wasn't like there weren't any decent clubs at this school, after all, it was a prestigious school but for some reason, my past as a weirdo was coming to haunt me. The first club I saw was the occult club, it was filled with nerds that were obsessed with ghosts and magic. It reminded me of the chunibyo of my middle school who used to pretend they were some sort of sorcerers and demons.
Bookmark here

I also came across the anime club, at first I thought it's an art club but then I saw the anime otakus throwing Kamehameha wave(Dragonball reference) at each other. I decided that it would be better if I leave before they notice me.
Bookmark here

I somehow managed to escape from the anime club without being noticed but then I heard an argument in the hallway. The argument was about club and it piqued my interest, a rare argument in this well-disciplined school was worthy of my time indeed. I noticed that the argument was between a girl who looked around my age and an upperclassman. Bookmark here

"Hey, can you please give me some more time, I promise I will have this club up and ready by end of this week!", said the upperclassman.Bookmark here

"Isn't that what you said last week and the week before, you've been saying this for a while, the student council president is losing his patience now. This cannot continue anymore!  We are now planning our budget for clubs and some clubs don't conduct any activities but take up the money from the budget, that's not the way President wants to run the school."

"No more time for you, we have given you enough time, besides it doesn't look like you've had success in finding a single member for the club" Bookmark here

"That's not true, I have found a few members, I just haven't registered them yet but I promise I'll have them here soon"Bookmark here

"I must say you don't sound very convincing right now. Just because you're an upperclassman doesn't mean I will just allow you to get away with it senpai. " Bookmark here

The upperclassman was a bespectacled man with pale skin, unkempt raven hair and of average height for a second-year high school student. The girl was rather beautiful of above-average height and with strawberry blonde hair and blue eyes. She had a scowl on her face as it seemed that she was reprimanding him and seemed to have the upper hand as the upperclassman struggled to counter her arguments.  The upperclassman didn't sound very convincing, even I could see through his lies, but I also realized that it would be better for me to sneak out of here before I am noticed by the upperclassman as I had no intention of getting involved in all of this. As I turned my back and was about to take my leave, a voice called me out and as expected, it was the upperclassman.

"Hey!, come here! I have been waiting for you, where have you been? "

I wanted to leave but was already noticed by the upperclassman, I also felt kind of bad for him so I didn't want to just run away from there and leave him behind to deal with the girl. I couldn't speak and word and was dragged into the mess.
"Umm. I...", I stuttered.
"Never mind, as you can see this is one of my club members, I'll show you more so are you convinced that I am making progress?"  he said confidently.Bookmark here

"But I ...", I was struggling to speak, I had two contradicting thoughts in my mind, I wanted senpai to save his club and at the same time, I didn't want to get dragged in the mud. But I wanted to resolve this situation as soon as possible. Bookmark here

"Two days, just give us two days and we will show you why you shouldn't disband this club!", I said aggressively.

She was taken aback for a second at my sudden outburst.

"Umm. well... fine. I will talk to the President about it. I cannot guarantee it but you will not have much time. Whatever you're trying, it's better if you do it as soon as possible otherwise your club will be disbanded.", she said as she walked away from there.

I took a sigh of relief. But then I realized that I might have bitten more than I can chew. I had no choice but to help this senpai now.

"Oh by the way, do you know how we're going to find three more members in two days?"

"What??? What are we going to do now?? My club, I will not be able to save this club. I thought you had something in mind when you said that!!!",  he moaned as he expressed his annoyance at the fact that we had simply delayed the inevitable.

"Hey calm down! Your club is going to be disbanded anyway. There's nothing I can do now. I have simply bought you some time. Now I'll take my leave. "

"Hey c'mon don't leave me like this. Please save me, you've bought me some time, can you also find me some members? How about bringing some of your friends? "Bookmark here

"I don't have any friends apart from one otaku who is more likely to repel students away from the club," I said with a disgusted look on my face. Bookmark here

"Looks like somebody's talking about me", he said and continued playing on his Gameboy.Bookmark here

*Back to the scene*

It was rather annoying to see an upperclassman act like that. I wanted to run away but I too had become part of this mess somehow.

"I will think of something, now I'm involved in this too. I have no choice now. Meet me here after school. " And that was the end of lunch break and I had to rush towards my high school. It was going to be difficult but I now had to resolve this mess. It might just be what I needed or it might become a disaster. 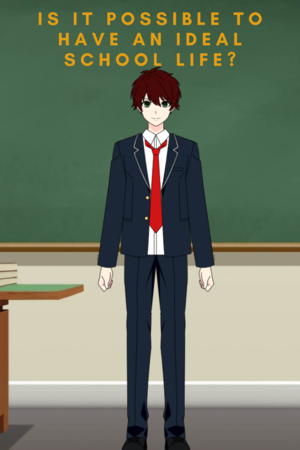 Is it possible to have an ideal school life?