My first thought was that I could take her. If she tried to handcuff me or arrest me or run away to look for help, I could easily tackle her to the ground.

She was shorter than me and looked like a wimp, so whatever she was going to say next about the corpse behind me didn’t matter.

I know that was a shitty thing to think about, but I can’t help that my mind went there immediately.

Still, if I could avoid confronting her altogether...well, I’d rather do that.

I was starting to come up with some bullshit excuse, but she interrupted me promptly, still pointing to my side. Her hand was trembling a little.

“Why...Why do you have the Alice Spade pendant?”

I followed the exact spot her finger was pointing to with my eyes, slowly tilting my head downwards.

The gaudy pendant I took from my sister and quickly stuffed into my pocket was hanging out from it carelessly, shining with the sunlight.

I don’t even remember when I put it there. Must have been after this girl called out to me and scared the shit out of me. Even so, now that my head was looking down at my pocket, I took the chance to take a quick glance behind me to where Alice’s corpse was.

I don’t know why I did it, but something compelled me to. And what I saw scared me more than when I first saw her unmoving body on the kitchen floor.

Her body wasn’t there anymore.

The rabbit girl was going through something of her own, but I couldn’t let her see me sweat over my own distress.

I turned to her again, clutching my fist to keep myself from freaking out. I forced myself to take out the pendant from my pocket, showing it to her.

She quickly approached me and took it from me, examining it from every angle.

“It’s...It’s the real thing! B-But that makes no sense…I gave it to Alice. I told her she shouldn’t let anyone else see it or give it to anyone…She promised...”

While she looked at that thing and talked to herself, I turned around to face the ground where Alice had been, kneeling down and patting it all over. The plants she landed on had traces of being pressed, so it definitely wasn’t my imagination.

She was here. That pendant was proof, too.

My frantic reaction finally caught the girl’s attention, who lowered the pendant and looked at me with concern.

I stopped in my tracks.

I turned around to look up at her and frowned, shaking my head.

That was the best I could come up with at that moment. She didn’t like it.

I could see she was struggling to stay calm, too.

“Allen, please, I know this means nothing to you, but it’s very important to me and everyone in Wonderland. The Alice Spade has to have this.”

“...And that Alice Spade…is definitely my sister.”

The girl nodded. I sighed and stood up, rubbing the back of my neck.

The girl’s big eyes pierced at me through her glasses.

I was determined to tell her the truth, but...that hopeful look on her face disarmed me more than I thought.

And, to be fair, I was a villain. But she didn’t need to know.

Instead, I averted my eyes, and took a pause before continuing.

The girl looked at me with confusion—or at least, I think she did.

I was still not able to look at her.

I felt guilty over my words, even though technically I wasn’t lying. My sister was gone, and I had no idea what the hell had happened to her.

There was a brief moment of silence before she finally spoke.

I looked at her, and I thought of that last argument I had with my sister.

I tried to think of the exact moment when I killed her, but nothing came to mind. Something wasn’t right. It feels like that’s something every killer must think about. I must have locked it in my memories somewhere.

Because I knew deep down that Alice didn’t deserve to die.

I knew it, but my petty sibling rivalry with her and my pride would never let me admit it.

She was a bad sister to me, but to this girl she was clearly a friend.

The girl was startled at my question. I guess because I didn’t show much interest in her at first.

I still felt like this wasn’t real, but I had been an asshole to her long enough.

I gave her a moment to compose herself and answer.

Her face immediately went beet red. She almost dropped the pendant, juggling it to keep it from slipping down her nervous, jittery hands.

“Relax. I just want to know if you’re friends.”

“O-Of course we are! Alice called me her friend many times! That’s why I can’t believe she’d just disappear! She...She promised to meet me here when she was ready and she’d never break her promise!”

Her earnest reply confirmed that it wouldn’t be easy to just tell her the whole truth.

I took a deep breath.

I averted my eyes away from her once more as I gathered my thoughts and weaved my words carefully.

“I...followed her into the woods, then we both fell into a hole on the ground, and next thing I know, I woke up here.”

She brought a hand to her lips, blinking those big eyes at me.

“And you’re sure she fell in with you? She didn’t stay up there?”

I shook my head.

Zuria looked lost in thought, and a little concerned.

“...Allen. Listen to me. No one can know Alice is missing. If the other Spades find out—no, if anyone in Wonderland finds out that our hero from another world is missing, it’ll be utter chaos!”

“Yeah, yeah. I know. I ain’t telling anyone. Hell, I haven’t even seen another person around at all. Just tell me how to go back to my world and I’ll be out of your sight before I accidentally spill the beans to the next bunny I meet, yeah?”

She looked at me with something I can only describe as...pity. 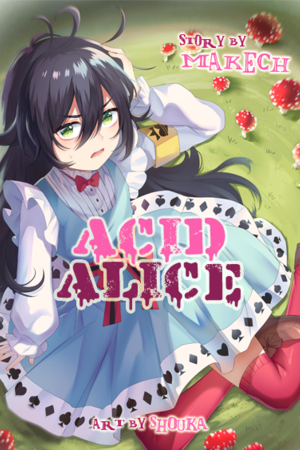