I am now Santa Claus and must defend the North Pole

Christmas, the most happy time of the year.
Behind it is a massive industry managed by Santa Claus who is also known as Father Christmas and Saint Nicholas.
He is based in the North Pole in Antarctica but what about South Antarctica?
No one knows this because of the world wide alliance which has kept this continent's history hidden away in the realm of darkness.
The south is where the wild goblins, elves and other creatures live.
Santa Claus was sick of living in a constant violent so he brought together all the kind creatures of their races and they all settled in the north.
This was the original Santa Claus but he was just a man and so he died.
However he had a magical power no one else had, his body would revert 50 years earlier and another person from some other country who died when he did would now enter his body.
And so Santa Claus survived for hundreds of years and the North Pole became a good place.
One of the Santa Clause eventually made factories and wanted to give happiness to others so he devised a plan.
A plan to go into the other nations of the world and gives presents to all the good people.
He knew who was good thanks to the elves and their magic.
The reindeers could fly for a long time so they were chosen to pull Santa and all the presents.
But not just any reindeer was good enough, only the best could do this world wide tour so 9 of the best reindeers were chosen.
Everything went well and this was repeated year after year on the same date, December 25.
Only one day otherwise he would be found and evil men would come after him.
Then one year something changed.

Santa Claus came back from a successful Chrismas tour and there he found elves laying in the snow.
What are they doing he thought.
When he went to see what was happening he saw them, they were dead.
He could not believe it but it was true, dozens of elves dead laying in the snow.
Santa was shaken, what could have happened.
As he pondered, smoke can be seen farther off.
He hopped on the sleigh and rode off.
One of the toy factories was on fire.
A horrible fire as smoke poured out of it like you wouldn't believe.
Is everyone okay? Santa thought but then he sees people outside, thank goodness.
But it wasn't like that, all of them were also dead.
Hundreds of people this time were dead, all slashed or beaten to death.
What is happening?!
Santa keeps riding further on to head to his home, the central headquarters of the North Pole.
On the way there he sees the culprits, a giant army of goblins, orcs, elves, dark elves and other beasts.
They are the ones in the South Pole, an invasion? this can't be.
The building was not yet breached so Santa landed there, all those gentle workers were now fighting for their lives.
Anything being used as a weapon, they had no guns since everything was peaceful for a long time.
The only good thing about this situation is that the invaders also do not have guns or it would be even worse than it is now.
The orcs with their huge clubs of wood or metal are unstoppable as they clubber to death elves and good goblins in mass.
STOP STOP
They do not listen, this is now total war, on Christmas no less.
Santa Claus falls down and sits in despair as the chaos continues against the people who are unprepared, how could this happen, he wallows in grief.

As Santa Claus is in shock and sadness the front entrances are breached.
Big orcs and fast goblins soar into the place and death is all around.
The little lady elves who greet you each morning, dead.
The goblin workers who love a good drink, dead.
The cute rabbits and animals, dead.
The building passed down through the ages, destroyed to pieces.
Santa can't stop here though he finally thinks, he gets up and runs to the main vault.
All the most important documents are there, they must be protected from this assault.
CHRISTMAS AND SANTA CLAUS WILL LIVE
I cannot let this body be mangled and ruin the procession of Santa Claus, I was but a mere worker before I died but I know.
I know the importance of Christmas.
Everything is grabbed and put into bags, Santa hops onto his sleigh and heads away.
Keep fighting everyone, go up the floors and keep them at bay from above.
Santa will return and we will win.
The south's forces see Santa head off, they split up and start marching toward him.
Their goal is Santa Claus no doubt, dead he must be for Chrismas to fall. 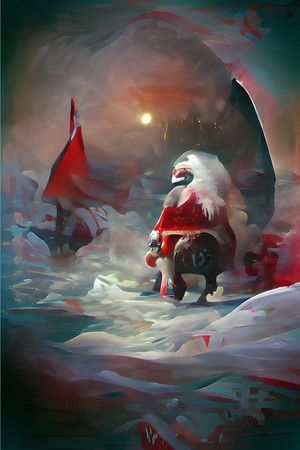 I am now Santa Claus and must defend the North Pole