Tonight is a moonless night. The dark sky has only twinkling stars to illuminate the heavens.

As usual, the night market has a countless buzzing variety of stalls. Some stalls sell street foods. Some sell weapons and tools. Some sell books, medicines, and magical items. And some sell cosmetic products.

And in just a split second, everyone in the street turns their head to stare at a certain man who is more or less in his early twenties. He barely catches his breath as he runs as if his life depends on it. The night is chilly however, droplets of sweat are visible on the perfectly chiseled features of his face. The hems of his robe by his chest are also drenched in sweat but this only added to his overwhelming charisma - giving off a wet look.

This man can be described as beautiful rather than handsome.

Delicate rather than sturdy. Like a small flower that is extremely fragile to the breeze and rain.

This man is strenuous rather than graceful.

His long black hair in braid sways in his every movement. His wide and long sleeves flap in the air that almost look like a pair of wings.

Well... that is because not lesser than ten ladies are running after him.

"Is he a cultivator?"

"Look! Aren't those ladies members of the emperor's harem?"

"You're right! I know some of them. They're indeed the emperor's concubines!"

Some widen their eyes in amusement. Some raised one of their eyebrows. Some snickered. And some didn't really care but this man just caught their attention.

He wants to let out a deep sigh. Unfortunately, he even barely catches his breath so he can't do so.

In his mind, thoughts of regret and sorrow flooded.

He lowered his long eyelashes as he unconsciously scratched his cheekbone with his forefinger out of anxiety, almost touching the small mole under his left eye. "Why am I born too gorgeous? If being born good-looking is a sin, can I still attain my salvation?"

As a scholar, he isn't a stranger to literary works. In fact, one of his hobbies is writing a poem. He was so good at it that even in a critical moment like this, he can still construct one.

That they seek as they wake

It is not possible to ignore this beau

For this one's smile is a poison to you

Full of thorns that cause gloom

This one's eyes, my alluring eyes

You shall not fall onto me

For I cannot repay thee

The man can't help himself from smirking. He's just too proud of his 'skill'. This man indeed mastered the art of praising himself. He thought, he's not only good-looking, but he's also witty. That makes him a beauty with a brain. He can't help but whisper to himself, "Ha! I'm a real package deal!"

This man's name is Xu Zhengming. At the age of 23, he already lost the count of his ex-lovers. Sometimes he's loyal, most of the time two-timer if not three. He's not even a loyal customer in just one brothel. Almost all the prostitutes know him as a celebrity.

Well, Mingming isn't bad-looking at all. He's a classical counterpart of the modern era's heart-throb Casanova. A sweet-talker, a goddamn poet. He mastered all types of women. Thus, hitting into one is not a complicated matter to him. He knows what pleases and upsets a woman depending on her 'classification'.

Even though he got this kind of reputation he actually graduated as an imperial scholar.

Because his family isn't that well-off, he got a weak connection to those in the palace. Thus, despite getting this rank in the imperial exam, it was hard for him to set a foot inside the imperial palace. He's been unemployed until yesterday.

Today was his official first day as a eunuch. And on his very first day, he wants to quit his job for good.

"There he is! Catch him!" An imperial guard yelled not too far away.

His fellow guards nod and also run after him together with the emperor's concubines.

"Ah, what the hell? I am not into men!" Xu Zhengming exclaims.

The truth is, he really wants to make his first day as a eunuch a memorable one. But for some 'cruel' reasons, in an instant, he doesn't want to become one anymore.

He took the ways where there are a lot of people, trying to blend in. But it seems like the world is against him and the gods up in the heavens despise him for being so good-looking. His gorgeous self can't blend in with common folks! His beauty is of a peerless kind. Too out of this world. No matter how he pushes himself deeper in the crowd, it's always like he is in the spotlight.

Along the way, he can't avoid bumping into people from time to time.

"Watch where you are going!"

"Oh my, what a handsome face!"

Xu Zhengming's ears rang when he heard a high-pitched voice of a maiden. To him, it sounds sweet like rain in the desert.

He made an effort to turn his head to the maiden and gives her a wink and a mischievous smile. He said while still trying to get away, "I'll catch up to you later, young miss!"

He got the chance to witness how her smooth white face goes red as she smiles bashfully.

"Let me through. Sorry! Excuse me!"

Not only the ones after him are getting closer, but worse is also that the crowd is blocking his way and he finds it difficult to pass by. The concubines and guards are catching up with him.

"Don't chase me! I'm leaving the palace!" He yells at them at the top of his lungs but still, the ones after him didn't stop.

Realizing they kept on running after him, he changed his strategy. He kept his head low and made a turn into a dark alley.

He runs in a pitch-dark narrow street.

He barely can see what's ahead of him. What can he only see clearly is the starry night sky.

"Where did he go?" A voice that belongs to a man dominated the noisy crowd.

Another voice of a man sounded but it's not as loud as the first man who spoke. "We lost sight of him! Squad leader, we better go in different places."

When the imperial guards finally went different ways, as well as the members of the emperor's concubines, Xu Zhengming is finally able to let out a sigh of relief.

After catching his breath, he stamped his foot and gritted his teeth.

"Ha! If I have known this beforehand, I would not have dreamed of becoming a eunuch. I---"

He didn't have the chance to continue complaining. Out of nowhere, a hand pushed him onto the cold, hard wall. The force is a bit too much and the impact made him groan. Before he could even react, another hand covered his lips.

He thought, "Wait, am I getting robbed? I am planning to quit my job and there's no way I'd earn money for the meantime!"

His quick response didn't fail him. He tried to free himself from the ill-intended person in front of him. Unfortunately, this person is stronger than Mingming and only tightens the hold as he tries to struggle.

Knowing he's not going anywhere, he changed his tactics and bites the person's hand. Sure, this is an effective way. The person immediately withdraws his hand.

He took this as an advantage and calls for help.

"Tsk." The person clicked the tongue as if very much annoyed.

This person quickly captured Xu Zhengming's wrists with both hands and pinned them to the wall.

The next thing he knows, something soft touched his lips.

"Mmmppff!!" But the more he avoids his lips on the soft thing, the harder it pressed. And it's becoming moist too.

His eyes curved upwards and his lips slightly stretched into a smirk.

Xu Zhengming started to respond to the kiss. Yes, our protagonist is being bold.

The other didn't expect this and froze in an instant. This person's hands turn cold but still firmly holding Mingming's wrists.

Then loud and heavy footsteps echoed in the alley. "Right here?" A man said, most probably an imperial guard.

"Yes, I heard a voice earlier." Said the other.

The guard tried to look at the narrow alley but saw nothing but darkness. "Seems no one is there though. Let's try searching over there."

Then the two guards headed in another direction.

Meanwhile, Xu Zhengming is now on fire. His eyes closed, feeling the affection. The warm sensation of the passionate kiss melted his heart. Though this person's lips are a little dry than those of the ladies who he kissed, he didn't give it much thought.

However, the feeling is not mutual to the other.

As soon as the guards left, the other let go of Xu Zhengming's wrists and quickly pushed him to the side.

He almost lost his balance because of the force. Good thing, he managed to regain his balance after stepping backward twice.

Xu Zhengming, "Aren't you too strong for a lady? Are you perhaps a cultivator?"

The other said nothing. They are somehow distant from the busy street and so the noise from the crowd is not too loud. In fact, their breathing and the sound of rustling sound of loose clothing can be heard.

Then a red flame ignited in the top portion of a talisman in the stranger's hand, giving off a bright light similar to that of a candle.

With this, Xu Zhengming can trace the other's built under a lame brown cloak, covering the upper part of the face with its hood. The stranger's long ink-black hair is loose.

"My lady, y-you sure have nice muscles." This lady is bigger than the slender Xu Zhengming.

Did he hear it right? He thinks he heard a husky voice. But how could it be?

The stranger took his cloak down, revealing a pair of obsidian black phoenix eyes. His sword-like eyebrows knitted, creating a wrinkle in between. He has a pointy nose and thin lips. Mingming would not deny it, this person is a man with good looks but will never admit that this man is as good-looking as him.

He leans closer to Xu Zhengming's face, putting his hand against the wall for support. He then said, almost whispering, "Why are my concubines after you?"

Mingming's eyes bulged as he stares at the face of this person in commoner's clothing who claims that the ladies after him were his concubines. He indeed looks like someone he just saw in the palace!

It really seems that this unfortunate protagonist, Xu Zhengming is hated by his ancestors and the heavenly beings. Just how bad his fate could be? He just sexually harassed someone, not knowing that this person is the emperor of the imperial palace! 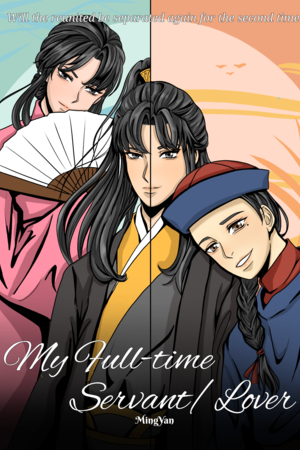