It was about eleven in the morning when I got off my flight. I wore a beanie to cover up my feline ears, and despite it being summer, no one seemed to notice. Then again, I also noticed many others with similar traits, which I hadn’t seen before. People with tails like mine, people with fur, people with claws. Most everyone had been affected in one way or another.

I wheeled my suitcase up the stairwell one step at a time, begging it to move. When, about halfway up the stairwell, it decided to stop moving, I threw it onto the empty escalator beside me and hopped over its railing. I rode it the rest of the way up to the level with the baggage claim.

I stood in front of the baggage claim for a while, mesmerized by all the colors of the bags that passed. I was so mesmerized, in fact, I missed my own bag and had to run around after it. I bumped into a few people along the way, but my profuse apologies apparently made up for it. I walked up to the sliding doors and took in a breath of fresh air. I’d finally made it back.

I pulled out my phone and swiped to my messaging app. My most recent message was ‘in baggage claim’, so I realized I had missed my relative. I ran back inside to the stale air and looked around. I found her in front of aisle four- her dark hair and olive complexion contrasted with the rest of the travelers passing by.

“Maya!” I shouted. She turned around and ran towards me. She’d gotten bigger since I’d last seen her, but not by much. I could still pick her up with ease. She jumped on me, and I had to drop my bags to balance myself. “Hey, hey! Watch it, I got bags an’ stuff!”

“I thought I would never see you again,” Maya told me, arms wrapped around my waist. “And with the virus, I just never believed you would…”

“Well, I’m here now, eh? Whaddya say we go pick up some food on the way back?” I laughed. It’d been more than three years since I’d been in Ohio, but the last time I came home, our parents drove us to a local fast food chain. I recalled Niko vomiting afterwards.

Maya smirked. “Aubrey, they shut many of the city diners down because of the virus and never reopened them,” she explained to me. “It is the same with many places nearby. Serpho is not the same as it was.”

“That’s a shame, now ain’t it?” I pouted. “Welp. Guess we’ll hafta find somethin’ else that works for us.” I began to walk to the doors again, then realized I didn’t have my bags and turned around to pick them up. “Where’s the car?”

“Long-wrecked. I walked here from the new apartment. It is a very short walk, so do not worry,” she replied, flicking up her shades. Her eyes were hazel to match her skin. I couldn’t see any signs of the virus on her- I wondered whether she had even contracted it.

I followed her out the doors and along the sidewalk. “So what all happened here? Virus wasn’t nice, probably. How’s rehab goin’?” I pounded Maya with questions on our way to the apartment.

“A lot, Aubrey. Too much to explain now. Rehabilitation is going quite well. Many people who once would not have are now allowing themselves to be vaccinated. The risk of the virus was too high for them, I suppose,” she answered. We approached the large apartment complex and walked into the main lobby. Maya took a short detour to grab herself a bottle of water.

“How old’re you now, eleven?” I asked. She confirmed this with a nod. “Wow. Gotten real tall, I tell ya. Betcha you’ll be taller ‘n mom and dad!”

“I doubt that highly. Statistics show I will only be slightly above the mean height,” Maya pointed out.

“Jeez, I was just tryna give you a compliment.”

We got in the elevator, and Maya clicked the button for the fifth floor. I was tempted to rub my arm over all of them, but that would be an awful first impression. When the elevator doors opened up, I found Maya walking backwards, and I got tripped up.

“It’s one a’ these ones?” I asked her, turning around and waking out. The elevator had two pairs of doors, and each side granted quick access to a different portion of the complex. She never replied to my question, but by then, I had already figured the answer out myself.

Maya swiped her keycard over one of the doors, and it unlatched. She pushed down on the handle and opened it up. When I looked inside, I thought I was looking at a hotel room. It was quite fancy, with a nice view of the nearby forest. I’d play in those woods with my brother when I was a kid, when there wasn’t boarding school or a virus to worry about.

She put a finger to her lips to warn me- my grandmother was sleeping on the couch. “We have a guest bedroom if you would like to stay. I know you will be heading back to your school soon, but for now, it will work,” she whispered, leading me quietly to a room with a twin-sized mattress. “You always used to say-”

“I’m a twin, so I’m the only one allowed ta sleep on these,” I finished her line.

“Hey, speakin’ a’ twins. Where’s Niko at? Haven’t seen ‘im in, like, years, and he stopped respondin’ to my letters. Is he doin’ alright?” I asked her. Her smile turned into a reminiscent frown. “What? What’s the matta’?”

“I am sure you know about the virus. He-” Before she could continue, a flood of thoughts filled my head. ‘Oh my God, is Niko dead?’ ‘What the hell happened?’ ‘Why wasn’t I here for them?’ ‘Where is everyone?’

“He is not dead, Aubrey. At least, as far as I am aware. I last contacted him in June, so it may be outdated, but he should still be alive. In fact, I might know exactly where.”

“Where?” I spat. I wanted to know what had happened to my brother.

Maya put a finger to her chin, something she had a tendency of doing when she contemplated. “Off of I-480, next to the large laboratory building. I believe it is called Nock Laboratories. If you drive there and look for the busted rail nearby, he should be near it.”

“No, no. He is in the forest next to the Labs. And that busted rail is what crashed the car. Chad was not paying attention and crashed us into a tree nearby. I wonder if it has fallen yet,” she pondered. I was still rampant in my own confusion.

Maya swallowed. “Chad is dead, Aubrey. Benji, too. Both for reasons unrelated to the car crash.”

“What?!” I shrieked, falling to my knees. Maya put her finger to her lips again, but I wasn’t in for it this time. “Chad and Benji are dead?! That’s not- I don’t-”

“The virus. At least, that is what everyone says. I know what really happened.”

“Chloe. She was driven insane by the pain the virus brought about. She… for lack of a better word, she murdered them. There is more, but I will not elaborate for your sake,” she told me. I swiped at my eyes and pinched the bridge of my nose. I couldn’t believe what she was telling me. If I had been here sooner, would everyone have…

I looked up. “What happened to Tori and John?”

Maya sighed. “We thought they died. As it appears, they voluntarily entered a quarantine camp to maintain access to food and water. Tori is two months pregnant,” she described. “I am aware that all of this is hard to hear. If you need to spend a few days recovering, I understand.”

“I’mma go find Niko right now. He’s the only one left, ain’t he? I- I gotta go make sure he’s alive,” I decided. “He probably doesn’t even care ‘bout me anymore, but I gotta… I gotta…”

Maya opened a drawer on the dresser nearby and plucked something out of it. She then handed it to me. It was an envelope. “Niko would not forget about you, Aubrey.”

“He wrote me… a letter? Even when he was- he was dealin’ with that?” I whispered.

“More than a letter,” Maya said. She reached into the drawer and pulled out a massive stack of slips of paper, envelopes, and sticky notes. “He wrote to you nearly every day we were in those woods.” I broke into tears. “Perhaps you should read some after you seek him out.”

“Mm-hmm,” I replied through sniffles. “You should c-come along with me, Maya.”

“I cannot. Though there is now a cure, it would not bode well for me to come in contact with the virus again. You had to be vaccinated to fly here, so you alone should go,” she reasoned. I nodded my head and headed out the door.

I looked back at her before I left. “Thanks, Maya.”

It took me a little while to find the Laboratory among the other tall buildings. I had no car, so I simply walked along the edge of the interstate to get there. Eventually, I found it- with the massive ‘NL’ logo above, it had to be the building I was looking for. I nearly walked to its parking lot before remembering what Maya had said about the busted rail. As I continued, sure enough, I found it. There was a splintered tree and skid tracks along the dirt. I knew this was what she’d been talking about.

I walked through the rails and into the woods. I remembered the woods, but I’d never been in this section before. As I walked along the edge of the Labs, I found dent marks in the wall. There must have been some sort of fight there. By sheer luck, I caught sight of a distant plume of smoke. A campfire was burning. I began to run over, but stopped. Suddenly, I couldn’t move my leg. I yanked at it and realized it was caught in a snare.

Just then, I heard the sound of a branch creaking behind me, and light footsteps landing on the dirt. I whipped around to find a boy in a hood. His clothing was patchwork, his pants were torn, and he had a beige scarf around his neck. A tail flicked behind his legs, and feline ears poked out of holes cut in his hood.

I stared at him in wonder. I could see the same shocked expression in his bright green eyes. Blonde hair poked out from his hood, one side worn flat, the other in a braid, just like I wore mine. His skin was pale as ever, and gauze covered his bloody wounds. I knew who he was the moment I locked eyes with him. I shivered, and tears started welling up again. Here he was, enduring everything I hadn’t known until now.

I reached out and called his name. 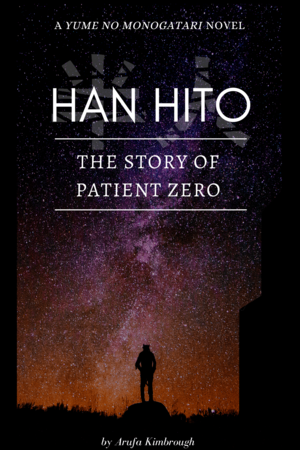