A thud against the balcony door jolted [male protagonist] from the bed. Pulling up his joggers he went to investigate, but not before grabbing the first "hitty" thing within his reach. A yaoi paddle. [Male protagonist] wasn't sure if this weapon would beat an intruder into submission, or whether it would kill him first from embarrassment. For clarity, it wasn't even [male protagonist]'s property to begin with, but a forgotten souvenir. It belonged to his female best friend, left drunkenly in his room after their last convention together before she moved away. He had thought about mailing it to her, but if the post clerk or courier dared ask what was inside, he knew he couldn't answer truthfully. Nor could he think of a good lie if they decided to open it up for inspection.

Puffing out his chest in an effort to appear intimidating despite his weapon, he tried to convince himself that it definitely wasn't a home intruder. It was likely a bird that had flown into the glass. Or the stray cat he had been feeding was becoming impatient for his next tin of tuna. The empty multi-pack wrapper had been sitting in his cupboard since he had started saving for the visual novel. Next month kitty. Hang in there!

Having been lost in his thoughts, his feet had taken him to the boundary between his bedroom and his living room. Crossing the threshold, he dramatically flicked on the light switch. The lights flickered on, then off, on, then off, before settling to on. In any other home, [male protagonist] would be concerned, but he had been meaning to contact building management to look at that for months now. He tensed his jaw, and with his puffed-out chest, conjured himself to be an intimidating foe.

His jaw slackened almost immediately as the thin fabric revealed a silhouette that had anxiety clawing down his throat. Nor did it dull the surprise as he pulled back the curtains and the figure came into view. The silhouette hadn't been bird-shaped. Or cat-shaped. Maybe he was hoping it was three cats in a trenchcoat, coming to mug him of all foodstuffs that contained fish. That would have been less suspicious than the silhouette of an average proportioned human, no cat ears or trench coat billowing in sight. For some reason unknown to himself, which later he would call fate, he slid open the door.

From under the hooded figure, pink eyes glinted at him before a pair of arms threw themselves around [male protagonist]. The soft mounds against his now deflated chest didn't feel like a stab wound, trying to incapacitate him so they could steal what belongings of his they felt would be of value. In fact, he felt pretty much intact. His suspicions of the mounds were confirmed when the hood fell away from the intruder's face, that the person clinging onto him was a girl, revealing purple hair which tickled against his collarbone. He discretely tried to get a scent of the girl, but the musky cold air clung onto her clothes and skin.

Purple hair? Check. Pink eyes? Check. Could the cosplayer have stalked him from earlier? He couldn't tell from her smell. What's that one thing that people always forget? Fan artists and merchandise manufacturers alike? The beauty mark under her right eye. Check. Definitely not the cosplayer. Could it be? Before his mind could make a full connection, his heart stopped in his chest.

She looked up and gave him that smile. That smile he was so used to seeing.

"[Ideal waifu]?" he just managed to get her name out of his mouth.

"That's me" she replied, still giving him that smile. Still looking up at him with those eyes.

That's all it took for his heart to start beating again. The rough pounding against his chest as concern gripped him, the instinct to check her over thoroughly to find the source of the pain. His awareness made him notice everything about her. The strands of her hair and her clothing were lightly dusted in grey specks. A small red bump was forming on her forehead. When he pushed her back a little, his grip light on her shoulders, he could see her jeans had ripped at the knees, the skin underneath grazed. They looked red and angry, gritty with the everyday debris that covers a balcony.

What he found standing on his balcony was not what he was expecting. Nor was he expecting her to be THIS cute! He wanted to brush his hand through the strands of her hair that smelt of lavender and some other flower he couldn't place. He wanted to cup her chin with his broad him, warming it from the cold. He wanted to kiss the bump on her forehead as if that would make the pain would go away. He wanted to tell her everything would be okay and all her wounds wouldn't hurt anymore. But there was no way he was that smooth. Instead, he panicked. His ideal waifu was standing right in front of him, smiling, but she was obviously injured! 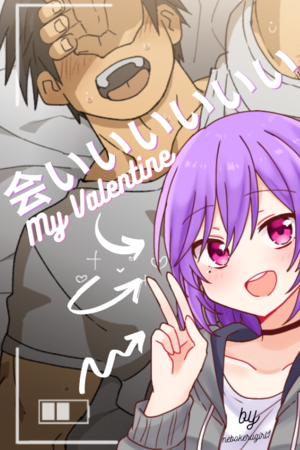