PROLOGUE: THE CROSSING TOWARDS CHERFLAMMEN

The Demon Saint is Missing, so I Ran Away to Another World Vol. 11

***The border crossing of Chersea-Cherflammen***Bookmark here

“Spread out! Block all the possible exits! Don’t let him escape!”Bookmark here

“Our scouts are reporting a person heading north to the to the crossing! Hurry with the pursuit!”Bookmark here

An entire battalion of paladin guards, backed by a formidable force of knights hailing from the kingdoms of Nerfes and Amaranth, dispersed across the huge forests of Chersea’s northern regions. They were also joined by cavalry units from the League of Valley Cities. Their target: the man known as the Human Saint’s champion and favorite, the Commoner General, Lord Kuro of Arles.Bookmark here

No, he did nothing to offend Her Holiness. Rather, it was the opposite—she wanted to do something with him. And so, after the Lord Kuro lost his memories from a ‘nullifying potion accident’, he was forced to escape with the help of his friends. A couple of months of running away and evading parties meant to capture him, the pursuit for the Lord Kuro ended at the crossing of Chersea-Cherflammen border.Bookmark here

Meanwhile, as there were no formal request from the Holy Palatial Gardens for their help, the demon soldiers of the border guard contingents from Cherflammen just stood watching from their positions. Their eyes never left the columns of dust and smoke, whipped by the paladins and knights combing the vast forest tracts a few distances away from them.Bookmark here

“What do you think is happening with the humans?” a demon guard asked his companion. The ruckus caused by the pursuit parties made the border outpost uneasy; after all, humans and demons had a bad history together.Bookmark here

“Well, our captain did not like it, so I guess it’s something bad,” the other demon answered.Bookmark here

“If you’re curious, the man they call the Commoner General is missing!”Bookmark here

The two sentries jumped in surprise; they didn’t expect to hear the voice of their captain, the commander of that outpost, behind them. Turning around, they saw him approach.Bookmark here

“Boss,” the first demon said, “do the humans have to call an entire army just to search for him?”Bookmark here

“Well, rumors are about that the Commoner General is the Human Saint’s lover,” the commander smirked. “With a human lady such as her, it’s obvious that she won’t let go of her property.”Bookmark here

“You know, slaves. These barbarians love keeping slaves; that’s why they invented marriage. I heard that it’s for tying down a person to their side forever.”Bookmark here

“Hii!!!” the second demon shrieked. “I’m glad that I was born a demon, a noble race, and not to a human mother!”Bookmark here

“You sure are!” their captain patted their backs, “In any case, keep the guard up. We never know if these ‘pursuits’ are really ‘pursuits’ and not reconnaissance missions.”Bookmark here

“Got that, boss!” the demon sentries returned to their duties at once.Bookmark here

It’s been a week (I think) after I last saw Lady Madelaine and my other friends at the Holy Palatial Gardens.Bookmark here

After that ‘weird’ episode with Her Holiness, Lady Noir cast a spell on me that ‘threw’ me off to somewhere. I landed in some place resembling a wilderness, populated only by yellow grass and rolling hills. I didn’t know where I was; there was no one to talk to, nor ask for directions. My demon friend told me to run, and so I ran. The green grasses, and blue, snow-capped mountains that characterized Chersea’s geography lay behind me. To my front was a vast nothingness…though my reasons were telling me that I shouldn’t venture into that place, my instincts kept on bugging me to stay far away from the Holy Palatial Gardens.Bookmark here

Whether or not that decision is foolish, I cannot tell. Still, I took my first steps into the unknown.Bookmark here

For a while, I just walked. I had no way to tell what time or day it was, for the sun in Chersea’s sky never set. Nor did I have an hourglass in which the Cherseans referred to for time. Still, I trudged forward, occasionally looking back, and silently reflecting on my judgment. Maybe part of my choice was influenced by that terrifying change in Lady Madelaine. I mean, whenever I reminisced at that event, all I could remember was Her Holiness’ sadness, and anger. It’s as if she would kill everyone who got in her way. The question in my mind was, what for?Bookmark here

I don’t know how long I walked until I noticed I was tired. The Chersean landscape changed a little; it got a bit smaller when I looked back. The sun was bright, yet the wind was cool, suitable for long walks, or hikes. Maybe it’s also the reason behind why I didn’t get exhausted until now. I checked on myself, I was neither hungry nor thirsty. If there’s anything I was feeling at the moment, it’s the overwhelming sleepiness.Bookmark here

The sky was clear; no sign of dark clouds, even from the distance—save for that weird ‘weather’ from where Lady Madelaine was. It was also stationary, so at least, I’m confident that I would wake up as dry as I fell asleep. From where I was, I could see the black pillar and peals of lightning that seemed to shoot through the heavens, and darkened the immediate regions around it. It’s impossible for any people—at least, from my spot—to miss that horrifying event. Nevertheless, while it was scary when I was near, from here, it was only a remote danger…something that I could ignore.Bookmark here

And so I slept. Yes, in that open wilderness. I didn’t even try to look for some sort of small outcrops for shelter; the uninterrupted view of the scenery before me already revealed that I would only fail in my attempt.Bookmark here

Then, when I woke up, the gloomy weather from Lady Madelaine’s transformation eventually dissipated.Bookmark here

At that moment, I thought the problem was gone; that the Human Saint had finally regained her senses and stopped her wrath. But I was mistaken. As I attempted to retrace my steps back into Chersea and the Holy Palatial Gardens, someone appeared at the horizon. A small lady, with her horse in full gallop towards my direction, soon stopped and alighted before me. Her face was covered, and the black hood that she wore gave an impression that she’s there for something important, not to make friends.Bookmark here

The lady took a quick bow, said something incomprehensible, and fished something from her sack. It was a matchlock pistol, some round bullets, and black powder in three bottles. She also gave me a dagger, and a note, sealed by the royal signet ring of the Queen of Cherwind, Lady Ursura. Then, she gestured for me to read it, which I did…it was a letter written in my native tongue, Filipino.Bookmark here

At the back of the letter was a hand-drawn map, presumably of Cherflammen. I saw the map of Chersea and Cherwind before, and it was nothing like it. Because I only had basic knowledge of Chersea’s language, I asked the lady in broken Chersean, “Cherflammen, where?”Bookmark here

She gestured to me, as if asking whether or not I could ride a horse. I told her I could, though, I’m a bit hesitant to ride holding her. Nevertheless, the lady insisted and pulled me up in one lift…inadvertently revealing a white fox-tail inside her cloak.Bookmark here

She put her index finger on her lips, asking me to stay silent. I don’t know why she did that; we’re alone in this vast, empty expanse of golden-yellow grass and rolling hills. Then, the lady grabbed my arms and put those around her waist, gesturing to me that I tightened my hold. Well, I guess this was no time to get awkward and embarrassed; one bad fall, and I could paralyzed myself. So I did what she suggested, and off we go to the borders of the Chersea-Cherflammen.Bookmark here 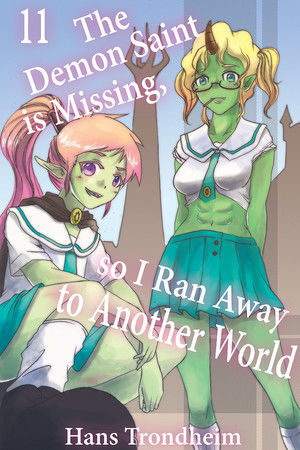 The Demon Saint is Missing, so I Ran Away to Another World Vol. 11