Chapter 1: The Siblings That Stay Together, Play Together

The day Phantasia launched, stores worldwide were sold out of the game within a single day. Two siblings had managed to get a copy of the game and the hardware to play. Both of them had played many games together and decided to try out the newest MMORPG for fun. Once they had created their characters and input their player names, the two of them found themselves at the starting town.

“I could say the same for you, Mariya.”

“This is pretty cool though. I feel like I’m actually in the game.”

Without warning, Mariya punched Wolfy in the face. He could feel the pain in his jaw as he held his jaw.

“Wow, I can actually feel that. This game is impressive,” Wolfy said, forgetting that he had just been punched in the face.

Mariya gently embraced her brother with a hug.

“Never say that again or I’ll punch you. You’re beautiful.”

Wolfy stopped for a second and placed his hand on his sister’s head.

“Now, let’s get to doing the quest and earning money. Then we can go shopping and buy cute clothes for the both of us!”

Wolfy twirled around and struck a cute pose bearing a small fang from the left side of his mouth.

“You read the basic rules of the game in the startup guide, right?” Mariya asked she figured out how to check the status menu.

For a few minutes, Mariya struggled to figure out to open the menu. She had played many MMORPGs but this was the first that reacted to her movements and not a controller. Wolfy waved his hand to the right, bringing up his status menu.

“Unlike you, I actually read the manual, sis.”

“At least I actually have a degree.”

“I was teasing. Don’t worry, nii-nii, you have a degree in my book. You worked so hard and I’m always impressed at all the knowledge you know.”

“You realise I don’t remember most of what’s in those books, right?”

“Quiet. Let me be impressed.”

After getting a solid understanding of the game’s mechanics, Mariya and Wolfy made their way to the nearest shop and proceeded to sell off their starting equipment and buy slightly better gear that help them.

“So, what class are you? Witch?” Wolfy asked as he took note of his sister’s gear and weapon.

“It said I was a Magical Girl Witch. What about you?”

“Said I was a Shape-shifter. Guess I’ll be able to become a wolf at some point.”

“Wolfy is fitting for you then. You can be my attack wolf.”

“Well, I am pretty protective of you. Even if I couldn’t be in the real world.”

“It’s okay. Now you can be amazing and protect me while I protect you,” Mariya said with a smile.

Once the two of them had bought the gear and supplies they needed, they made their way through the town for the first dungeon that was of the lowest level. Unlike other MMORPGs, dungeons scaled to the highest levelled player in the party – plus or minus a few levels. This meant that even the most beginner dungeon could be danger for even a high-ranked player.

“This game allows for guilds, right?” Mariya asked as the two of them walked the main road.

“Yeah. There are guild boost and such. For example, the sooner we create a guild, the better it would be for us. There is a level requirement minimum for creating a guild. One of us would need to be level ten. After that though we could create a guild and add members if we want them.”

The hours had passed until Wolfy and Mariya found themselves rising through the levels. Both of them had reached level ten and headed for one of the main guild building in the nearby major cities. Every big city had a guild hall at the centre of the city that housed all the guilds in one building, each of them separated into different rooms.

“So, what should we name guild?”

“How do you feel about Ideasthesia?”

“It does have nice ring to it.”

With the creation of their guild, Ideasthesia, the two of them continued to increase their levels through different dungeons. By the end of nine hours, both of them had increased in level. Wolfy took notice of the in-game clock and what time it was as he turned to Mariya.

“You should probably get to sleep, sis. It’s getting late.”

“You don’t plan on sleeping, do you?”

Mariya placed her hands on her hips and glared at Wolfy with eyes that told him she was not happy.

“Nii… Is that the only Spanish phrase you know?”

“I got it from an episode of—”

“I need to teach you Spanish one day,” Mariya said with a smile.

Before Wolfy could speak, he noticed three men approaching from behind, all dressed in low-level gear yet walking as if they were of noble descent. Stepping in ahead of his sister, he stared at the three men as they stopped in front of them. The man leading the other two appeared calm and smiled in a non-threatening manner.

“You two look like you could use a party? What do you say to forming one with us?”

“Sorry but the two of us have already formed a guild. Thank you though for the offer,” Mariya said with a calm smile.

“Are you sure don’t want to join us? We could help each other out. Your friend could join as well.”

“My brother and I aren’t interested but thank you. Now, gentlemen, if you don’t mind, could you bother someone else?”

“B-Brother? But he… Right, I guess this is a roleplaying game. Well, if you change your mind. Please feel free to contact me. I’ll send you a friend request.”

Mariya continued to smile as the men started to walk away. Placing her hand on her brother’s shoulder, she deleted the request the man had given her.

Waving her hand to the right and pulling up the menu, Mariya navigated to the logout menu and pressed the button in hopes of logging out from the world. At the press of the button however nothing happened. Another press started to lead to worry in her mind.

Wolfy navigated to the logout button and pressed it six times.

In that moment, Mariya and Wolfy noticed a blue stream of light in the sky. A voice that was deep in tone but calm began to speak – his voice echoing throughout the world.

“Greetings to all the players that have bought this game. I hope you have enjoyed your time here. It is my duty to inform all of you that you cannot logout. You are all trapped in my world and unlike other games where you can revive after death, you will die and your bodies will die in real life.”

The voice continued to speak of his plan and the different players that had died throughout the hours. Once everything was said and done, Mariya looked over to her brother – the fear showing in her face as clear as day.

Embracing his sister gently, Wolfy comforted her to the best of his ability.

“I mean, we’re if we’re truly trapped in a video game then it’s easy to live in. Let’s go gather some supplies and keep levelling up.”

“But if we’re not care then we could die.”

“It’s no different then the real world. The only difference is it’s easier to live in this world.”

“So, living in a video game is easier for you?”

Wolfy brought up the map of the world and took note of the position they were at.

“We can travel the world and raise our level. Together, we can become the strongest players in the game.”

“If you have my back, I’ll always have your back.”

“So, where should we start?” 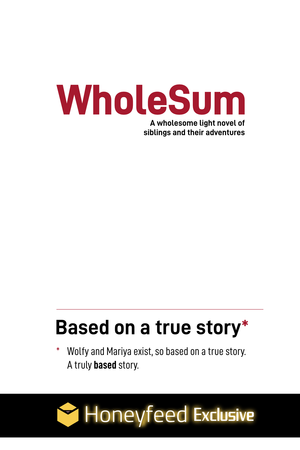