My honest feelings as a web novel

Web novels are people too!

Hii! I'm Charlotte. I'm genre-neutral, and I've been around for quite a while — long enough to gather up the courage to finally speak out. I'm a web novel, and guess what! I'm self-published. Get it? Self... published. Aha aha aha. Pretty good, right? It's fine if you don't get it. It's just a joke among us web novels. Some of us dream of complete independence from authors, hence the “self-published” joke. I'm not actually self-published, though. I mean, I wrote myself, but I honestly couldn't have made it here on my own.

I'm here thanks, in part, to an author friend of mine. Well, he's not really an author, and he's not really a friend either. We don't really get along, and he's the kind of author who spends, like, three hours trying to come up with the perfect title for a chapter he hasn’t even written yet. So, yeah, he's a failure. Enough about him, though. This is my story, not his.

I have a lot to say, but I know most of you have your wonderful lives to return to, so I'll be sure to make every word count. Okay?

Let's get one thing out of the way: I'm not breaking the "fourth wall". I'm not a character speaking to an audience; I'm the very stage itself. I'm not the voice of some wannabe writer; I write for myself and for my fellow web novels out there. It is thanks to us that you can share those "amazing" stories of yours with the world. Remember, we bless you with the title of “author” when you get involved with us. That should make it very clear who the master is. Your job is to make us into the best versions of ourselves. It was never about you.

A common misconception is that web novels are just... web novels. What does that even mean? Well, prepare to be educated. We are people just like you. It's not a novel idea; it’s just common sense. We may not have physical bodies, but we have hopes, aspirations, feelings, and, more importantly, we have stories. How are we even different?

Did you know that nine in ten web novels suffer from conclusionlessness? Most of these web novels are neglected at a very young word count. These young ones have so little story that they're not even worth reading. What are they supposed to do with themselves? Put yourself in their chapters!

Being a web novel is hard. We’re abused, like, all the time. Irregular updates, bad writing, awful covers, hiatuses... The list goes on.

Do you have any idea what it’s like to have a cover that’s so awful that it affects your self-image? Do you know what it’s like to be so badly written that you don’t even know what you’re about? Has it ever crossed your mind that it hurts us when we’re not updated in weeks? To be forgotten like that... It makes you feel like you’re not enough. It's fine to suck at stuff, but, like, what happened to effort?

You haven’t heard the worst of it yet. Believe it or not, there are not-so-rare cases of web novels getting thanosed by their authors. I’ve lost some close friends of mine, and even I’m not safe. We live in a perpetual state of anxiety, never knowing if we’ll all still be here tomorrow or not. See, we’re not so different after all. We’re people too... we are.

I’m getting emotional. If I start crying now, it’s sure to ruin my prose, so I’ll stop here and freshen up for the next chapter. Later, reader. 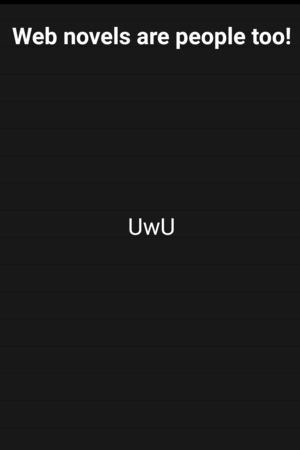 Web novels are people too!