As the battleship docked at the port, a red haired girl leaped from the ship and landed at the ground. The girl was smiling at first but..

"Ow. My back. Oww. My back," the girl massaged her back and stretched her body.

"Captain of the Battleship Aquamarine, Houshou Marine. Glad to meet you, Captain. I'm Yuzuki Choco, the secretary and adviser of Resistance Leader. You can call me Choco." Choco shook her hand.

"Ehehe, nice to meet you. Well, call me Marine instead," Marine scratched her head. She then turned her attention to Aqua.

"At your service, my Supreme Leader," she bowed to Aqua.

"Don't call me that, I ain't from Star Wars. Just Aqua," Aqua then observed the ship.

"You know, we should continue this inside the ship." Aqua suggested.

When they entered the ship, Aqua was greeted by the ship's crew. Based on her observation, the ship can fit 3,000 people. From inside the ship, Marine presented the ship's specialties. Tough armor, suppressing secondary battery, impenetrable anti-air defenses and other features that could outperform other battleships.

"Well, we could say that this ship is our trump card," Choco stated.

"Marine. You, your crew, and your ship are now accepted to be a part of the Resistance Army." Aqua declared which made the entire crew celebrate.

Marine hugged Aqua, "Thank you for this opportunity. When do we start?"

"We start at dawn in Aomori Prefecture. We should first ensure the safety of our equipment while landing, understood?" She announced

"Don't call me Supreme Leader," she facepalmed and grinned, "Aomori, here we go."

Pekora rushed to the command center, "Where did they started their attack?"

One of the personnel replied, "Aomori Prefecture."

"They occupied 50% of Aomori. Government wasn't prepared for the invasion, that's why they haven't deployed a majority of their troops," the personnel stated.

"Just as I expected. The government was fooled by the Resistance Army. That's why they had an easy time invading." Pekora responded.

"Good. We have more allies now- oh wait, Nagasaki? That's dark." Moona sat on a chair near the door.

Pekora let out a deep sigh and sat on the nearby chair, 'I'll handle another army? I'm tired,'' she thought.

Moona sat beside Pekora and patted her shoulder, "I think I can manage our Nagasaki forces."

"Why did you accepted the Minister's request without having any experience then? Don't worry about me. Worry about yourself," Moona hugged Pekora and patted her back, "We're partners, remember?"

Pekora hugged back, "You're right." She then went beside one of the computers, "I should contact Botan."

Moona smiled and murmured, "You can still grow up and handle everything....

"Good. Do you want to be deployed on Nagasaki Base?" Pekora asked from the other line.

"No, I'm good. I have my own base right under my restaurant."

"I don't know about that, but okay. Well, another request. Can you hire more members? Like those people who's capable of fighting or some other stuff?"

"I'll help you," Moona can be heard from the line.

"Okay, then," Botan accepted the request.

Botan sighed as she heard a lot of people panicking outside her restaurant. She went into the kitchen and opened a door that led to the basement.

"Guess I can finally use this."

"Hello Aomori," Aqua said as she set foot on the ground.

The army started positioning their artillery cannons and started firing.

"Get down!" Marine exclaimed as she saw an enemy soldier 100 meters rushing towards their location. One of her crew threw a musket at her.

"You're down," she whispered as she shot the enemy in the head.

"We should find a safe building here." Choco then glanced at Aqua, "You okay?"

After 5 minutes, one of her soldiers reported back, "That hotel is clear. No person inside and safe from enemy artillery."

"Let's take cover then. How about your ship, Senchou?" Aqua looked at Marine.

"Don't worry, my crew will handle it. It will help our artillery cannons in clearing areas- wait, did you call me Senchou?" Marine gave a shocked look.

"Nothing," Marine shook her head.

"What are we waiting for? No chit-chats on the field! Go! go! go!" Choco yelled as they went towards a hotel.

"Why do you think the Minister chose that Usada girl as our leader? She has no knowledge in running this island. We will never win this war!" a guy complained while walking through the hallway towards the command center.

"Why would you doubt the Minister? You didn't know? She's the heiress of the 11th Generation of Usada Family, a family known for fighting with the government for 363 years. Their family is also known for having knowledge in combat without training or studying anything. It's like learning something genetically," the other guy said as he leaned at the wall beside the door.

The door suddenly opened, showing Pekora and Moona leaving the command center room. They immediately saluted. Pekora seemed gloomy as she continued walking outside while Moona was left, she then glared at those two.

"Doubt her or not, I still trust her. She will win this war. Well, do your job now. GO!" She yelled, making those two rush away.

She ran towards Pekora and patted her shoulder, "Shall I train you?" Pekora only nodded.

"Hit me," she commanded.

"o-okay..." she tried punching Moona but she parried it with her left arm and pointed a finger gun on Pekora's forehead using her right hand.

"It's harder than I thought, peko," she sat on the cemented floor.

"Prepare yourself for a month-long training."

"Hah, I'm tired," Marine laid down on a bed of a hotel room.

"We'll occupy this hotel for now," Choco looked outside the window and closed the curtains.

"It's perfectly covered by other buildings, so yeah. We're safe here. But I don't know if we can find another safe hotel once we advance forward," Aqua sat down on a bed beside Marine.

"Tell me Aqua, have you tried holding a gun," Marine asked while laying her front body on the bed.

"I haven't taught her yet, unfortunately," Choco responded instead.

"Will you teach me??" Aqua seemed excited while asking.

"This hotel is very comfortable, isn't it?" Choco sat on a couch and turned on the television

"Breaking News. The Resistance Army, known for occupying Hokkaido Prefecture, has invaded Aomori Prefecture. We are still collecting reports on what's the status but currently, the government hasn't made its move to stop-" she turned off the television.

"Boring news." Choco stared at Marine. "What are you waiting for? A gun? Be right back." She stood up and left the room

"Why don't you try my musket? Muskets are obsolete nowadays but I modified it myself. I named it MRN-17." Marine whispered to Aqua. She then stood, grabbed her masket and spinned it in her hand.

"Reduced recoil and easier control," Marine then pointed her musket towards the window.

"Think fast, Aqua," Choco came back and threw a Colt 1911 and a mag full of ammo. Aqua almost dropped both of them.

"Go ballistic on the gun or some shit, I'mma make some lunch," She then left again.

"Is she your mom?" Marine asked.

"No. Uhm well, she adopted me when I lost my family." she responded as she glanced at her gun.

"I wish she was my mom," Marine sighed.

"I can hear both of you!!" Choco yelled from the kitchen.

Aqua whacked the mag inside the pistol, cocked it and shot the ceiling.

"What the fuck!" A rambling can be heard from the other room.

"Now you can't hear me!" Aqua yelled back at Choco.

"Calm down with that gun, geez." Marine leaned the musket onto the wall, "I'm just gonna sleep."

"Later. I'm still full," she covered his face with an extra pillow. "I'mma teach you too."

"Okay then." Aqua laid down on her bed, staring at the ceiling with a hole in it. She can still hear the artillery shots outside.

Aqua grabbed her phone from her pocket, and saw the caller's name. A familiar name..

Despite all the civilians rushing away from the artillery shots nearby, a black-haired girl holding a katana remained standing. She started walking towards the soldiers who were assigned on firing artillery cannons. The soldiers noticed her and pointed their guns at her.

"Leave this place immediately, civilian. You are not allowed to be here unless you're a part of the Resistance Army!" an officer commanded.

She raised her hands, "I just wanna talk to Aqua-"

"How did you know our Supreme Leader's name?!" he yelled while preparing to pull the trigger.

"Bullshit! Aim your guns, hold!" other soldiers followed him, aiming their guns and preparing to fire.

The black-haired girl threw a smoke grenade, blurring their vision.

"Open Fire!!" he commanded, blasting their guns towards the smoke.

"Hey, Aqua. I think I'm not welcome to join the group." the black-haired girl said.

The soldier who was commanding the others received a beep from his radio, "What the hell did you do to Mio? You almost killed her!!" Aqua was screaming from the radio.

The officer felt embarrassed and knelt to the ground.

"No, no, no. Don't do that. I mean, I would open fire if someone were too shady." The girl named Mio, according to Aqua, shook her head.

"Sorry for what we did, we shall escort you to our Supreme Leader."

Mio sighed as she followed the officer.

"What are you waiting for? I can't hear any artillery shots from all of you!! Get back to your stations!!" the officer yelled to his soldiers

"Sir, Yes, Sir!!" they immediately repositioned as they continued firing their artillery cannons.

"What a day," Mio murmured as she sheathed her katana. 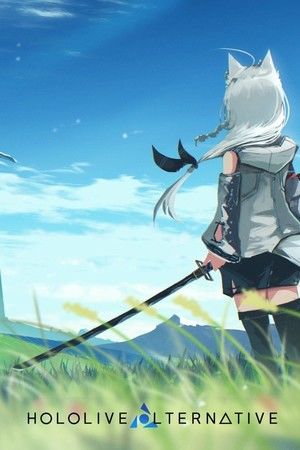