From: Commodore of the KSV “Raven”

Routing in the three-dimensional space

I walked a long path from a regular sperm cell to the commodore of the MID-type space vessel. My story, like the story of any other military astronaut, is unique, full of events back from the event horizon, and slightly unbelievable because, for every crew that successfully handled a sudden malfunction, there are 10 crews that failed.

This is a story about a middle-type space military vessel and its crew, told from the commodore’s point of view. For all of you belowlanders (anyone who is not an astronaut and spends most of the life down below, on the planets), there is no place for the three-dimensional space in this story. All the weird dreams about “merciless darkness” and “unfairness of the space” will disappear in instant, when you lock your helmet, go for a walk outside and see nothing. Literally nothing. There is nothing around. Yes, there are stars, planets, satellites, and other space junk, but these things are somewhere over there, not here. You are surrounded by dark nothing. Space does not have free will, does not have a character or anything. It’s just a place where we hovering in.

Another dream crusher for a young and naive astronaut is generic assignments. In the SAF (Space Armored Forces) you will not see new worlds; will not set foot on unknown planets and breathe in alien air (also, a safety violation); will not make new unique friends. For the average military astronaut, the world is limited to the hull of the combat vessel, and the company is limited to the five idiots who for some reason thought that applying for SAF was a good idea. It’s hard to believe, but almost all assignments are dull, boring, stupid, and boring. Also, boring. And the closer the end of the assignment, the more likely it is that the bored to death crew, in a sudden emergency will take the most idiotic, but the most fascinating, decision.

For the new worlds assign for the Astroexpeditionary Corps.

For the intrigues and evil plans assign for the Intelligence Service Secret Service.

For the new friends, I don’t know, use some dating sites, I suppose.

As for the rare direct engagements with hostiles… they are not that awesome and epic. Like, you packed in a full battle suit, you strapped to the chair. The control room is illuminated only by console displays, the control room has no air to breathe in, gravitation to walk by and the acceleration from maneuvers tossing you around to every direction. But wait, there is more! In such conditions you need to focus on dozens of dull tables with characteristics of your and enemy’s vessels (if there are any); on energy output and energy consumption; damage summaries and ammo counts; a broken and unstable 3D map with weird icons and tons of blind spots. No next-gen graphics for you, nice picture requires energy and processors time, in the direct engagement these things are needed elsewhere. For the sake of awesomeness, I will describe all engagements from the vessel point of view, but keep in mind that “Raven tore space apart” is equal “I was holding back vomit, typed some commands, highlighted some items on the list, and yelled at the pilot”.

It all sounds a bit grim and not exciting, but SAF has one very rare thing: Freedom. Vast and boundless, like three-dimensional space. The HQ is slow and somewhere far and beyond. Most of the time HQ knows nothing, about what is going on in your sphere of assignment. Well, most of the time HQ does not know where you are and what exactly are you doing. And you, as a commodore are free to do exactly as you see fit. And take full responsibility for your actions, lack of actions, for obeying or disobeying orders. Fun fact: there is a severe punishment for following deliberately malicious or deliberately dangerous orders. For a bunch of reasons Katz’s successfully broke down the chain of command, and now they are relying on isolated and independent combat units. This approach works… sometimes. So, it was acknowledged as a partial victory to live with.

I am for the most part is human (father is human, Alliance SAF officer; mother is katz, Katz SAF commodore), but I was trained and served in the Katz SAF. From conversations and joint operations with the Alliance SAF (A-SAF) and Vertikal SAF (V-SAF), I’ve come to the conclusion that your paths are not that different [you were wrong, - Rice]. The small details are not that important and do not bring a drastic difference to the table. Just like the katz race: they look almost like humans, act almost like humans, and can crossbreed with humans. There is only one minor detail: katz have a cat’s ear on their heads. And they think a little bit differently. All and all it’s not that groundbreaking.

Also, I will decrypt all conversations to suit the generic civilian readers. In a real direct engagement, I do not give long and descriptive orders, it would be stupid, pointless, and dangerous. But it will be double as stupid to write something like “4, coat, top-top, AW blink” and then give you a footnote: “Desi, cover the first and second upper parts of the vessel with plasma shields; and overload them at will”, so the decrypt goes first without complicating things up.

I was able to collect [drinking in a spaceport bar and painfully remembering a fascinating conversation in the next day is not “collecting” - Victoria] unique tales from other astronauts from all sides of probable and past conflicts. But every such story is labeled "gossips" because I have no way or desire to verify them.

As a civilian, you can believe in such hilariously fascinating fairy tales as all-powerful secret services; delicate, deeply thought out multi-stage military plans; insidious, merciless, and brutal training camps. In real life, everything about SAF is chaos, clusterfuck, random incidents, temporary solutions that are lasting for years, and as a cherry on top: the magnificent explanations on why the disasters were planned and why we benefited from them.

Everything always goes just as planned because plans are prepared after operations.

And Commodore's memoirs are censored by the Secret Services. 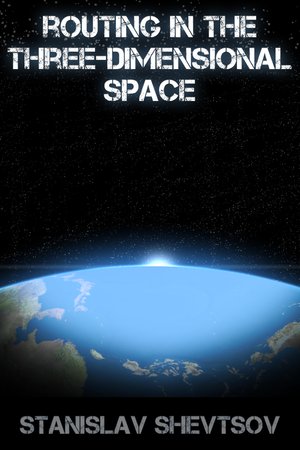 Routing in the three-dimensional space