I returned back to consciousness as fast as I left it. Everything was spinning.

My face slammed against the concrete and a red mark right where my nose was laying. It hurt like fucking hell and It was more than likely broken.

In the corner of my eye, I could see my friend Reji peeking his head over a trash can. He was giving me a look that practically screamed “Stand up! Don’t you dare give up”.

With a trembling hand on my knee, I picked myself up and pushed my back against the dark alley wall.

From what I could make out there appeared to be two stupid ass monsters in front of me. One was pig-shaped and the other lanky.

“For real!? This is it? You're seriously bumming me out, man. I guess the title of 'toughest guy in school' doesn't mean much nowadays huh!?” the lanky one said as he cracked his knuckles. A real tough one we got here.

He can keep talkin' shit but this wasnt even a fair fight. It started as a 1v1 but as soon as things went south for him, his friend/pet hog stepped in. Don't act all high and mighty asshole! Fight like a man!

Well since they were gonna play dirty then I had no choice. Years of working out tirelessly in my garage and practicing all the moves used by my favorite fighting game character -till my fingers were bleeding- honed me into someone who should not be messed with.

The button combinations appeared in my mind. Forward, down, down-forward and punch.

“Rising Demon Uppercut!!!” with a burst of adrenaline I sent myself flying at the smaller of the two. This move in particular was known for its KO potential. Anyone at school unfortunate enough to meet it woke up in the infirmary. This would be no different.

“…!?” That is if it had landed. My vision showed me several of the same asswhipe, none standing in place. I put everything into this attack but with no clear target, I totally missed.

My goal was to hit his jaw and send him flying but I instead hit nothing but air. With my arm high in the sky, my stomach was completely exposed. Perfect opportunity for a gut punch.

Sure enough, that’s what happened next. Not holding back his punch, I felt all the air escaping my lungs.

This was the first time I’ve gotten my ass handed to me in a long Long time by someone other than my mother. I forgot what it felt like. A salty iron taste filled my mouth and back to the ground I went.

“If ya gonna go around callin’ yourself the toughest guy around then you better back it up, huh!? Ha-Ha-Ha!”

God what an annoying laugh…

The one yucking it up was a dropout that went by the name Jazz. Dyed blonde hair, fake ass jewelry everywhere he could put it, and an unbuttoned plaid shirt that dropped over his shoulders -exposed chest for the world to see- he was your typical grade A jackass.

Ok yeah, I might have hyped him up as a monster earlier-one on the same level as The Dark God of Unfathomable Calamity-to make my beating seem a little cooler.

“Alright, you beat his ass. We don’t have time for this.” said a voice coming behind Jazz.

A crazy large hand grabbed Jazz’s shoulder. The fatass finally decided to do something now. He had a similar attire to Jazz but with a bandana around his head and minus the jewelry.

“Huh!? C’mon man, this is just getting fun, I wanna make him scream a little. You can throw around his friend that thinks he’s slick hidin’ over behind the trash can."

“No, you promised to help me get a girlfriend for valentines day.” He said without a care.

“Ha-Ha-Ha! Rock you idiot that’s still like a month away!”

Apparently, fattso was a romantic, guess everyone wants love. Wait, Rock and Jazz? I cringed at their stupid naming scheme.

“Ugh…fine, just give me a sec. You get like this every year, you know that right?” blondie said as he walked over and crouched beside me. He pulled my head up by my rustled black hair. “Ya lucked out kid. I gotta go get my friend a date for Valentine's so we will have to continue this another time, huh!?”

He shoved my face back into the concrete. My shades sent flying. Snow got in my eyes and if my nose wasn't busted before it was now.

“Good luck finding a girl that will wanna go out with you and your messed up face! Ha-Ha-Ha!”

He stood up and kicked me to rub it in. Turning to his friend he gave him a slap on his gut. With a “Let's bounce” and a nonchalant wave directed towards me the two punks walked out of the alley. Laughing the whole time.

I couldn't help but laugh too. It was hilarious really. I had thought no one in my school could ever touch me because I was unstoppable but in reality, it was only because the real tough guys-the ones worth bragging about beating-didn't bother to go to school. My small world had just opened up and I was at the bottom.

I didn't bother even getting up and started rethinking my entire outlook on life when the familiar loud piercing sound of an idiot rammed itself right into my eardrums.

“Do you mind not yelling right in my ear…”

The doofus-with the red hair and mohawk-that was currently wobbling my body back and forth is my best friend. I was walking home from school with him when he bumped into Rock and Jazz. Reji being the idiot he is, started picking a fight and as soon as he could tell they were tough he ran for cover, fully expecting me to handle the hornet nest he stirred.

“Man buddy you look bad... I-i'm sorry I didn't step in but we were outnumbered!”

Outnumbered? In what universe? There were only two of them!

I didn’t know if he heard me with my mouth making out with dirt but I didn't really care. I reached over and grabbed my shades as I tried to pick myself up.

“Erk!” nope not happening, my body is way too sore.

“Here bud. You can lean on my shoulder, let's get you home.”

Normally I would refuse, I wanna look tough after all and his face really pissed me off at the moment but my body insisted on taking him up on his offer.

“When the hell did I say THAT was bothering me!?”

“I dunno, you just look really down.”

Is this guy for real?

My nose was busted and I had bruises all over my body but he instantly thought the issue was me being single. Sure It’s true that I have a world record for the most rejections. Every girl in my school was terrified of me. The last time I asked one out the police were called on me. After that I decided I didn’t need them.

“Why would I need to worry about Valentine's Day? I have a girlfriend.”

Despite what I just said, I'm telling the truth. After my last traumatic rejection, I moved on from real girls and went with something…a little more unique.

A groan came out of Reji's mouth and I swear I heard him mutter under his breath, “Not this again…”.

“Riiight how could I forget. My best pal, the toughest guy in school, is secretly in love with Magical Pom Pom. Could you tell me how you don't get your ass beat every day?”

I could feel my blood boiling.

Magical Pom Pom is the name of a popular magical girl show-beloved by every girl in my city -third season about to air. The shows’ main character is Pommy, the cute cheerleading magical girl who never gives up trying to protect the weak and fights for her friends. I couldn't help but find myself madly respecting her when I first stumbled upon her show three years ago.

“Her name is Pommy you ass! The show is called Magical Pom Pom, get it right!”

“You got guts to say that in front of me. You’re lucky I don't feel like knocking you upside the head right now.”

After I fell in love with her I started buying all her merchandise and writing embarrassing fanfics about her and me. Just last night I wrote a long-ass story about her coming to my world. Reji is the only person besides my mother that knows about my obsession with the show. If anyone else knew, my reputation of being a badass would be destroyed. Having some leverage, he takes any opportunity to poke fun at me about it.

But even though he mocks me about it and is an idiot-plus a huge coward on top-he is a good friend. He has never told a single soul about my embarrassing secret. Hell, there was this one time I woke up late and accidentally wore a Magical Pom Pom themed shirt to school. The whole school laughed at me, I thought that It was finally time to hang up my tough guy coat. But Reji went to every single student and told them about how I “lost a bet” we made when playing a game and I was forced to wear the shirt as punishment.

“Man I’m starvin’ how about we go for some food? How about grilled chicken? My treat.”

“Sorry not today, I don’t want to miss my show. I’ve been waiting almost a year to see Pommy again.”

He facepalmed so hard I think we both have broken nose's now.

(Author's note: This chapter and the next several are a remake of the original chapter 1. I originally wrote the story figuring I wasn't going to do more than a few chapters but as I kept writing the more I discovered that this is a story I want to tell. After plotting out where I want the story to go I decided I needed to rewrite everything. I also wasn't happy with how half-assed the original version was anyways.) 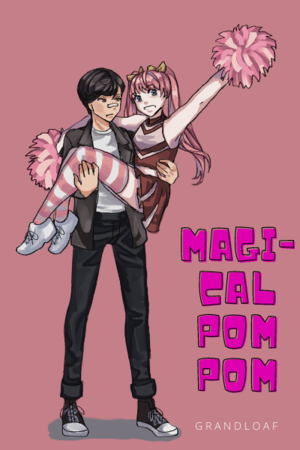