Aside from the day of elections in Noah 3 City, the two weeks of vacation was an actual vacation for Charlotte and her crew. The captain herself spent time just sleeping, getting as massages as possible, enjoying some of the Noah 3 City life, and then sleeping again. It was a vacation that went by a little too fast for her, but then the time came. It was time to put on the uniform again and fly out to another solar system. The job was a specter always waiting for that to happen there too.

After five days into a 10 day trip through Jump Space to the next solar system and running some drills every once in a while to keep everyone sharp, Charlotte also wanted to test her abilities against the computer that learns from her. There was a small set up in the lounge for this test to happen in the best conditions even if it came from a captain tired from the day.

“I’m ready.” Charlotte said, waiting in her chair to begin the test.

“Are you sure you want to do this, captain?” Jinto Barr asked with a virtual reality helmet half a foot over Captain Charlotte’s head. There were small but currently blank monitors meant to show the feed into the helmet on the wall next to her. When the practice starts, everything from the computer and captain point of views will be displayed there.

“I am nervous, yes. But what better way to test myself than facing myself at my best?” Charlotte forced an urgent smile. “Besides I have a da...I mean meeting in a couple hours.”

“If you are sure, Captain.” Jinto placed the helmet over her head. “Show time starts when I count down to zero from three. You copy?”

“I copy Jinto.” Charlotte braced her mental facilities again and tried to empty her mind while the helmet was placed around her head.

Not used to the system yet, Charlotte saw the images of her crew in her head. Whatever orders she gave were answered pretty fast through her own thoughts. Of course to Charlotte, it was real and every member of her crew acted exactly as they usually would in the scenarios fed into her head.

The test involved three stages. The standard accident drill, a battle simulation drill, and an accident drill inside of jump space. Each one lasted for about twenty minutes on average each. Especially since all the scenarios were not expected to last that long in real life, so it was at least accurate even if some of it was pre programmed.

The accident drill itself involved an explosion inside of the ship. A situation where Charlotte had to give commands to save as much of the ship and its crew as possible to ask for repairs later on. Charlotte’s commands were great. Better than average for space commanders, but still lagged a little behind her best reaction score. She had the same result with the battle and jump space drill. Susan walked in during the last one.

Susan and Jinto watched their commander sweat it out for an hour before taking the helmet off. A mostly exhausted Jinto Barr laid her head on the head rest after it was over.

“That was exhausting.” Charlotte sighed while pushing her hands to her head to reset her mind.

“Charlotte, honestly, don’t worry about it. Even if that wasn’t your best, I’m just proud of you for trying.” Susan hugged her.

“Thanks. Is there anything that I can improve on?” Charlotte petted Susan’s arms around her.

“Looking at the monitors, I think you just need to get used to the system, Captain. It’s not healthy to do this multiple days in a row, so I can set this up in three days.” Jinto remarked.

“Three days, huh? I’ll be there.” Charlotte said as Susan let go. “Thanks for your help, Mr. Barr. I’ve a meeting to go to.”

“Have a good meeting, Captain.” Jinto said as the two left the lounge. The helmet easily fit into one of the cupboards in the lounge, so he didn’t mind them leaving.

“So, why do we meet in a hot tub of all places?” Amanda Waters wondered as she met with the four other members of the Noah 3 Council waiting for her .

“This is the captain’s idea.” Melina Lafiel responded. “Something about meetings being stressful, so de-stressing at the same time made the meeting run better.”

“I thought it was because you liked it here.” Steve Mintz stated.

“I thought it was because you wanted to see us half naked.” Susan joked.

“I ummm...well…” Charlotte tried to hide her head again and not notice what the other women were wearing or Steve in his swim trunks.

“Looks like people can see through you, captain.” Amanda Waters laughed. “Not that I am complaining. Could it possibly be all three.”

“...so about this meeting.” Charlotte coughed trying to keep the group on topic.

“Right, right.” Amanda Waters moved her hands in front of her in a specific motion to display holographic screens in front of all of the members in the hot tub.

“So, what is this?” Steve Mintz wondered looking at all the graphs and lists in a short space.

“This is what you asked me to look into.” Amanda Waters pointed out. “This is the citizen satisfaction ratings, a quick analysis that I found for Noah 3 City’s economy, and what they will need in the future.”

“So in general the citizens' satisfaction is currently positive, huh?” Charlotte looked interested. “I suppose that city life seems to be working alright at the moment.”

“That’s right. For the most part, the economics in the city are working as well for a city in a spaceship and there has been enough entertainment to keep high spirits. Some small bits to adapt to a smaller lifestyle, but everyone is getting what they need and more everyday.`` Amanda Waters smiled. “Just some small complaints that can be handled.”

Amanda shifted everyone’s screens to a list. “Some businesses do feel like they need to expand their work and they don’t have as much resources as they need to do that yet. Captain, this is a list of resources I want you to find in this solar system or the next one.”

“Most of them, yes. If anything, the asteroids at our current return spot have most of these if I recall correctly.” Susan looked at them too.

“I think you are right. Should be very easy.” Charlotte smiled. “Ok, we can do this.”

“Excellent.” Amanda quickly shifted to another focus point on the screen and looked at Lafiel and Steve. “Here are some small bits of resources and funding to change from one area to another. Do you think this is possible?”

The two whispered to each other for a little bit.

“We can submit a report to you next week about our findings.” Lafiel said with Steve smiling and nodding.

“I’ll look forward to it.” Amanda looked thoughtful. “So, what do we do now? Meeting adjourned”

“Usually, we just relax a bit and talk about each other. Possibly order food.” Susan remarked.

“Well, that sounds great. Do you mind if I send for my two daughters now? They've been wanting to see our captain for a while."Bookmark here

"Of course you can get them!" Lafiel smiled. "I want to see them too!"

After an exhausting day, Charlotte finally entered her room panting a little bit.

“Make sure you get some sleep, Charlotte. We are going to have a busy day tomorrow too.” Susan’s voice came from the hallway.

“I know, I will see you in the morning.” She waved Susan off who waved back and left.

Immediately changed into a tank top and light shorts and fell asleep under her own covers. After sleeping heavily for a few hours, Charlotte started to have a dream.

It was End. The figure appeared over the dream she currently was having in order to have a discussion.

“You’ve been busy.” End’s voice radiated in her mind.

“Are you expecting something to happen soon?”

“I’m just preparing for every situation after…”

“After I visited for the first time? Why are you scared of me?”

“I...I just don’t understand you. I feel like you are way too overwhelming to me.”

“I see. Don’t worry, I will never mean any harm. You passed my test.”

“Of course you can. I am way too invested in your story to want to destroy it at all. Let me give you a hint at least.”

“While nothing bad is going to happen, there is an opportunity or two that will appear soon.”

“That’s all I will say. Have a good sleep, Captain Medina.”

Then Charlotte’s dreams became the usual until she woke up normally from her alarm. The memory of the conversation was still lingering in her head but it wasn’t as heavy as before.
Bookmark here 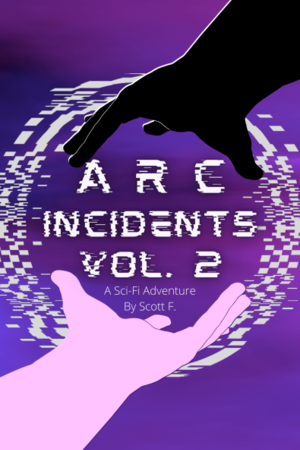